For redistricting in the North Carolina Senate, lawmakers are basing their first decisions on county groupings developed by a team of researchers based at Duke University. This map shows one option for county groupings from the Quantifying Gerrymandering group at Duke. (Image courtesy NCGA)

There’s been a lot of talk across North Carolina about redistricting lately, and one question kept popping up: when are they actually going to draw the maps?

Starting Wednesday, lawmakers will begin drawing new electoral maps for North Carolina. In earlier decades, redistricting went on behind closed doors. But this year, redrawing the electoral districts will be done in public.

Members of the state House and Senate will use a process similar to 2019, when a court ordered lawmakers back to the drawing board to make new maps in the open.

"The process, we believe, will be just about as transparent as we can do," House Redistricting Committee Chair Rep. Destin Hall said Tuesday. "We’re going to give members of this body and the public a transparent process."

The last time North Carolina went through redistricting, courts threw out the maps over illegal gerrymandering. The dispute lasted almost the entire decade. The redrawn maps ended up going all the way to the Supreme Court, which eventually decided that political gerrymandering was not a matter for the courts.

Lawmakers will create the new maps in open committee rooms, with video and audio streamed online. People will be able to watch feeds from the computer stations set up for drawing the new maps.

The public can watch the Senate process from the General Assembly website or in Room 544 at the Legislative Office Building. The room will be open for lawmarkers and legilslative staff to work on the new maps from 9 a.m. to 5 p.m. weekdays until the maps are done. On the Senate side, Sen. Ralph Hise said it should last two weeks. On the House side, the chair did not set a deadline.

The House will follow the same process, working from room 643 from the Legislative Office Building.

“Only maps drawn in full public view will be considered by this committee,” Hise said during a Senate Redistricting Committee meeting Tuesday. Hise, a Republican from western North Carolina, is one of the three chairs on the committee. 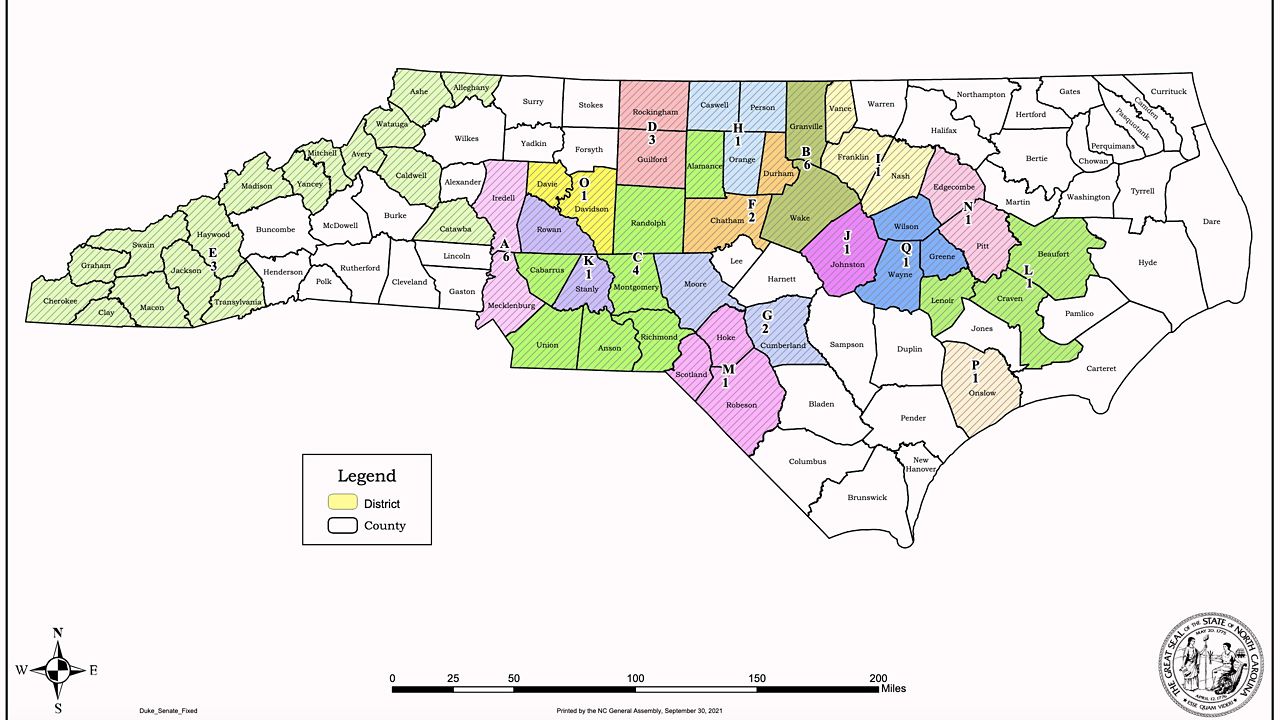 The North Carolina General Assembly is basing state Senate redistricting off maps developed by a group based at Duke University. (Image courtesy NCGA)

Each state redraws their maps every 10 years, using new population numbers from the U.S. Census Bureau. In North Carolina, members of the General Assembly are in charge of making new electoral maps for congressional districts and the state legislature.

One big question in the process this year: where will North Carolina’s new 14th Congressional District go? The state’s population growth over the last decade means North Carolina will have a new congressional district starting next year.

The legislature is on a tight timeline this year because of delays completing the census count in 2020. The population numbers for redistricting are normally released in the spring, but states didn’t get that data until August.

The State Board of Elections has said it wants the new maps completed and passed at least a month before the Dec. 6 candidate filing deadline.

Once the maps are completed, they have to pass through both chambers of the General Assembly. The governor has no veto power over the redistricting maps.

The state Senate and House are using a set of county grouping maps as the starting place for new districts. The grouping maps come from the Quantifying Gerrymandering research group based at Duke University.

As legislators get ready to draw the new maps, Democrats are still arguing to include race as part of the process. The Republican-led committees in both the House and Senate approved criteria that specifically said racial data would not be considered.

Wake County Sen. Dan Blue and other Democrats on the committee said ignoring racial data could be a violation of the Voting Rights Act.

“No evidence has been presented to this committee of racially polarized voting,” said Hise, who chaired the meeting. Hise said racial data was not included in the mapping system that legislators will use to draw the new electoral districts.

Legislators will get to work drawing maps on Wednesday. The room will be open for lawmakers and the public from 9 a.m. to 5 p.m. on weekdays, but the hours could be expanded and may include weekends, Hise said.

They have two weeks to draw the new maps. "Happy drawing," Hise said at the close of Tuesday's meeting.