On Thursday morning, the North Carolina General Assembly will take up the criteria for redrawing the state’s political districts. And at 1 p.m., the U.S. Census Bureau plans to release the long-overdue population data so the state and local leaders can redraw the maps.

Each decade, the federal government does a complete census of the United States. The next year, states redraw the lines for congressional and legislative districts. Many local governments redraw their own political lines too. The population numbers normally come in early April, but delays from the coronavirus pandemic mean the data is months behind schedule.

The last time North Carolina went through redistricting, the state became a national example of political shenanigans and gerrymandering. Lawsuits lasted for years and a judge threw out the maps in 2019.


Because of the census delays, the North Carolina General Assembly and local commissions and councils are working on a much tighter schedule to make new maps. Legislators in Raleigh are hoping to get the maps finalized and passed through the House and Senate by late November, before the Dec. 6 filing deadline for elections for Congress and the state legislature next year.

One of the biggest questions for map makers this year will be just how to fit another congressional district in North Carolina. Thanks to a growing population, North Carolina will get a new seat in the U.S. House of Representatives with a 14th Congressional District.

The census collects all sorts of demographic information each decade, but only a small slice of that data will be released Thursday. The data coming out will focus on what’s needed for redistricting: population change, race, ethnicity, voting-age population and housing occupancy status.

“The purpose is to ensure that voting power and representation are distributed equally,” said Kelly Tornow, a lawyer with the North Carolina State Board of Elections. 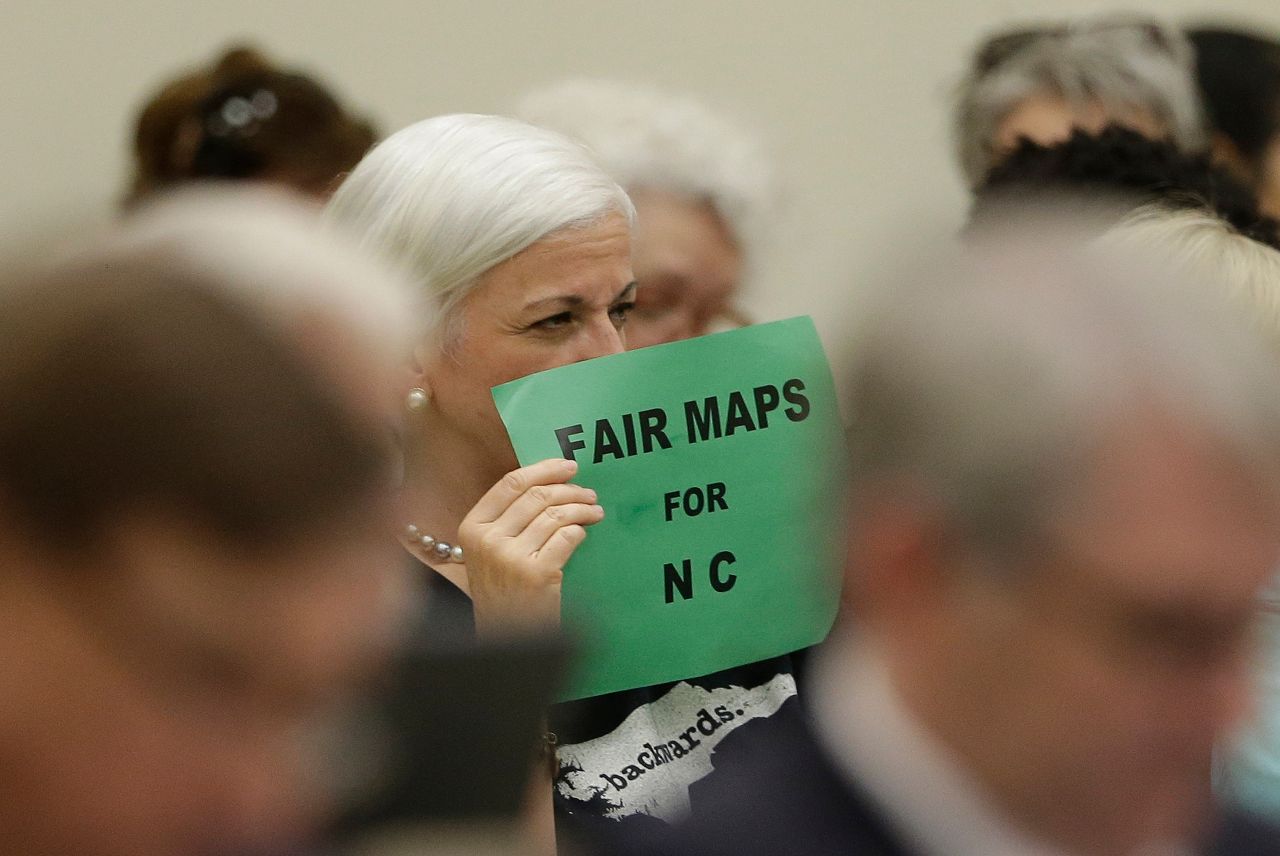 In this July 26, 2017, file photo, a member of the gallery tries to display her sign while lawmakers convene during a joint select committee meeting on redistricting in Raleigh, N.C. (AP Photo: Gerry Broom)

After the contentious map-making and lawsuits of the last decade, all eyes are on the Republican-controlled legislature as they get ready to make new maps.

Gerrymandering means “drawing districts in ways that produce different results that may not be proportionate to the electorate,” Tornow said Wednesday during a seminar for local officials around North Carolina.

“Sometimes is can be hard to determine whether there’s a racial gerrymander or a political gerrymander,” Tornow said. “This can occur when someone’s race is closely associated with someone’s party affiliation.”

The state or local governments could still face lawsuits over political gerrymandering. But, Tornow said, “It’s a higher bar to cross.”

Duke mathematician Jonathan Mattingly, who testified in court cases over gerrymandering in North Carolina, said drawing the maps can change who is in control of the state.

“There was a lot of uproar because there was an election where just over 50% of people voted for one party, and yet that party only got four of 13 seats. So the other party got nine. People immediately got upset about that and said that’s not democracy,” he said in an earlier interview with Spectrum News 1.

Draw North Carolina’s congressional map one way and one party could get nine seats and the other win four. Draw them another way and the results can flip completely.

Mattingly has made a mathematical model to detect gerrymandering in the maps. He said he’s planning to run his model against the maps coming out of the North Carolina General Assembly to see how they perform.

Making fair maps, Mattingly said, is about setting a certain set of principles to make the maps by and then sticking to those criteria.

On Thursday, as the country waits for the Census Bureau to release the new data, the North Carolina General Assembly will be finalizing the list of principals to guide the redistricting process.

The draft rules for drawing the maps mean lawmakers can’t consider race, partisan data or past election results. But they can consider where current elected officials live to keep them in the same districts.

Here’s the draft of what legislators in Raleigh are considering, as of Wednesday afternoon:

Once lawmakers draw up the new maps, they will have to go for a vote in the North Carolina House and Senate just like any other bill in the General Assembly. The main difference is, once they’re passed, the governor cannot veto the bill unless it has any unrelated provisions.

But, as North Carolina saw over the last decade, the maps can end up in court, leaving it to a judge to decide if they’re fair.