Former president campaigns for the ‘Trump Ticket’ in North Carolina

WILMINGTON, N.C. — Taking the stage on the tarmac at the airport in Wilmington, North Carolina, former President Donald Trump repeated familiar themes from his first campaign, railed against the Biden administration and called the multiple investigations against him hoaxes and “witch hunts.”

“We have to elect Ted Budd to the United State Senate this November,” Trump said. He called the Democratic candidate for the Senate seat, Cheri Beasley, “weak on crime” and a “leftwing extremist,” repeating attacks that have become the standard in advertisements against her.

In a rambling, 85-minute speech, Trump focused on his own track record and his grievances, with little mention of North Carolina candidates until about 45 minutes in.

Much of Trump’s speech touched on familiar themes. He repeated false claims about the last presidential election. He called COVID-19 the “China virus.” He claimed Venezuela was releasing prisoners to send to the United States. He called the news media “the enemy of the people.”

He blamed crime and the drug epidemic on Democrats. Trump called for drug dealers to be tried quickly and given the death penalty, a tactic he said he learned from the Chinese leader.

“I’m calling for the death penalty for drug dealers and human traffickers,” he said, to cheers from the crowd.

Budd, who represents North Carolina in the U.S. House, joined Trump on stage almost an hour into the speech. Trump endorsed Budd early in the primary race as his pick to replace retiring Sen. Richard Burr.

Budd won the primary by a wide margin, which many attribute to the former president’s endorsement. But in recent weeks, some pundits have said Budd was trying to moderate and separate himself somewhat from Trump.

Friday night’s event cemented Budd even further as the Trump candidate in the race for North Carolina’s open seat in the U.S. Senate.

“Ted Budd is a conservative ‘America first’ all-star in Congress. They love him,” Trump said. “He will always defend your safety, your jobs and your North Carolina values.

“Ted will vote to stop the radical Democrats' inflation-causing spending binge, and he will unlock American energy and bring prices way down,” Trump said. “Ted has been rock solid on defending our borders. He helped build the wall.”

Standing beside the former president, Budd praised and thanked Trump. 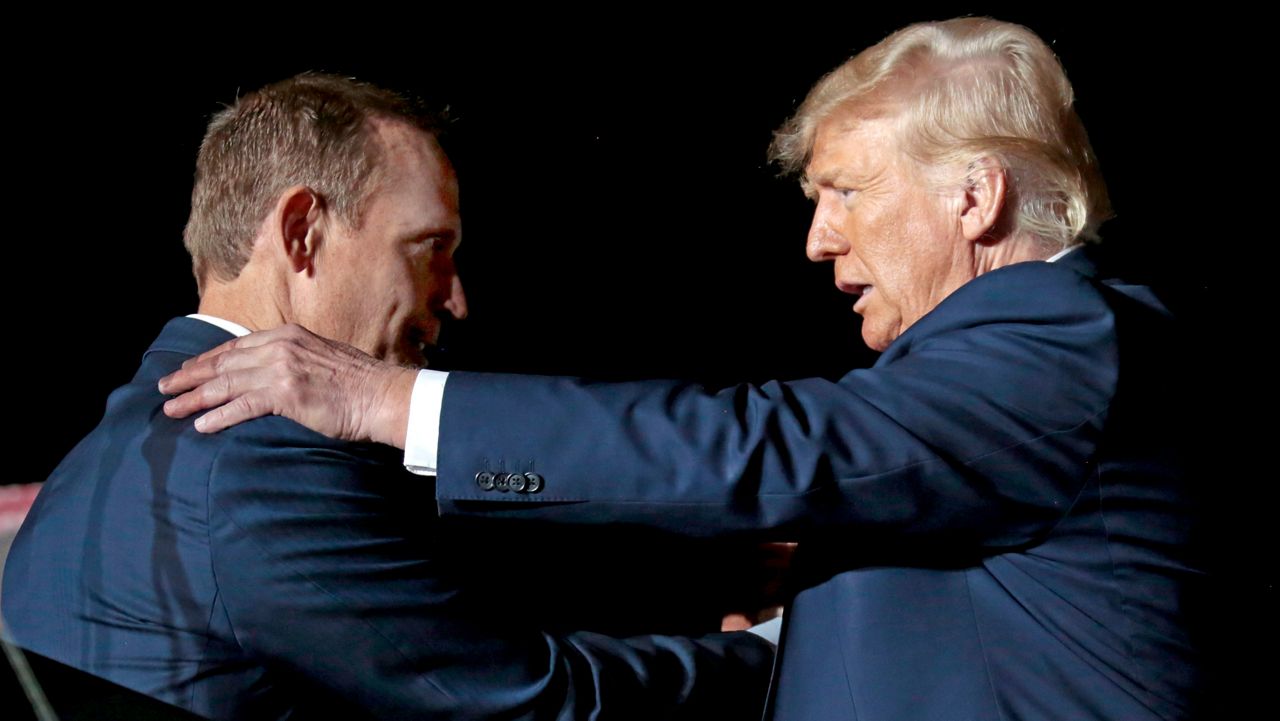 “We are ready to stop the Biden-Beasley agenda and make America great again,” Budd said.

“When it comes to the America first agenda, President Trump didn’t back down. And when you endorsed me, you said, Ted it’s because you didn't back down. So I want to let you know I’m not going to back down,” Budd said.

Responding to attacks after Friday night’s event, the Beasley campaign said, “Tonight Congressman Budd and Donald Trump spread despicable lies about Cheri’s record that have been debunked repeatedly and even resulted in ads being removed from the air for being false.”

“Not only is Congressman Budd an election denier and extremist who has worked to undermine our democracy and take away our freedoms, he will lie and fear monger unabashedly in his desperate attempt to cling to power,” the Beasley campaign said in a statement.

The rally also featured speeches from other top North Carolina Republicans running on the “Trump Ticket.”

The candidates blamed the Biden administration for inflation and rising gas prices. They also called for tougher policies on immigration and reminded the audience of the withdrawal from Afghanistan.

In a midterm year with the Democrats in control, the Republicans should be expected to perform well on Nov. 8. But the growing legal troubles around Trump, his false claims about the last election and the investigation into the Jan. 6 attack on the Capitol have made this year an atypical midterm.

Add the Trump factors to the Supreme Court’s ruling over the summer to overturn Roe v. Wade, and some think Democrats could do better than expected.

One top political topic that did not come up from any candidate Friday evening was abortion. The candidates instead kept their message on attacking the Biden administration.

“​​Each and every one of Joe Biden’s policies are on the ballot this year,” Budd said. “If you want to stop Joe Biden, you have only one choice on your ballot.”