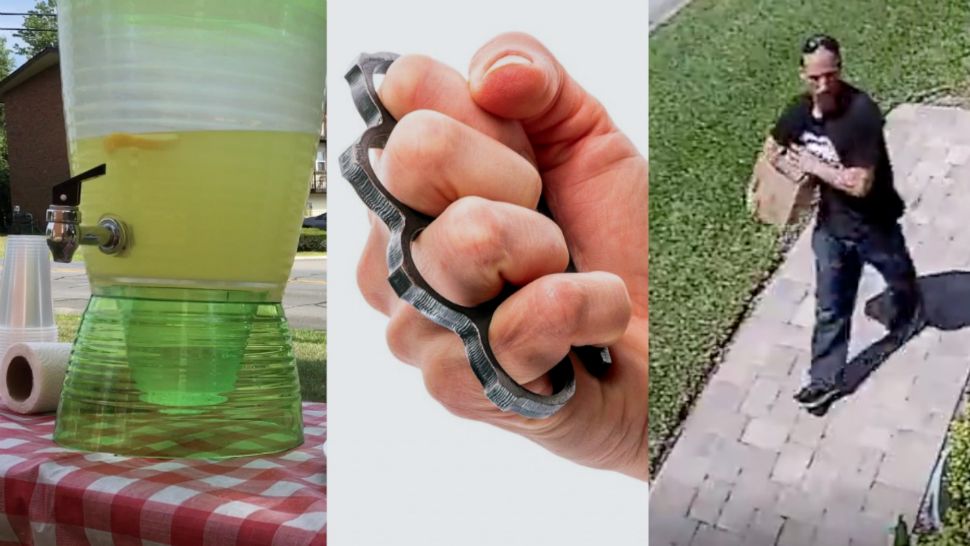 A lemonade stand, brass knuckles, and a man stealing a package appear in this collage. (Spectrum News footage)

New Texas Laws Going Into Effect September 1: What You Should Know

Here are a few that you should take note of:

A new state law will make it easier for survivors to move on by concealing their criminal history. Another bill signed into law, HB8, aims at tackling the state's rape kit backlog. The new law gives sexual assault survivors seven days to have a forensic exam done, instead of five days. It also creates a timeline for labs to test rape kits within 90 days of receiving the evidence, and prohibits the state from destroying the rape kit for 40 years.

Starting September 1, you'll be able to leave brewery taprooms with a case of your favorite craft beer. It will allow breweries to sell beer to be consumed off-campus, just like wineries and brewpubs do.

​Children will now be allowed to sell non-alcoholic drinks on private property, meaning you may start seeing more of those old-fashioned lemonade stands along your neighborhood streets in the near future.

A new law strikes brass knuckles from the list of prohibited items a person can own. Yes, that means those keychains shaped like cats with pointy ears, made to be used in a manner of self-defense, are no longer banned.

Cough syrup can no longer be sold to minors. A business must now check identification for anyone attempting to purchase cough suppressants, unless they appear to be old enough. In large doses, the active ingredient in most cough suppressants can cause a "high" feeling.

A bill was signed into law prohibiting telemarketers from conducting "spoof" calls. The law states that anyone putting false information out in Caller ID is a potential violator and could be fined $1,000 per call.

A law has been updated that will further crack down on hazing and coerced consumption of drugs or alcohol that leads to intoxication. Also, any person who voluntarily reports hazing will have immunity from liability in certain situations.

A new law allows people in Texas to show digital images of hunting and fishing licenses or by pulling it up on the Texas Parks and Wildlife website.

Porch pirates that steal packages could now go to jail from a new law that makes it a felony to steal mail. Mail theft is already a felony under federal law but had only been a misdemeanor under state law.

There are hundreds of more laws going into effect Sept. 1. Take a look at all of the laws that passed this legislative session.