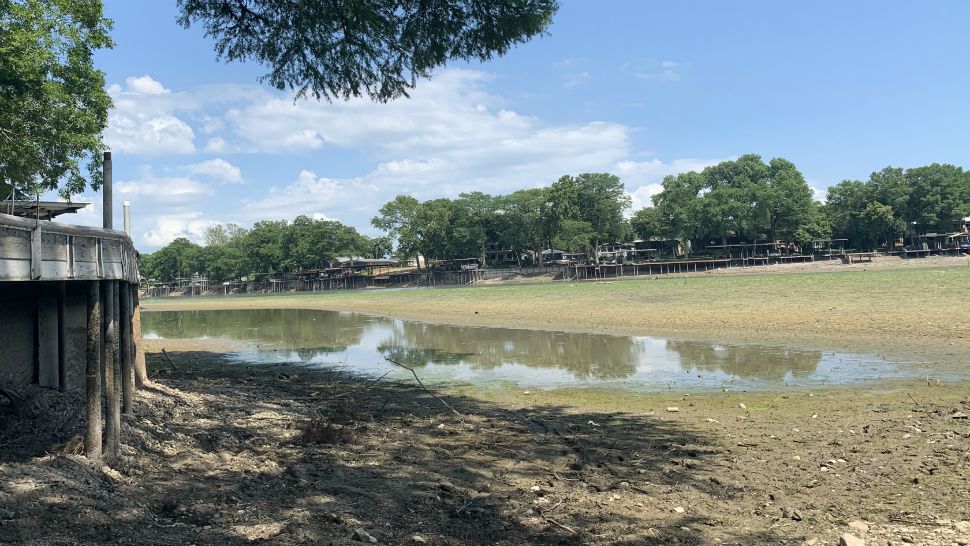 What's Next for Lake Dunlap? What We Know and What We Don't

NEW BRAUNFELS, Texas -- About a thousand people came out to a town hall Wednesday night hosted by the Preserve Lake Dunlap Association.

It was the first time residents heard directly from Guadalupe-Blanco River Authority representatives about the spill gate failure at the Lake Dunlap dam. And although some clarity was provided, some questions are still lingering.

Packed house here in New Braunfels for the Preserve Lake Dunlap Association meeting with @GBRATX and local elected officials.
-Replacement needs, -how we got to this place, -ongoing work, and -what is needed to begin construction will all be addressed tonight. pic.twitter.com/VmO1EeO9gq

But before getting into what we don't know, let's go back to the beginning to address what we do know.

On May 14, 2019, the middle spill gate at the dam at Lake Dunlap failed. Engineers with GBRA said it was due to aging steel. A preliminary investigation reveals this failure was different than what happened at Lake Wood in March 2016 when the tie bars failed.

Lake Dunlap's tie bars were repaired in 2012. Engineer Charlie Hickman said aging gate hinges were the likely cause of the May 14 failure. Due to high river flows, GBRA has not been able to recover the failed spill gate and cannot do a more thorough investigation of what happened. There's also no way to repair the gate without draining the entire lake.

"There is really no simple or effective way to go in and even work on those gate hinges with that gate in place," Hickman said.

In November 2017, GBRA selected engineering consultant Black & Veatch to design replacement dams. Thirty percent of the design is complete for Lake Wood, and Lake Dunlap's design is in the works. Hydraulic Crest Gates will replace the existing bear trap gates. The dam would need substantial modifications to the center piers to beef up the strength.

"This is a solid steel gate, it's rigid and designed to take the impact of all that debris that comes down. It's operated by hydraulic cylinders on either side," Hickman said.

Hickman noted that those particular gates would give them flexibility in setting a lake elevation, getting Lake Dunlap back to normal within a few years.

Temporary fixes to bring up the lake level like sheetpiles were ruled out, due to the fact that construction would take more material than what's readily available, meaning it would need to be fabricated, at a cost of at least $6 million. There's also the possibility that a temporary fix could cost an overtop of the dam.

After 9-12 months of engineering, construction would take an additional 28 months to complete. But, what would it take to even begin construction? That's the huge problem - it would take a huge amount of money.

Over five decades, GBRA has invested $25 million in repairs, but hasn't been able to create an emergency fund due to the agency lack of hydroelectric customer base and revenue. It would cost $28 to $35 million to fix each of the six dams in the river system.

"For GBRA, it really is about a $190 million problem. A multi-partner funding relationship is needed to fund the ongoing operations and repairs," Hickman said.

State lawmakers also tried getting funding, but were racing against a ticking clock of a legislative session.

"Our biggest opponent was timing. If that spill gate would've broke in February, we would've had a better chance. But it didn't, it broke a couple weeks ago and the budget was all but sewn up by then," said House Rep. John Kuempel, R-Seguin.

So what questions remain? ​What will the impact be on the tax revenue? While area appraisal offices spoke at the meeting, most property value questions can't be answered at this time.

Could GBRA get a loan? Patteson said GBRA likely wouldn't qualify for a federal loan due to the lack of sufficient revenue generated through the hydro system. Money from a FEMA flood relief program likely wouldn't be an option either because the dams are not flood storage structures. GBRA is still on the hunt for grant money.

Other funding options have been floated like forming a taxing district, but that would be up to local elected officials and would need to be voted on. GBRA is also considering allowing the county to partner in ownership and cost-sharing.

PLDA representatives said this will not be the only town hall they will host, and hopefully with each meeting comes more answers about what's next for their beloved Lake Dunlap.

If you couldn't make the town hall meeting with Preserve Lake Dunlap Association and @GBRATX, here are the two presentations that were shown!
Dam Failure and Future: https://t.co/rbmn2Nuijw
Lake Dunlap Q&A: https://t.co/H4YsOo1Dyp pic.twitter.com/XeJTvoe3SG