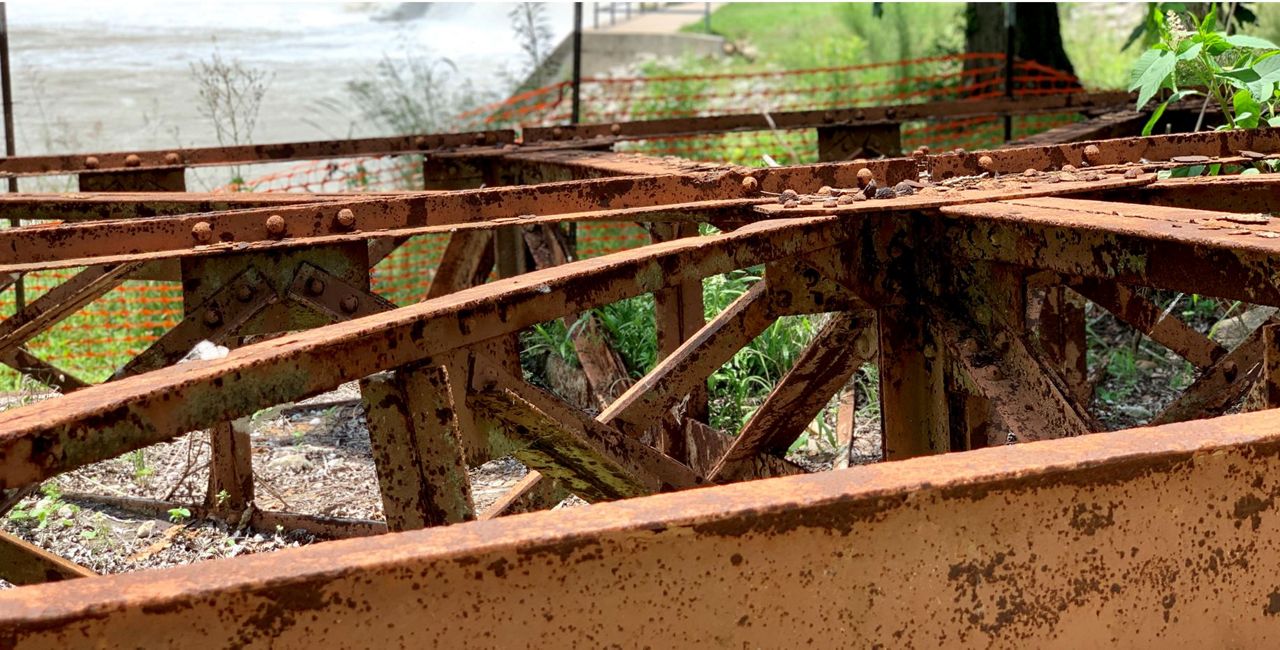 A piece of the spill gate that failed in 2016 sits on the bank in front of the dam at Lake Wood in Gonzales, Texas. (Stacy Rickard/Spectrum News)

GONZALES, Texas -- In a statement, Guadalupe-Blanco River Authority is comparing the Lake Dunlap spill gate failure Tuesday morning to one that happened in Gonzales at the dam at Lake Wood in 2016. That dam has still not been replaced or repaired.

Residents of Gonzales downstream of the Lake Dunlap along the Guadalupe River know the feeling all too well of losing a beloved lake. Once a "well-kept secret lake" as the community calls it, is now more like a forest of trees and brush.

"We would boat, we would jet-ski, we would fish," said Gonzales resident J.R. Anderson. "My son, I introduced him to water. Since that time, he's now had children and we now have grandkids that we were looking forward to having be able to enjoy the lake."

"All growth since the lake went dry. You talk about a fishing paradise in two to three years. Fish laid eggs all over this place."

Solansky and Anderson have lived along Lake Wood for decades. When the spill gate failed in March 2016, Lake Wood was completely drained by the end of the day.

"After the water went down, we were able to observe that the lower part of the bear claw gate had been ripped from the dam and washed downstream," Anderson said.

The piece of the spill gate is still sitting on the bank by the dam, rusting and serving as a constant reminder of the dewatering of Lake Wood.

"As we've gone through this three-year period, a number of people have lost hope, they've become very frustrated, very disappointed in the river authority," Anderson said.

The six dams on the river system maintained by the Guadalupe-Blanco River Authority were built in the late '20s, making them nearly a century old.

"So I don't know if they thought this was going to last forever or if it was intentionally forgotten about," Solansky said.

Here’s another look at the dam at Lake Wood where a spill gate failed three years ago. @GBRATX says improving each of the six dams on their river system would take 2-3 years at a price tag of $15-$35M. pic.twitter.com/XPElAER1PK

With the spill gate failure at the dam at Lake Dunlap on May 14, the community hopes it will be what it takes to move forward with improvements on Lake Wood dam.

“We have renewed hope that their tragedy and catastrophe will reignite public interest in finding solutions and securing funding to repair both dams," Anderson said.

GBRA estimates each dam fix could cost $15-$35 million, with an estimated timeline of two to three years of construction at each site.

"That's been our issue that we've had is getting some timeframes, getting something literally in concrete about what's going to be done there," Solansky said.

GBRA said engineering designs are underway to improve all six dams on their river system, but moving forward with improvements depends on funding.

"We hope that Lake Wood is in their budget. That's what we're hoping for," Solansky said.