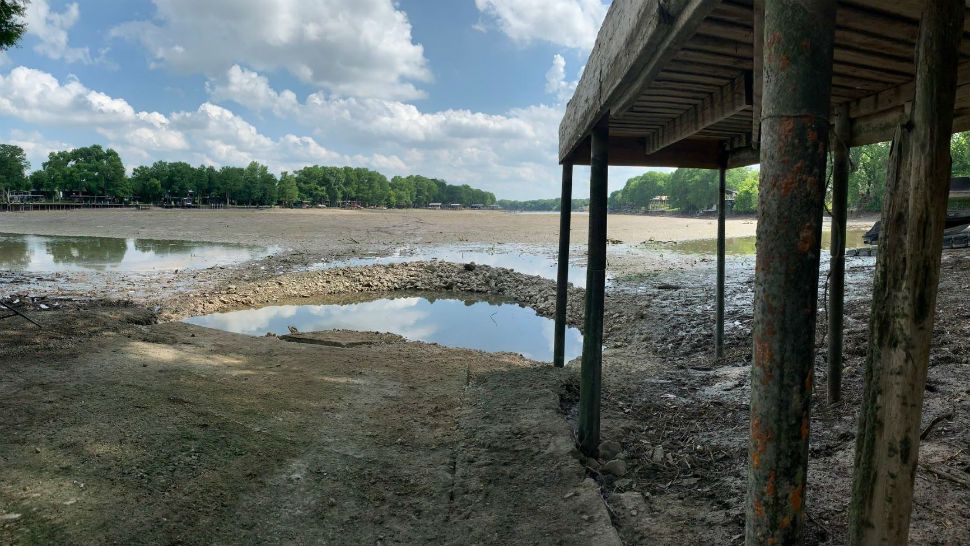 Water levels at Lake Dunlap are significantly lower after a spill gate fail at the dam. (Stacy Rickard/Spectrum News)

The Guadalupe-Blanco River Authority said it's unclear why the spill gate failed.

Around 8 a.m. Tuesday, the middle spill gate broke off and sent water rushing downstream. Since then, the GBRA has opened up the two other spill gates.

This is the moment when one of the spill gates failed at Dunlap Dam Tuesday morning in New Braunfels. Lake Dunlap is now partially drained.
(Courtesy: GBRA) pic.twitter.com/sBjN3ZHNBU

The failure caused the water on the Lake Dunlap side to recede. At this point, it's dropped about seven feet, exposing decks along the river.

There's no timeline for when the lake will be recreational again.

Looking at the view of a once full Lake Dunlap from a boat ramp off Schumans Beach Road. The levels have dropped significantly since the spill gate at the dam failed Tuesday morning. There’s no timeline on when the lake will be recreational again. @SpecNewsSA pic.twitter.com/idKK4iQWz1

GBRA spokeswoman Patty Gonzales said while no evacuations were necessary downstream, people that live along the water were told to take precautions and tie off or remove recreational items as the currents are rushing out at 11,000 cubic feet per second. At this point, Gonzales said no damage has been reported.

As far as the dam goes, the cost of repairing will be immense. The structure is nearly a century old. Gonzales said engineers have been designing new gates for each of the six dams GBRA manages, but the price tag could be tens of millions of dollars for each.

"We have been looking for grants, federal funding, that sort of thing. This is an ongoing project, Gonzales said. “ It's been an ongoing project for a very long time but right now, we can't speak to that. Our immediate concern is of the safety of the crews working on the dams, and of the people downstream."

Gonzales said this failure is similar to one that happened in the neighboring city of Gonzales three years ago at the Lake Wood Reservoir. That dam has not been fixed since it failed in 2016.

Officials with the GBRA issued the following statement:

GBRA experienced a similar spillgate collapse at Lake Wood, four miles west of Gonzales, in 2016 caused by a failure of structural steel members inside the gate. While the cause of the failure at Lake Dunlap will not be determined until further investigation, it is currently believed the failure at Dunlap is also related to aging structural steel.

“We recognize the value of Lake Dunlap to the community. GBRA is committed to finding a solution to replace the spillgates at all of our aging dams,” said GBRA General Manager Kevin Patteson. “The ability to move forward with construction at Lake Dunlap, Lake Wood, and the other dams is dependent on securing funding for these multi-year, multi-million dollar projects.”

After the gate failure at Lake Wood, GBRA engaged consulting engineers to determine the most feasible solution for repair or replacement of the spillgates in the hydroelectric system. The result of this analysis led to GBRA’s decision to replace all of the aging spillgates with a more modern gate system. In 2018, GBRA began the design of hydraulic crest gates for Lake Wood, and is currently progressing with a design which will involve replacement of the spillgates along with modifications to the concrete structure of the dam. The design, which will take approximately a year to complete, will be similar for the other dams in the system, including at Lake Dunlap.

These improvements are expected to take two to three years for construction at each site, and require approximately $15-35 million per dam. GBRA’s revenues alone cannot support that level of investment. GBRA is continuing to research all available funding opportunities through state and federal resources, as well as stakeholder partnerships. Updates will continue as additional information becomes available.