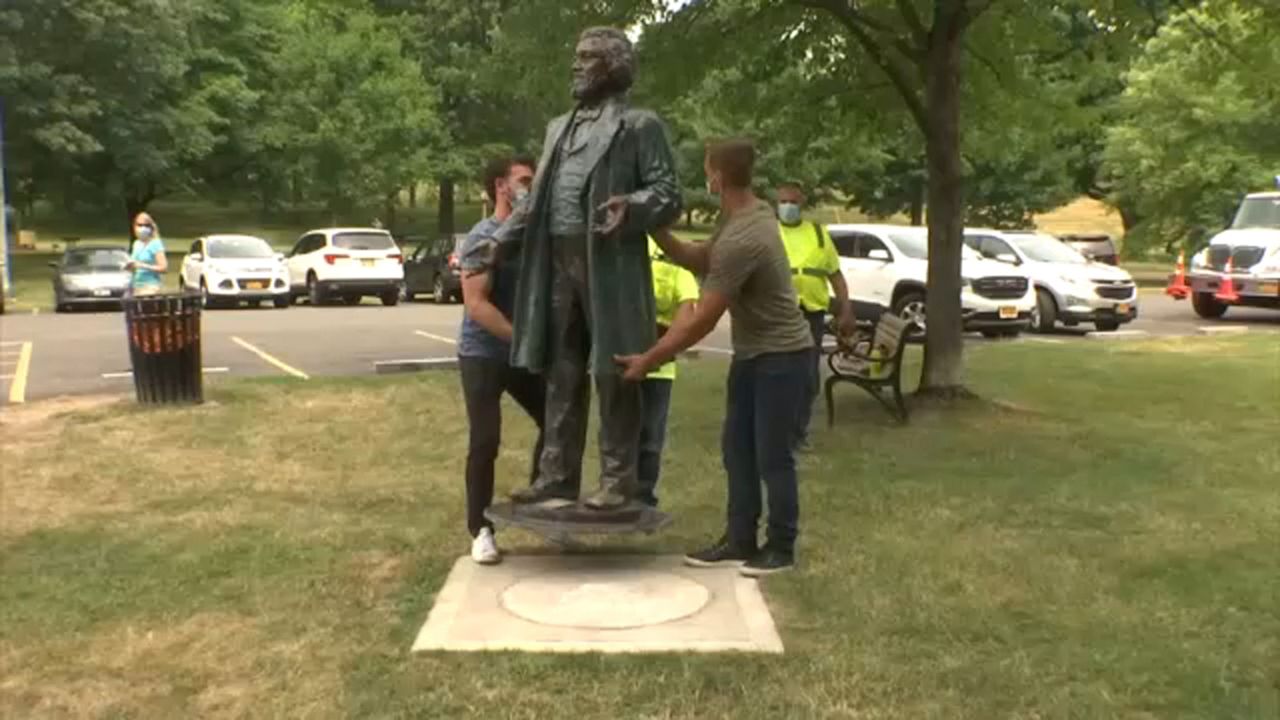 Whether they knew the significance of the date or not, vandals who destroyed a Frederick Douglass statue in Rochester did so on the 168th anniversary of one of the abolitionist’s most notable speeches. That message was not lost, as a new statue went up in its place at Maplewood Park Thursday.

The city truck parked in the lot at Maplewood Park contained some precious cargo. A piece of true Rochester history.

Police say the original statue was ripped from its base and later found 50 feet away leaning up against a fence overlooking the Genesee River.

"I would hope that when people see Frederick Douglass and this interpretation of him, that they will remember that love is still alive," said Olivia Kim, the artist who helped create a total of 13 monuments to Douglass which are placed in different spots around Rochester.

Members of the community were upset by the incident with some saying they believe the act was committed by a person or persons who are against the Black Lives Matter movement.

"I was sad someone would have such hatred," said Michele Saccente, as she showed a photo of herself next to the statue, taken just three days before it was vandalized.

The destruction of the statue gained national attention and even a reaction from President Donald Trump.

"I definitely felt sad," said Kim. "There was really no place to put that sadness."

Police never found the vandals. The destruction took place on the 168th anniversary of one of Douglass’ most powerful speeches, "What to the Slave is the Fourth of July," which argued against the continued existence of slavery.

A fundraising campaign will raise money to craft another statue, as well as covering the cost of maintaining the existing ones.

It's not the first time a Frederick Douglass statue has been vandalized in Rochester. Two St. John Fisher students were arrested for damaging a Douglass statue at Tracy and Alexander streets in 2018. John Boedicker and Charles Milks tried to steal another Douglass statue after a night of drinking. As part of their punishment, they had to visit all of the similarly-named statues in the city. Despite repaying their debt for their crime, both asked organizers to assist in the placement.

"The emotion and the pain that went through the community when we tore down the statute the first time, it stuck with us," said Milks, who now lives in Buffalo. "Just to be back here, to help put a new one in is a step in the right direction."

A small step, but an important one.