President Joe Biden served the stuffing. First lady Jill Biden gave out scoops of mashed potatoes. Soldiers, airmen and their families from Fort Bragg lined up for the Thanksgiving feast.

For his first Thanksgiving in office, Joe Biden continued the presidential tradition of visiting with members of the military to celebrate the holidays.

“You do so much and your families give so much,” the president said to the gathering of about 250 service members and their families. “You literally are the finest the world has ever seen.”

“The thing that's amazing to me is how proud I am to be your commander, and you are the most incredible group of women and men that we've ever seen. And so, I just want to thank you so much,” he said.

"The Bidens are a military family,” the first lady said, introducing her husband. “I know what it’s like to see that empty seat at the table.”

"I want to thank all of you. That's why we came to have dinner with you to say, 'Thank you' to you," she said. “We cannot thank you enough."

The troops gathered in a hangar on the runway at Pope Field. The massive hangar door stood open through the meal, with Air Force One parked directly outside.

The entire room stood at attention as the Bidens entered and spoke briefly before getting down to business and serving up a traditional Thanksgiving meal, complete with turkey, ham, candied yams and brussels sprouts.

Fort Bragg is the largest military base in the United States. More than 53,000 soldiers are stationed there, according to the U.S. Army. The presidential visit comes just months after Biden oversaw the final pullout from Afghanistan. 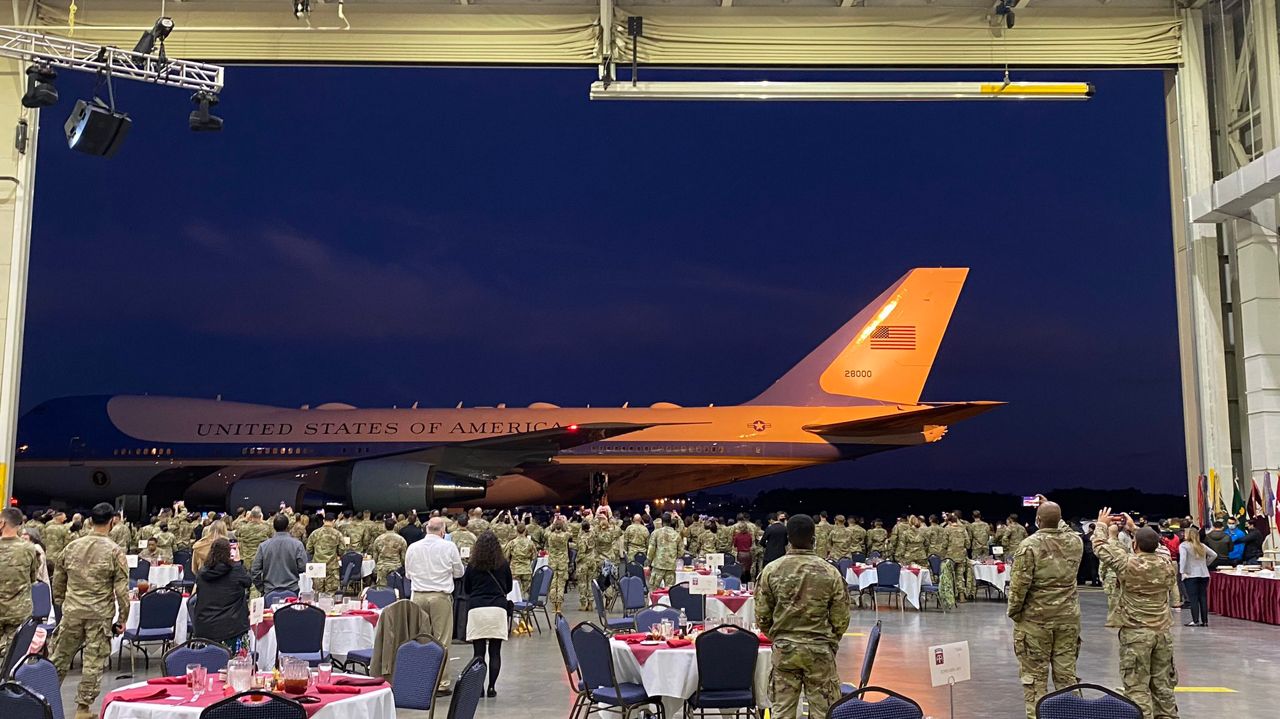 The president and the first lady served the meal in a hangar at Pope Army Air Field, with Air Force One parked directly outside the large hangar doors. (Photo: Charles Duncan)

“I know this year a lot of people are excited to have family home. They’ve been going nine months, 10 months, years,” said Staff Sgt. Schaffer. “It does feel different. I’m glad I’m home this year.”

“The thought of having to go somewhere does linger in the back of my mind, because that’s our job. But I know my family is thankful,” he said. The same is true for his friends at Fort Bragg, where he’s been based for eight years.

“It’s always exciting when the higher-ups come down,” said Sgt. Denasia Patterson, who was waiting in line for a COVID-19 test Monday afternoon before joining the president’s Thanksgiving celebration.

“It shows that they’re basically in-tune with the soldiers,” she said. “It’s good to see their faces around here and give support to the soldiers and their families.”

The event was invite-only for the soldiers and their families on the base.

“Everyone is excited, everyone’s been talking about it,” Patterson said.

North Carolina Gov. Roy Cooper and his wife, along with the state’s five Democrats in Congress, also helped serve dinner to the troops Monday night.

After serving dinner, the president went table to table, greeting the service members and their families, shaking hands and posing for photos.

He spoke with the groups at each table. The young soldiers gathered around and leaned in to listen as their commander in chief spoke.

The president and first lady spent about two hours with the troops at Fort Bragg. They applauded Biden as he left the hangar. But instead of getting back on Air Force One, the Bidens took a detour on base where they met privately with members of the special forces.

“These men and women often serve as the ‘tip of the spear’ in our nation’s military operations, and the president wants to convey his and the nation’s gratitude for their continued service and sacrifice,” the White House said.