An N.C. Town Just Voted to Allow Alcohol Sales. It’s Really About Getting a Grocery Store.

TRINITY, N.C. — BBQ Joe’s sits just off of Interstate 85 south of High Point in a little town called Trinity. Joe’s is one of the few restaurants in Trinity. There’s a Subway around the corner and a diner down near the high school.

The closest thing to a grocery store in town is a Dollar General, but folks here can always drive down the road to Thomasville to go to the Food Lion.

City leaders say the biggest reason they can’t get a grocery store or a steakhouse to set up shop in town is because it is one of North Carolina’s few remaining dry towns. Well, until now. The town’s voters, almost 4,000 of them, approved five referendums to allow alcohol sales in the city limits during the Nov. 3 General Election.

Trinity has been a dry town since it was formally incorporated in 1997. The rural corner of Randolph County was the original home of Duke University, then called Trinity College, before the school moved to Durham in 1892.

Taking a short break from chopping barbecue at Joe’s, Derrick Howell, who goes by “Big E,” said, “We would like some neighbors. It gets boring in all these cornfields by ourselves.”

The property just across N.C. 62 from Joe’s is a big cornfield but zoned for commercial. It could be a perfect spot for businesses that want to pull traffic from the I-85 exit just on the other side of the field.

The rest of the Triad region has been growing steadily for years, at least before the coronavirus pandemic. But the growth in new businesses seems to have skipped Trinity.

Johnson, who said he does not drink, described a grocery store as “a community service” and something that could bring more economic activity to the area.

“Life is about choices, not about what you believe,” he said.

“I would really like to see some kind of high-end steakhouse,” he added. 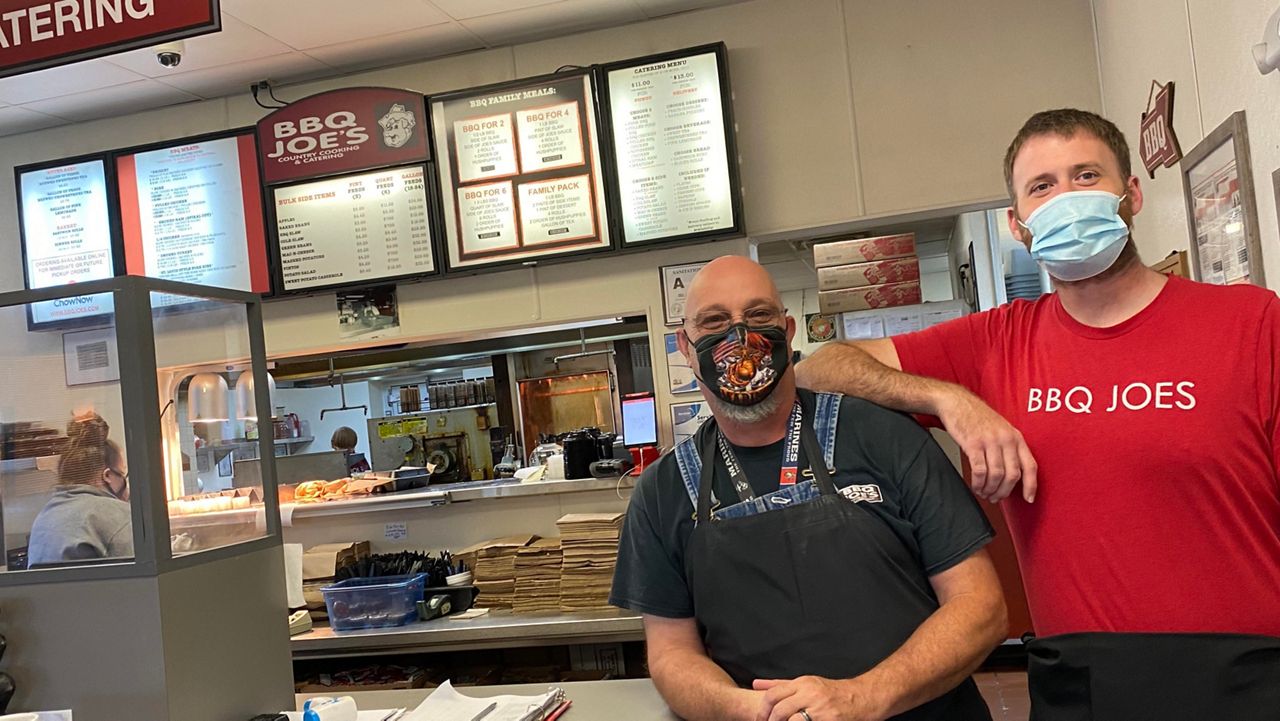 Johnson said he thought the town was ready to try another vote on alcohol sales. Trinity voters went to the polls twice before, in 2011 and 2007, to vote on alcohol sales and both times they rejected the measure, according to local newspaper reports and voting records.

But this year was different. Johnson said he heard from residents about getting a grocery store during his own reelection campaign last year. With a presidential election on the ballot and high turnout expected, he said it was time to put the question to voters one more time.

Voters overwhelmingly supported five different questions on the ballot to address different types of alcohol sales in the county, including on- and off-premises and mixed drinks. The votes all averaged about 60% for and 40% against.

“We have residents that want grocery stores, want restaurants,” she said, noting that more housing developments are in the works in Trinity and with the new homes comes new people.

The alcohol vote almost didn’t make it on the ballot. When City Council brought the referendums up for a public hearing in July, the residents who spoke were split on the idea, according to the meeting minutes.

The council ended up voting 3-2 to put the question to residents.

Howell, at BBQ Joe’s, said he could see both sides of the question. “They like their country area,” he said, “but it’s growing all around us.”

Now that voters approved alcohol sales, it’s up to businesses to get permits from the state ABC Commission. There are a couple of businesses that could be in a position to get the first permits, including a Sheetz gas station just down the road from BBQ Joe’s.

The Sheetz even has a big cooler that in any other town would be called the “Walk-In Beer Cave.” But in Trinity, the gas station chain has a sign on the cooler door for its “Walk-In Soda Cave.” 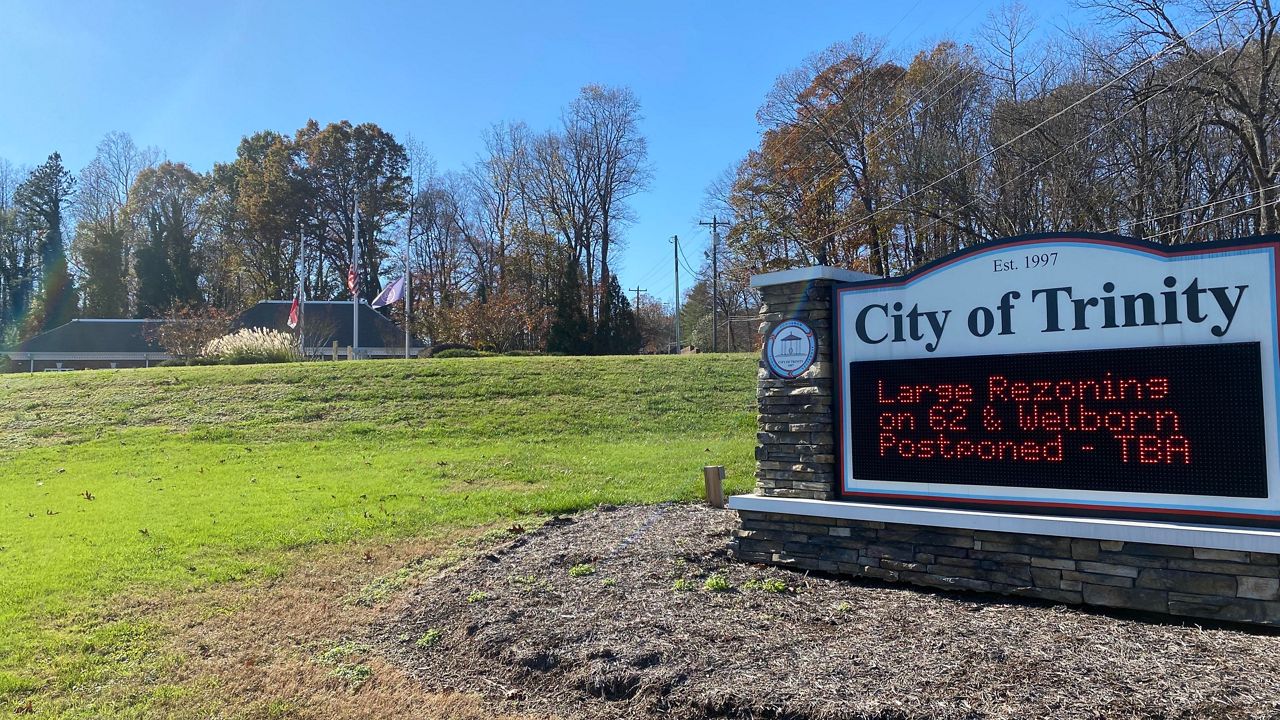 Trinity, North Carolina, was founded in 1997. The corner of Randolph County is the home of Duke University, then called Trinity College. (Photo: Charles Duncan)

“The biggest thing that it means is to get some economic activity,” Trinity Mayor Richard McNabb said. “People kept asking to council, ‘What are we doing to get a grocery store?’”

He said Trinity is well poised to grow into a thriving bedroom community like Kernersville, about 20 miles north.

Listing off his pitch for why Trinity could be the next bedroom community for the Triad, McNabb said, the city is along I-85 with easy access to the highway, taxes are cheaper than surrounding towns, and it’s a 20-minute drive to employment centers like Greensboro and Lexington, McNabb said.

“We’re just in a good location for the Triad,” he said.

Johnson, the City Council member, said there’s one development with the potential for almost 700 new homes already approved and another that’s just as big under consideration.

McNabb said he’s watched how getting one big retailer like Walmart in a community will spur economic activity and bring other businesses to open up nearby.

The alcohol vote won’t immediately flip the switch on economic development in Trinity. There’s still the coronavirus pandemic to contend with, and then there’s all the zoning, financing, and bureaucracy that goes into getting big developments approved and built.

But Johnson thinks Trinity could have a grocery store of its own in the works in the next year or 16 months.

There’s no telling what will happen with the cornfield across from BBQ Joe’s, but if a grocery store chain wants to open up and sell beer and wine, now it can.