More than 4,000 have already cast their ballots at the Roberts Park community center in Raleigh, North Carolina. (Photo: Charles Duncan)

“Motivated with a Passion”: Voters Line Up to Cast Early Ballots

RALEIGH, N.C. — More than 1.6 million people in North Carolina have voted early or cast absentee ballots as of Sunday night, according to the State Board of Elections.

At Roberts Park, just east of downtown Raleigh, the line was short during lunchtime Monday.

Jerome Brown, chair of the Wake County Voter Education Coalition, sat with other volunteers under a tent near the entrance to vote, talking to voters and handing out voter guides that lean heavily Democratic.

“People are motivated with a passion,” he said. “We didn’t see that in 2018.” Brown said this is his fifth election cycle working with the coalition on voter education outside the polls in the East Raleigh community.

Brown said he’s been setting up their voter education tent each morning between 6 and 6:30. He said people have been lined up early since voting began, even on Friday despite the rain and cold.

Almost 80,000 people have voted in Wake County as of the end of the day Sunday and almost 4,000 of those were at Roberts Park Center. 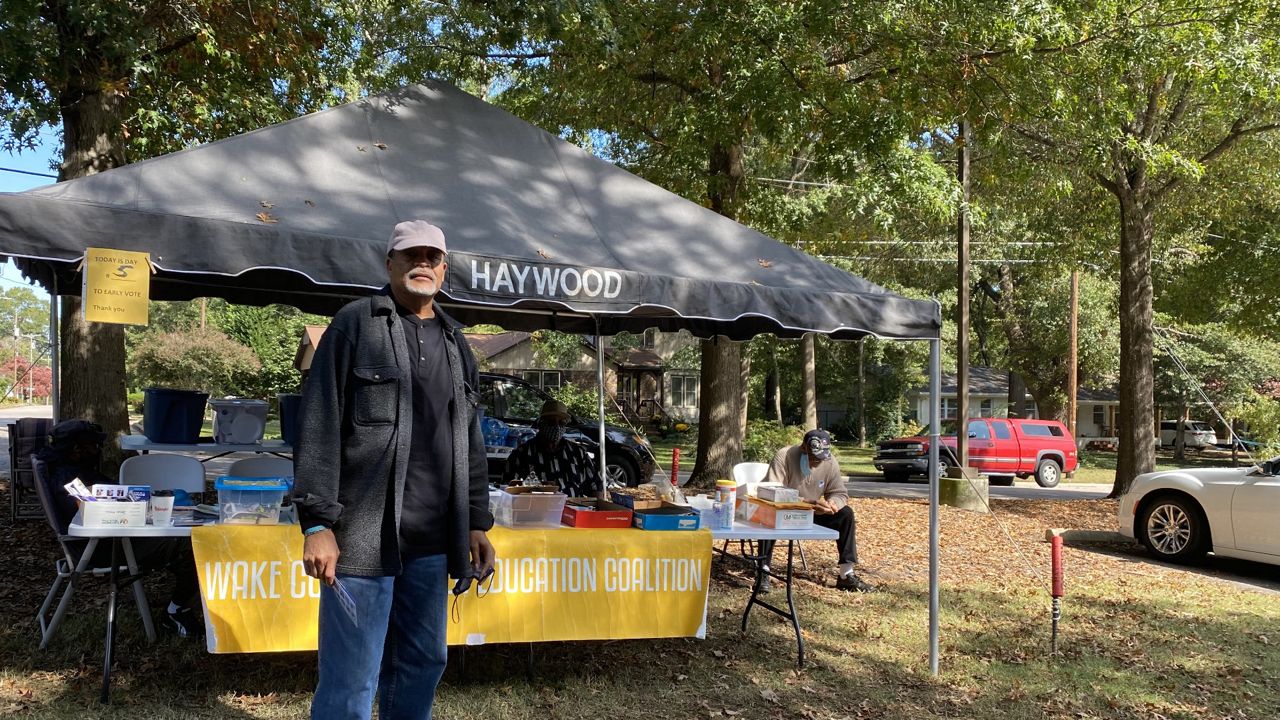 Democratic vice presidential nominee Kamala Harris spoke not far from the park when she visited Raleigh three weeks ago.

North Carolina has been getting a lot of attention from the presidential campaigns. The state has emerged as a battleground between Donald Trump and Joe Biden and it could help swing the election for either candidate.

Trump will be in North Carolina again on Wednesday, his second visit since he recovered from the coronavirus.

Harris also has stops planned in Asheville and Charlotte this week, postponed after staffers tested positive for COVID-19 last week.

Recent polling shows a tight race between Trump and Biden in North Carolina, and campaigns and political action committees are flooding television and radio stations with ads in the 15 days remaining before the election.

Brown said the voters he’s been talking to don’t have questions about who to vote for in the presidential election. The most frequent questions from voters so far have been about Wake County’s housing bond referendum.

“They say, ‘Well I’ve heard about it but I don’t have any details,’” Brown said. The Voter Education Coalition has a table with “Vote Yes for Affordable House” fliers and is handing out a list of endorsements that heavily favors Democratic candidates, all the way from president and senate down to judgeships, county commissions and the Register of Deeds.

Other than long lines, Brown said he has not seen any issues at the early voting site near downtown Raleigh. “People have been very respectful,” he said.

There was one incident in Wake County Friday, the second day of early voting, when a former Republican lawmaker allegedly assaulted a poll worker, according to the county.

Gary Pendleton, 73, said staff at a site in Wake Forest would not let him in to monitor the polls before they officially opened for the day, according to the Associated Press.

“He was on one side, and I said, ‘Well, I’ll just go around you,’” Pendleton told the AP. “So I went around, he jumped over in front of me about 3 feet (away) mouth-to-mouth. I pushed him back because I don’t want to get COVID-19.”

County parties are allowed to have poll monitors at early voting sites, but they are not allowed in before the official opening time, according to county and state officials.

Pendleton was charged with a misdemeanor Friday.