WILKES COUNTY, N.C. — Driving down U.S. 421 through Wilkes County, the stands of the old North Wilkesboro Speedway hulk over the highway.

There hasn’t been a NASCAR race on the track since 1996, but the governor wants to use $10 million from the American Rescue Plan to jump start rebuilding the track.

This part of northwest North Carolina, between Winston-Salem and Boone, is the ancestral home of NASCAR, started by moonshiners who drove fast cars through mountain roads evading police. To this day, locals boast that Wilkes County was known as the “Moonshine Capital of the World.”

Today, grass grows through cracks in the track and some of the buildings are slowly collapsing as vines and trees take back the land.

For decades, tens of thousands of people would gather here for NASCAR races.

“We could hear it. We could hear the thunder of all the motors and everything coming through the valley,” said Wilkes Chamber of Commerce President Linda Cheek, who grew up nearby. “It was kind of exciting. You always knew when the races were coming.”

“There’s a lot and a lot of civic pride in this county for where you’re standing. A lot of it. And it hurts us, you see it to ride by, see the old track falling in,” Wilkes County Commission Chair Eddie Settle said, standing in front of the locked fence that now surrounds the speedway.

Went out to Wilkes County yesterday to talk to some folks about the governor’s proposal to use $10 million in CARES Act money to help rebuild the North Wilkesboro Speedway. They let me out on the track… #ncpol pic.twitter.com/uyy8EVZq6P


Settle remembers going to the track as a boy with his father in the late 1960s and early 1970s.

“We would go to the infield with my dad and he would set up a big scaffold on the back of the truck. We’d be way up in the air, and it was cold, Lord have mercy,” he said. He’d wrap up in a blanket and watch the race.

In recent years, the track has been used to film music videos, documentaries and commercials. Dale Earnhardt Jr. even had the track cleaned up and scanned so it could be included in a racing video game, Settle said.

Twenty-five years after the last NASCAR race on the track, there’s finally some movement to reopen the speedway.

Gov. Roy Cooper wants to use $10 million in federal coronavirus recovery money to jump-start rebuilding the track. The county would have to match the federal funds with $2.5 million of its own, which Settle said the county would be ready to do.

Marcus Lemonis, the CEO of Camping World and host of CNBC’s “The Profit,” said he’d chip in $1 million to get the track back open.

I’m willing to invest up to 1 million into the complex and even have a small @CampingWorld store on property https://t.co/rZrveGcP5O

The track is owned by Speedway Motorsports out of Charlotte, which owns eight active racetracks, including in Charlotte, Atlanta and Las Vegas. Cooper’s American Rescue Plan proposal includes another $10 million for the Charlotte Motor Speedway.

The proposal for what to do with the federal recovery money, which is separate from the annual state budget, also includes $5 million for a “Moonshine Heritage Trail” that would run through Wilkes County and highlight the area’s long history in the moonshine business. That business turned into NASCAR for some drivers.

"A lot of guys learned to drive those cars on those curvy dirt roads," Settle said.

“Motorsports is a significant part of not only North Carolina’s past but also its future to create jobs and grow tourism,” Smith said. “The proposed allocations from the American Rescue Plan can have a significant impact on renovating parts of Charlotte Motor Speedway as well as starting restoration efforts at North Wilkesboro.”

A spokesman for Speedway Motorsports would not give details on any possible plans for the old track. “The facility needs substantial renovation and restoration before hosting events again,” Scott Cooper said in an email. “$10M would be just a start, and additional investment/expenditure would be needed.”

The governor’s budget proposal is just that, a proposal. The North Carolina legislature will come up with its own budget for what to do with $5.7 billion in federal funding from the American Rescue Plan. But Settle said he’s been talking to legislators and feels good that the speedway will get the $10 million.

“The $10 million won’t get the track completely renovated and ready to run again, it certainly puts a dent in that,” said Steve Wilson, a co-founder of Save the Speedway, an organization that has been working on saving the track for more than 15 years.

The history of Wilkes and NASCAR

The first race at the North Wilkesboro Speedway was on May 18, 1947. About 10,000 people came for the race, according to Wilson.

NASCAR was formed the next year after some of the founders met in a Wilkes County hotel to hash out a new race series, Settle said.

Paul Call has been working at the track for decades. He still works there, keeping an eye on the place.

“It was dirt up to ‘57 and then they paved it. They used to run pickups here with no roll bars in them back in the ‘50s,” he said with a laugh.

This was Junior Johnson’s home turf. He had his shop just down the road, and now that stretch of U.S. 421 is named for the legendary moonshiner-turned-NASCAR driver. 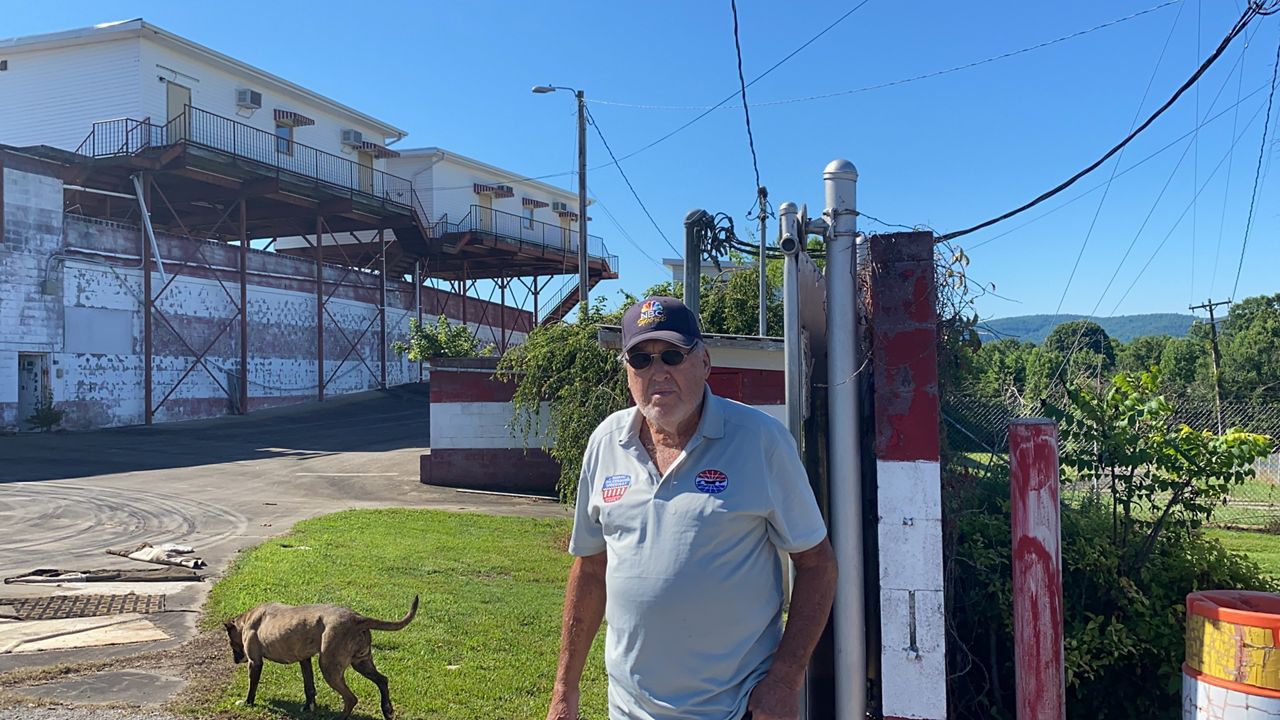 Paul Call saw the first race on the track in 1947 and the last NASCAR race in 1996. (Photo: Charles Duncan)

In 1989, Dale Earnhardt Sr. won the first race on radial tires, which are still used in NASCAR races today. That year also saw Earnhardt Sr. wreck his car at North Wilkesboro, which Wilson said may have cost him the championship in 1989.

In 1991, Wilson said, a mix-up at the speedway helped lead to NASCAR adopting electronic scoring. “A race car picked up the wrong driver during a series of pit stops,” Wilson said, and it took more than a dozen laps for race officials to sort out what to do.

The outcome of that race is still a controversy for some.

Wilkes County was also once the home to Lowe’s. The company was founded there and had its corporate headquarters there. But Lowe’s moved its headquarters to Mooresville in 1996, the same year NASCAR ran its last race at North Wilkesboro.

When the track closed, “It left an economic dent in the county,” Wilson said. The furniture industry and the textile industry also moved overseas, from Wilkes County and much of the rest of North Carolina. “They’ve really taken a hit economically in the last 20-plus years,” he said.

Rebuilding the speedway would put another economic pillar back in Wilkes County.

The biggest employer in the county is Tyson Foods, which employs about 3,000 people at a chicken processing plant there, according to Settle, the county commission chair.

The speedway generated about $30 million each year for this area before NASCAR left, said Linda Cheek, president of the Wilkes Chamber of Commerce.

“It had a domino effect. It affected your hotels, your restaurants, your small businesses, your retail,” she said. “It’s very hard to gain that type of revenue back into a community.”

“Just the opportunity to have it active, have it cleaned up and have it looking good, is huge. It’s absolutely huge for us,” Cheek said.