Wake County Board of Elections staff this week prepared for early voting to begin. North Carolina Republicans hope to win back a supermajority in the midterm elections, and with it the power to override Gov. Roy Cooper's veto. (Spectrum News 1/Charles Duncan)

Can the GOP get a supermajority in the N.C. legislature? It comes down to a handful of seats

Most people’s attention this election season may be on the races for U.S. House and Senate and which party controls Congress for the next two years. But the balance of power in Raleigh is also on the ballot this year.

That balance comes down to a couple of key competitive General Assembly seats around North Carolina.

All 170 seats in the N.C. General Assembly are up for election on Nov. 8. Republicans have strong majorities in both the House and Senate. But they are several seats shy of the 60% supermajority needed in both chambers to override Democratic Gov. Roy Cooper’s veto.

North Carolina Republicans held a supermajority in the legislature for much of the last decade. Regaining the power to override the governor’s veto would give Republican leaders the ability to enact their policy plans without having to worry about whether the governor will sign on.

A veto-proof majority would give the GOP full control over the state budget and allow them to pass legislation like new abortion restrictions.

To get that supermajority, Republicans need to add two seats in the Senate and three in the House. But they also need to hold onto the seats that they have.

Most of the seats in both chambers are not what political watchers would call competitive. They’re in strong Democratic or Republican districts or have well-liked longtime incumbents. 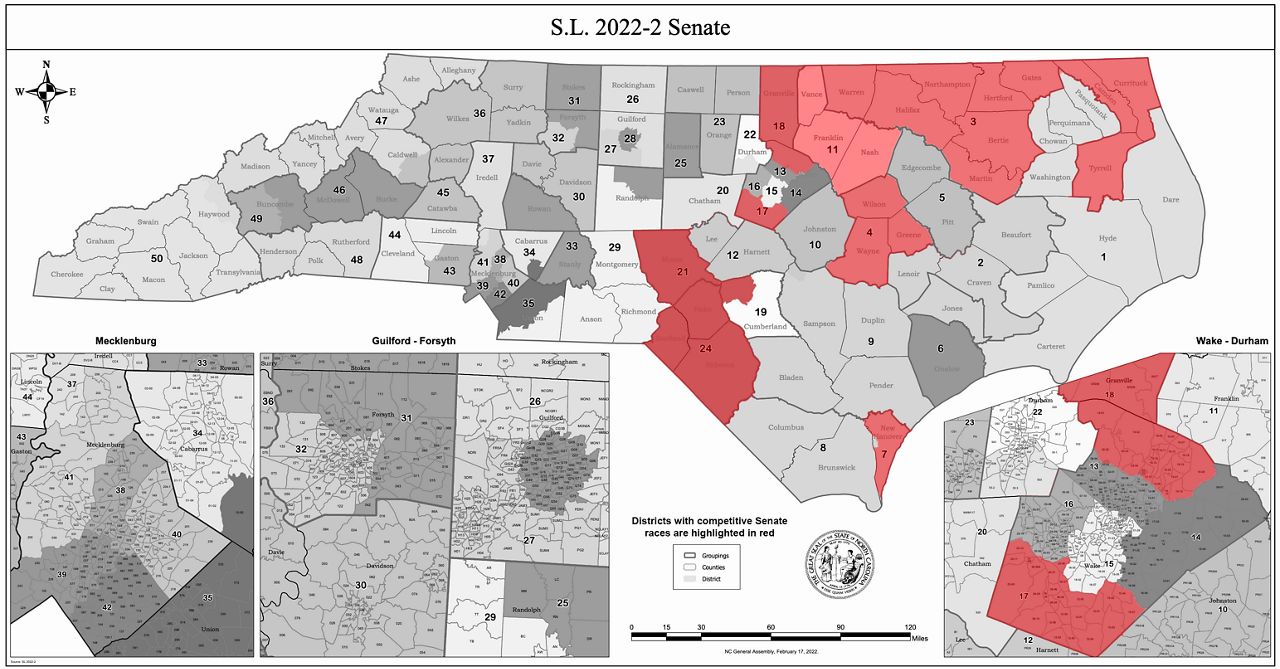 In the N.C. Senate, there are at most eight competitive districts, according to Western Carolina University political scientist Chris Cooper. In the House, that number is more like 20.

The most interesting Senate race for Cooper is in New Hanover County, District 7, where Republican incumbent Michael Lee is up against Democrat Marcia Morgan.

“It is already nasty. New Hanover County is a tough tiger to catch by the tail, it’s a tough place to figure out. Has it swung blue? It’s certainly not red anymore,” Cooper said.

There’s been a lot of people moving into the Wilmington area in recent years, possibly changing the political makeup of the voters there, he said.

District 18, which includes Granville County and northern Wake County, is another one to watch. Democrat Mary Willis Bode is running against Republican E.C. Sykes in an open race. That area, including the northern suburbs of Raleigh, has also seen a lot of in-migration.

“Granville County is one of the swingiest counties in the state,” Cooper said. 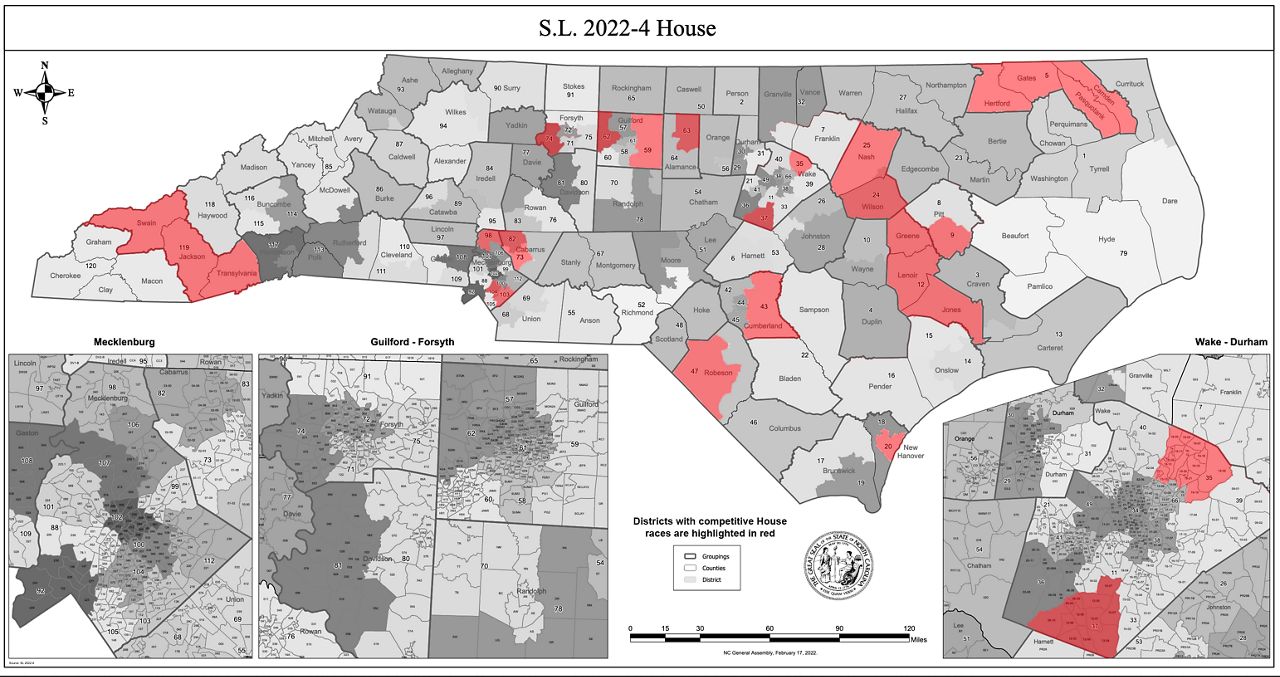 Twenty seats in the N.C. House could be considered competitive in this year's midterm elections, according to data from Western Carolina University political scientist Chris Cooper.

The issues on the ballot in North Carolina are similar to the national debates over abortion, school funding, the economy, crime and gun control.

Democrats are trying to keep the focus on abortion rights. Republican leaders have said they would work to pass more restrictive abortion laws in North Carolina. The governor has said numerous times that he would veto new abortion restrictions, but the GOP could override his veto if they can get a supermajority in the midterms.

Cooper said he hasn’t seen much impact on the Supreme Court’s abortion decision in North Carolina.

“Abortion rights might be threatened in North Carolina, but they haven’t changed,” he said. “That effect may just be a little smaller here than it is in other states.”

North Carolina has not seen the big spike in women registering to vote that other states have experienced, Cooper said.

But voter registration is up ahead of the midterm, according to Duke political scientist Sunshine Hillygus.

“North Carolina is one of the handful of states where there has been an increase in voter registration numbers compared to this point in 2018, which gives some suggestion that we might be on track for the type of turnout rates we saw in 2018,” she said.

For younger voters, Hillygus said, “Voter registration has actually been highest in independent voters and among Republicans as opposed to Democrats, and so in terms of predicting what that impact is going to be is quite a bit more difficult.”

There isn’t much in the way of polling for state legislative races. It can be hard to get good data for such small districts. But pollsters do try to capture the mood of the state as a whole asking generically if people plan to vote for a Republican or a Democrat for state legislature.

“The reality of pre-election polling is that, in state-level polls,” Hillygus said, “the vast majority of those are ones that are using lower methodological standards than what you see in presidential elections — when it’s larger polling organizations who are conducting it. So the sampling methodology is less reliable.”

A recent poll by Public Policy Polling found a tight margin between people planning to vote Democrat or Republican for the General Assembly seats on the ballot.

“Democrats hold a slight 2-point lead on the generic ballot, with 8% of voters undecided. Once again, Republicans lead among men (+4 points) and rural voters (+33 points), but Democrats have widened their lead among women (+6 points) and urban (+36 points) and suburban (+11 points) voters,” according to the poll, done for Carolina Forward, a nonpartisan organization that leans to the left.

The findings are similar to the results of a Civitas poll released late September, which found the gap between people voting for Republicans or Democrats in the legislative races was narrowing.

Only a handful of races for North Carolina’s House and Senate are competitive. Those elections could come down to whether the candidate has a D or an R next to their name and how each voter feels about national politics, rather than the candidates themselves.

“There is so much emphasis in this state and elsewhere about what’s happening in the U.S. Senate, but the reality is, these are races that are going to affect people’s lives much more,” Cooper said.