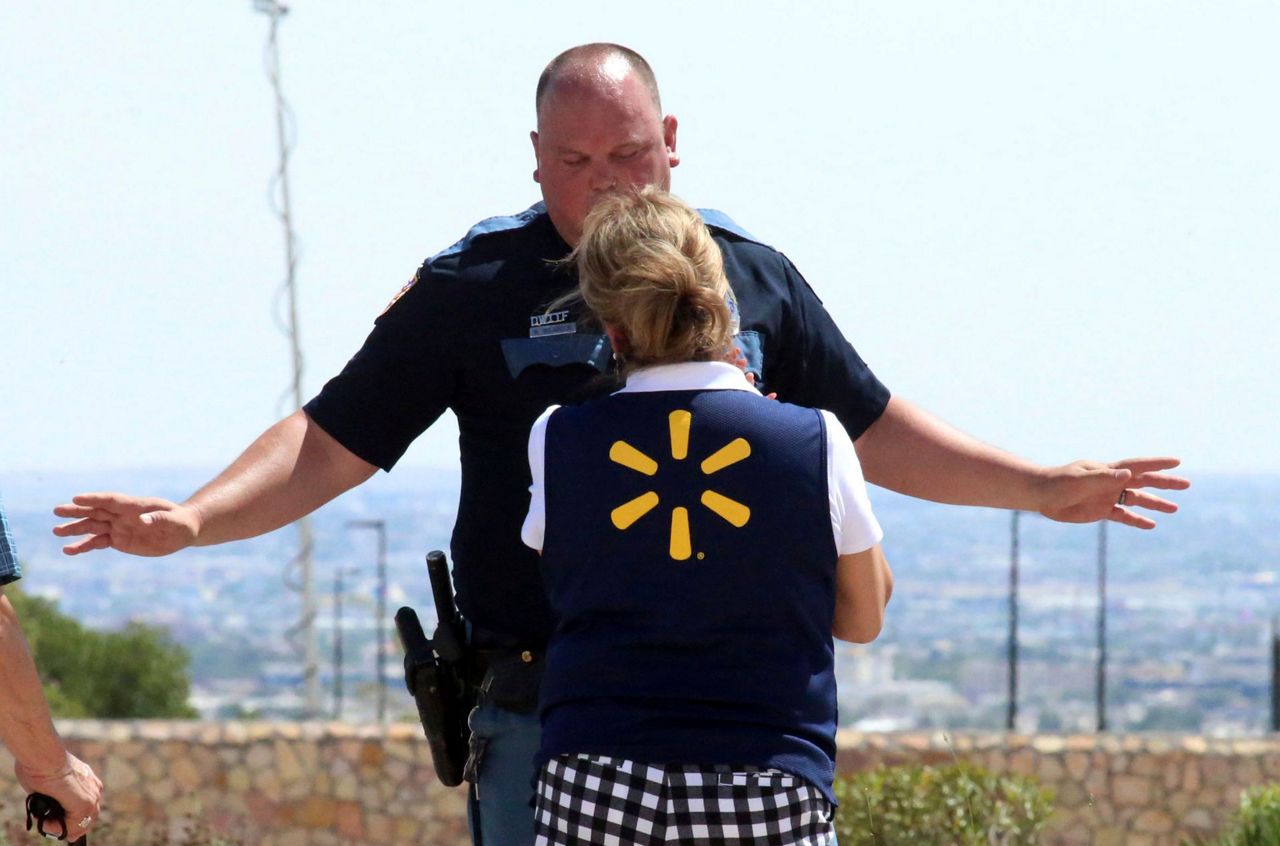 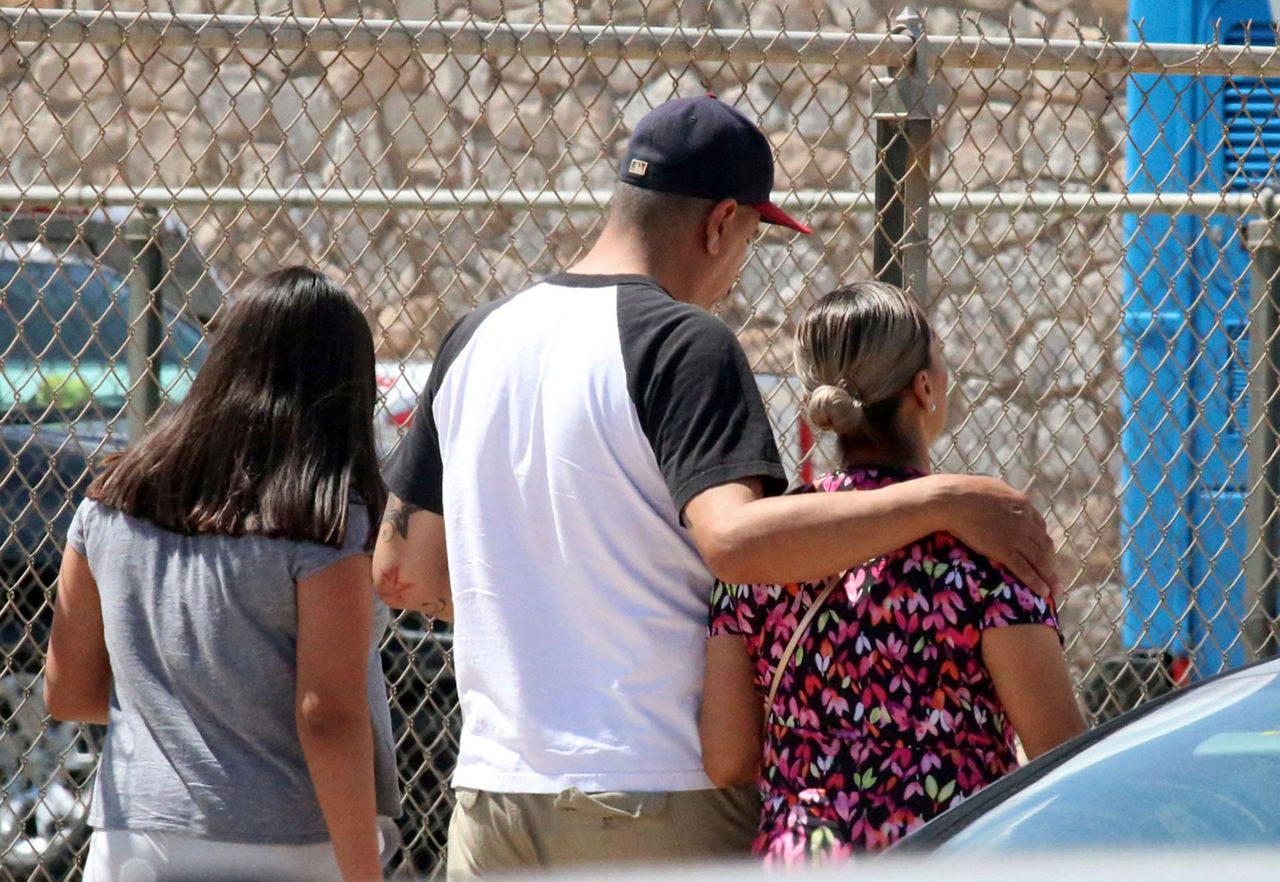 2 of 9
People walk out of an elementary school after family members were asked to reunite following a shooting at a shopping mall in El Paso, Texas, on Saturday, Aug. 3, 2019. Multiple people were killed and one person was in custody after a shooter went on a rampage at a shopping mall, police in the Texas border town of El Paso said. (AP Photo/Rudy Gutierrez) 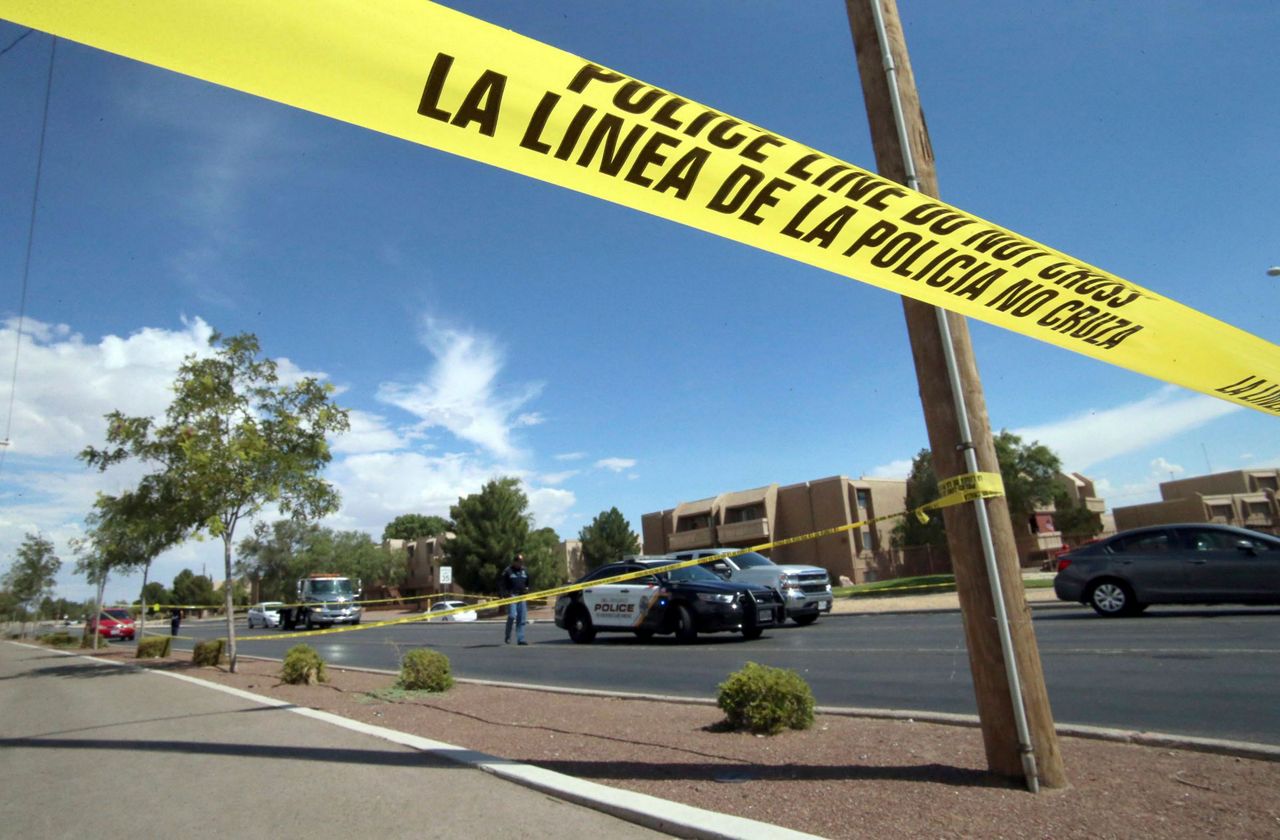 3 of 9
Police tape strung across an intersection behind the scene of a shooting at a shopping mall in El Paso, Texas, on Saturday, Aug. 3, 2019. Multiple people were killed and one person was in custody after a shooter went on a rampage at a shopping mall, police in the Texas border town of El Paso said. (AP Photo/Rudy Gutierrez) 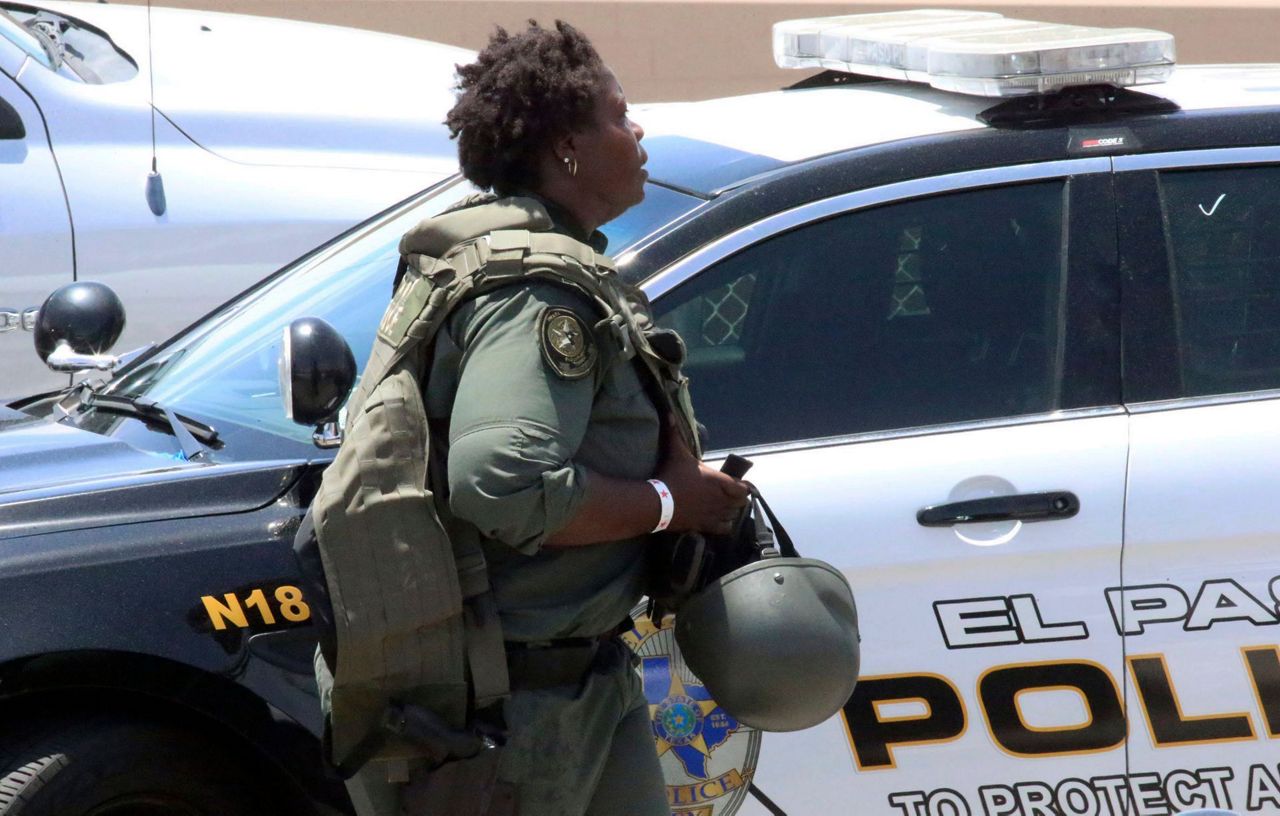 4 of 9
A law enforcement officer walks near the scene of a shooting at a shopping mall in El Paso, Texas, on Saturday, Aug. 3, 2019. Multiple people were killed and one person was in custody after a shooter went on a rampage at a shopping mall, police in the Texas border town of El Paso said. (AP Photo/Rudy Gutierrez) 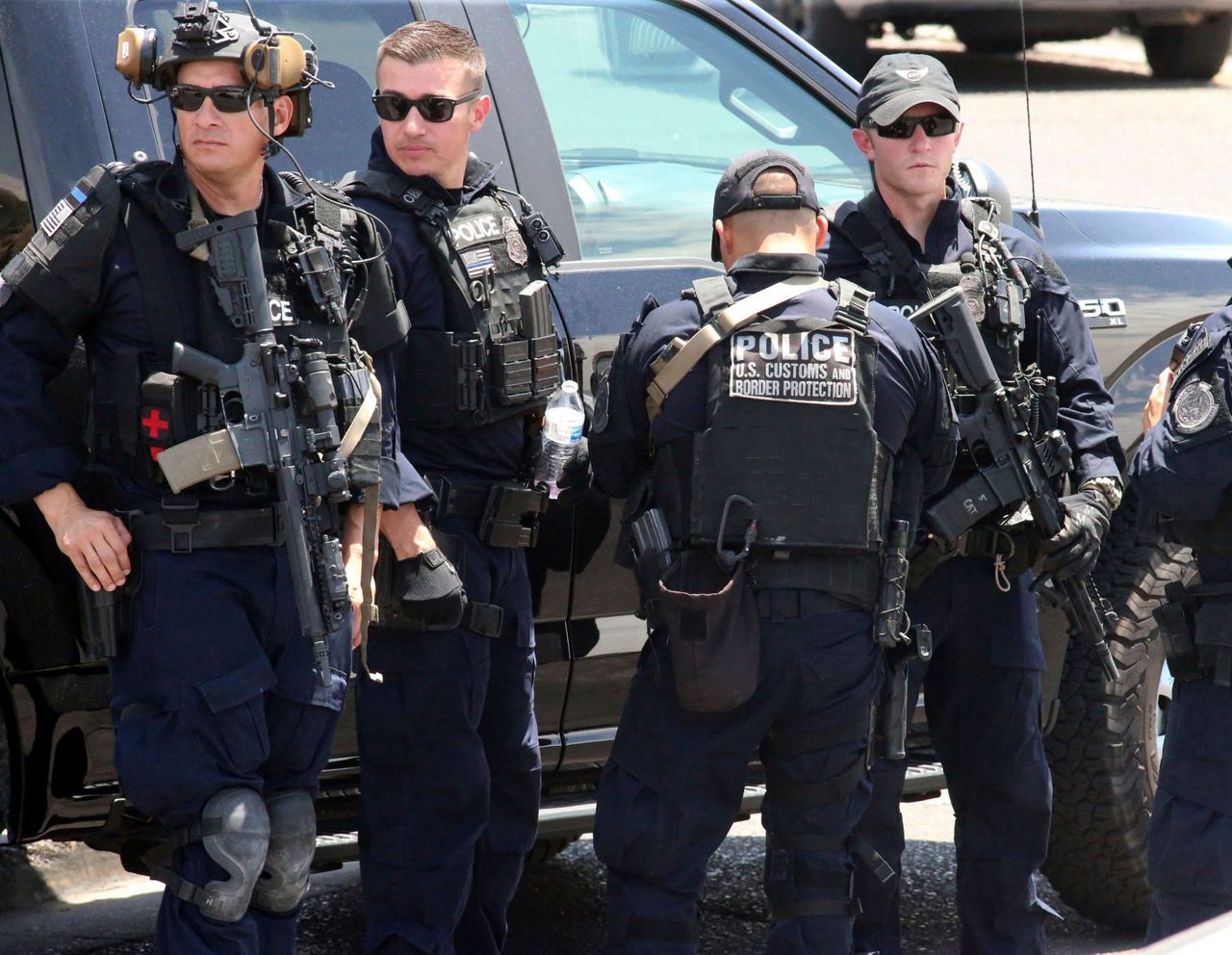 5 of 9
U.S. Customs and Border Protection officers gather near the scene of a shooting at a shopping mall in El Paso, Texas, on Saturday, Aug. 3, 2019. Multiple people were killed and one person was in custody after a shooter went on a rampage at a shopping mall, police in the Texas border town of El Paso said. (AP Photo/Rudy Gutierrez) 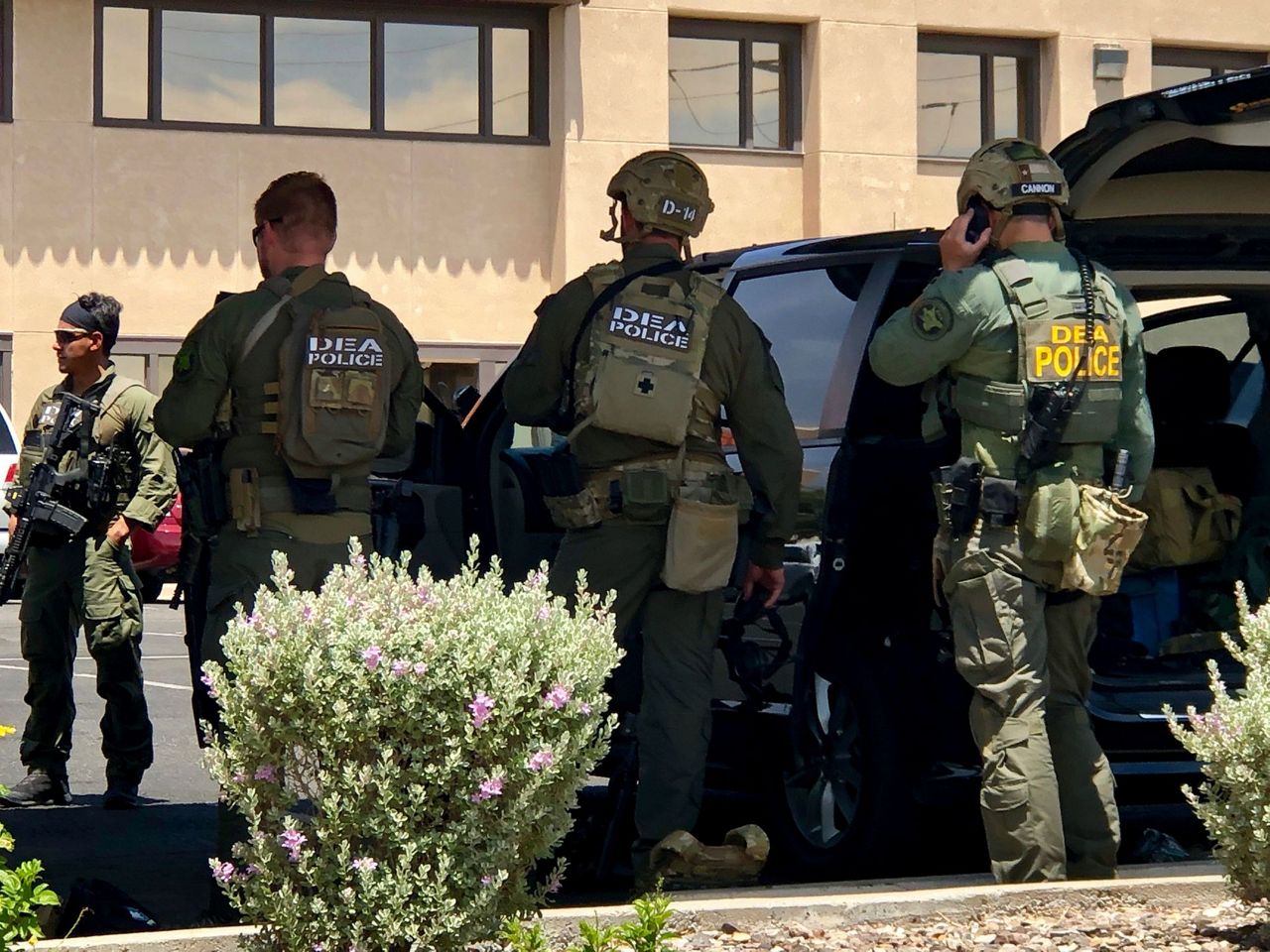 6 of 9
Law enforcement from different agencies work the scene of a shooting at a shopping mall in El Paso, Texas, on Saturday, Aug. 3, 2019. Multiple people were killed and one person was in custody after a shooter went on a rampage at a shopping mall, police in the Texas border town of El Paso said. (AP Photo/Rudy Gutierrez) 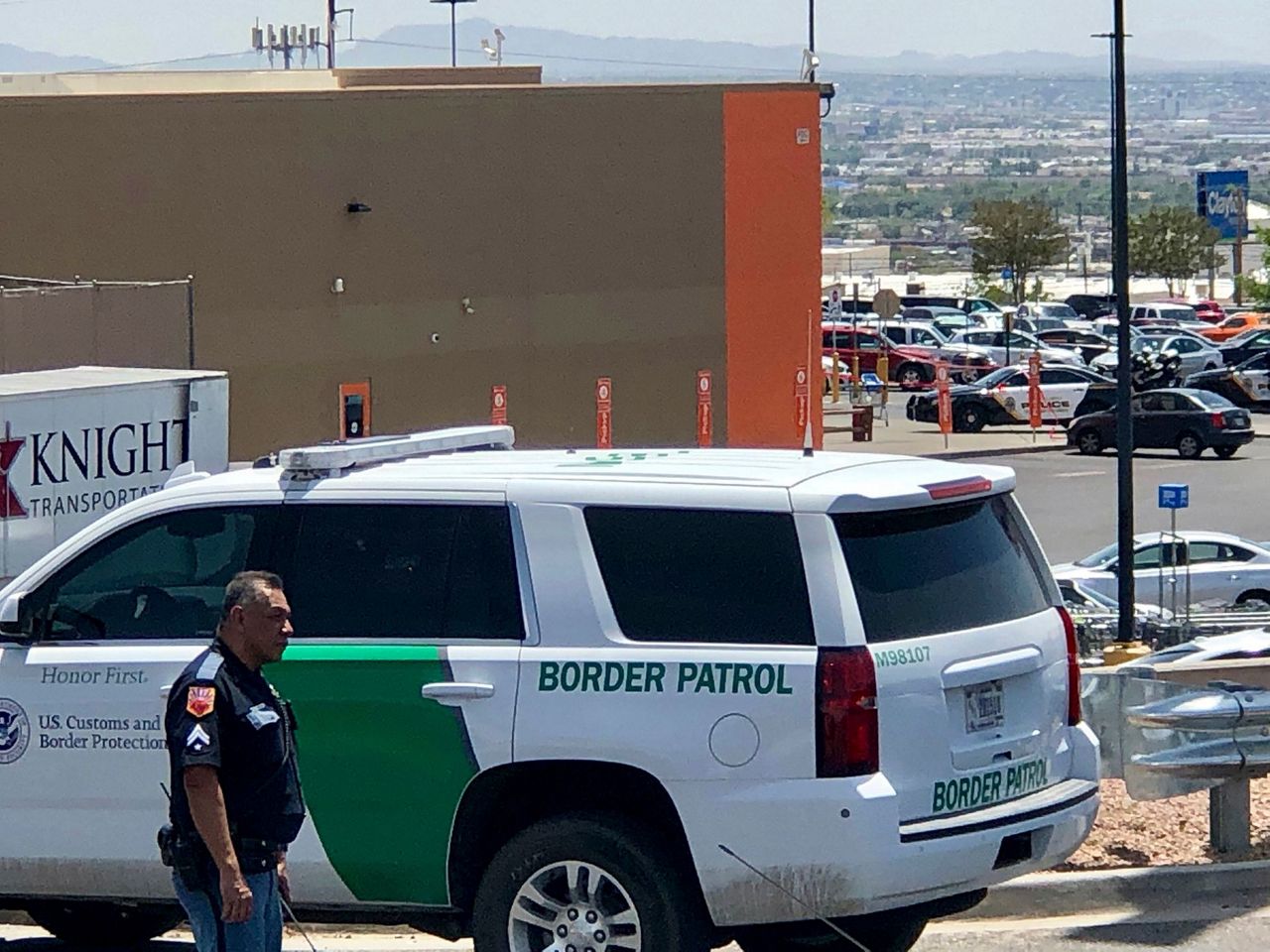 7 of 9
Law enforcement work the scene of a shooting at a shopping mall in El Paso, Texas, on Saturday, Aug. 3, 2019. Multiple people were killed and one person was in custody after a shooter went on a rampage at a shopping mall, police in the Texas border town of El Paso said. (AP Photo/Rudy Gutierrez) 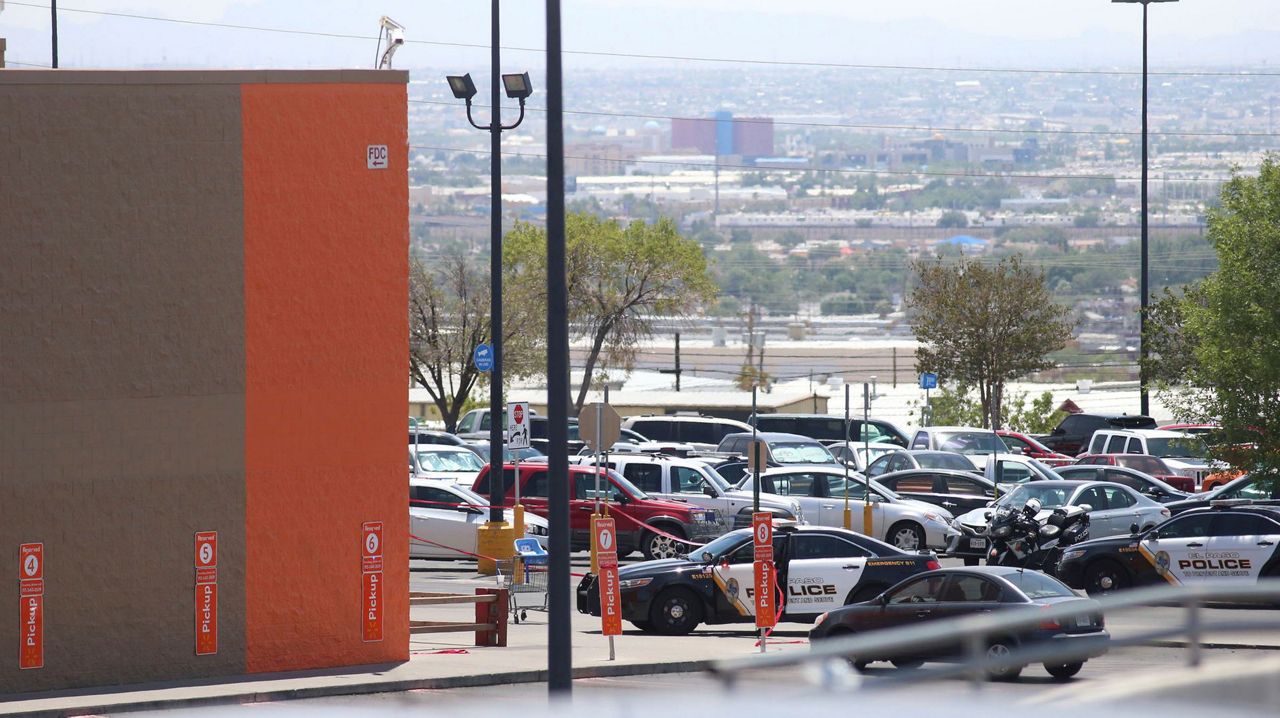 8 of 9
Law enforcement work the scene of a shooting at a shopping mall in El Paso, Texas, on Saturday, Aug. 3, 2019. Multiple people were killed and one person was in custody after a shooter went on a rampage at a shopping mall, police in the Texas border town of El Paso said. (AP Photo/Rudy Gutierrez) 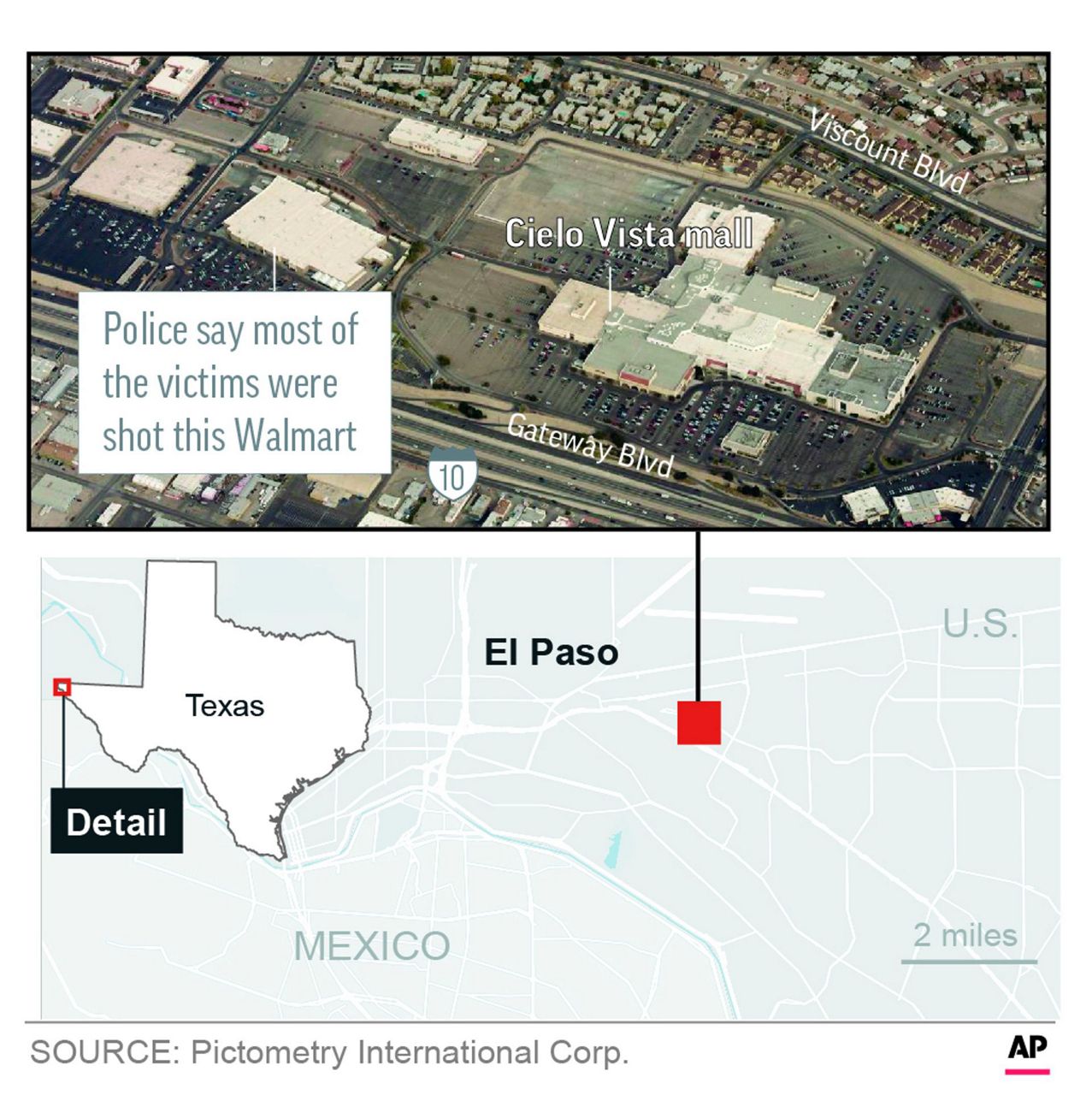 Police warn of an active shooter at an El Paso, Texas, mall

An El Paso native, O'Rourke will address the (hash)ElPasoStrong event at a park Wednesday afternoon, during Trump's visit. O'Rourke is also attending a morning remembrance at a high school and making an evening visit to a makeshift memorial outside the Walmart where a gunman killed 22 people.

In February, during a packed Trump rally in El Paso supporting a U.S.-Mexico border wall, O'Rourke drew thousands with his own counter speech across the street.

Trump tweeted that he had "trounced'' O'Rourke at those dueling February events, adding that O'Rourke should respect victims and law enforcement and "be quiet.''

O'Rourke tweeted: "El Paso will not be quiet and neither will I.''

President Donald Trump's plan to carry a message of national unity and healing to the sites of the most recent mass shootings in America is drawing skepticism from some local residents as well as Democratic candidates.

Trump is expected to visit Dayton, Ohio, on Wednesday morning and El Paso, Texas, in the afternoon to praise first responders and console family members and survivors. A White House spokesman, Hogan Gidley, says Trump also wants to have a conversation about ways to head off such violence in the future.

Critics of the president point to his own divisive language and his anti-immigrant rhetoric that sounds much like that of the El Paso gunman. Some go so far as to say he has helped to create the hatred that made the shootings possible.

Kiana Long shared with me the horror she experienced when the gunman systematically began to slaughter innocent people inside an El Paso Walmart. She & her husband escaped thru the back exit. 22 others did not make it out alive. @SpecNewsSA @SpecNewsATX @NY1 pic.twitter.com/iJKwX1sF9l

Three days after a man opened fire at one of its stores in El Paso, Texas, and left at least 22 dead, the nation's largest retailer is faced with how to make its workers and customers feel safe.

The discounter has long dealt with violent crimes at its stores across the country, but a Walmart spokesman confirmed the El Paso store shooting was the deadliest in the company's history.

Walmart launched computer-based active shooter training in 2015 for all its employees and last month, it started incorporating virtual reality technology.

But most of its efforts are focused on curbing shoplifting. Hargrove said Walmart is reviewing its security protocols.

Our associates in El Paso wanted to express their gratitude for the outpouring of support for their community during this difficult time. We continue to work to aid those in need and our hearts are with the victims and their families. #ElPasoStrong

The death toll stands at 22, with seven victims from Mexico, 13 from the U.S., and two people with an unkown origin.

More than two dozen other people were wounded. Fifteen patients are currently in the hospital including an infant who suffered broken bones. Nine people have already been discharged.

The attack happened hours before a separate mass shooting in Dayton, Ohio, in which nine people were killed and others were wounded.

Speaking from the White House on Monday, President Donald Trump condemned the El Paso mass shooting and another in Dayton, Ohio, hours later in his first public remarks since the attacks.

Just after 1000 another victim passed away. The total is now at 22

On Sunday all bodies were removed from a Walmart store and parking lot more than a day after a mass shooting killed 20 people.

El Paso police Sgt. Robert Gomez said Sunday the shooting was confined to the Walmart and its parking lot, and that the attack did not spread to other nearby shopping areas. More than two dozen people were also injured in Saturday's shooting.

Gomez said the majority of victims were inside the store. The suspected gunman, 21-year-old man from Allen, TX, has been booked on capital murder charges.

A Justice Department official says the federal government is treating the El Paso shooting as a case of domestic terrorism.

The sun is coming up over El Paso this morning as people continue coming to leave flowers and notes at this memorial near the crime scene. People were here at 2:30 this morning when we arrived. They haven’t stopped. @SpecNewsSA pic.twitter.com/rYU7VmsHbY

Hospital officials said another 26 people were injured and being treated.

"This is unprecedented in El Paso," said Gomez, who added that many of the injured had life-threatening injuries.

Police responded in the midmorning to an active shooter scene at the mall, near Interstate 10 on the east side of the city, and were advising people to stay away from the area and to look for missing family members at a school being used as a reunification area.

Ryan Mielke, a spokesman for University Medical Center of El Paso, said 12 people were brought to the hospital with injuries, including one that died. Two of the injured were children who were being transferred to El Paso Children's Hospital, he said. He declined to provide additional details on the victims.

Eleven other victims were being treated at Del Sol Medical Center, according to hospital spokesman Victor Guerrero. He said those victims ages ranged from 35 to 82.

Sunday morning in El Paso. I’m at the EP Medical Examiners Office trying to get information on the victims and the work forensic professionals now are dealing with. Also, I spoke to the father of a Parkland High School shooting victim. More on his tragic story later today. pic.twitter.com/I5pkEE6D26

Texas Gov. Greg Abbott called the shooting "a heinous and senseless act of violence" and said the state had deployed a number of law enforcement officers to the city.

A family of three was among a dozen people waiting outside a bus station. They were trying to return to their car that was in a blocked-off Walmart parking lot.

"I heard the shots but I thought they were hits, like roof construction," said Adriana Quezada, 39, who was in the women's clothing section of Walmart with her two children.

Quezada's 19-year-old daughter and 16-year-old son threw themselves to the ground, then ran out of the Walmart through an emergency exit. She said they were not hurt.

Police said by midafternoon that a suspect was in custody and the public was no longer in danger. Gomez said the suspect, who used a rifle, was arrested without incident. Police believe he was the "sole shooter" but are continuing to investigate reports that others were involved.

Presidential candidate and former Texas congressman Beto O'Rourke appeared a bit shaken as he appeared at a candidate forum Saturday in Las Vegas shortly after news of the shooting in his hometown was reported.

O'Rourke, who said he had called his wife before taking the stage, said the shooting shatters "any illusion that we have that progress is inevitable" on tackling gun violence.

The Democrat said he heard early reports that the shooter might have had a military-style weapon, saying we need to "keep that (expletive) on the battlefield and do not bring it into our communities."

"We have to find some reason for optimism and hope or else we consign ourselves to a future where nearly 40,000 people a year will lose their lives to gun violence and I cannot accept that," O'Rourke said.

El Paso, which has about 680,000 residents, is in West Texas and sits across the border from Juarez, Mexico.

The city has become a focal point of the immigration debate, drawing President Donald Trump in February to argue that walling off the southern border would make the U.S. safer, while city resident and O'Rourke led thousands on a protest march past the barrier of barbed-wire topped fencing and towering metal slats.

O'Rourke stressed that border walls haven't made his hometown safer. The city's murder rate was less than half the national average in 2005, the year before the start of its border fence. Before the wall project started, El Paso had been rated one of the three safest major U.S. cities going back to 1997.