Guns N' Roses, Cardi B, The Cure Among ACL Headliners

AUSTIN, Texas – It’s a big day for Austin City Limits as the lineup has been announced and tickets went on sale at noon on Tuesday.

Among the headliners in 2019 are Guns N' Roses, Mumford & Sons, The Cure, Childish Gambino, Cardi B, and Tame Impala.

Childish Gambino was a headliner in 2018 as well, but cancelled his performance shortly before the festival due to an injury. Other notables include Kacey Musgraves, The Raconteurs, Gary Clark Jr., Lizzo, and Thom Yorke.

While the artists below are set in stone, you never know who might be added. In 2018 two months before the festival, three new artists were added to the lineup. 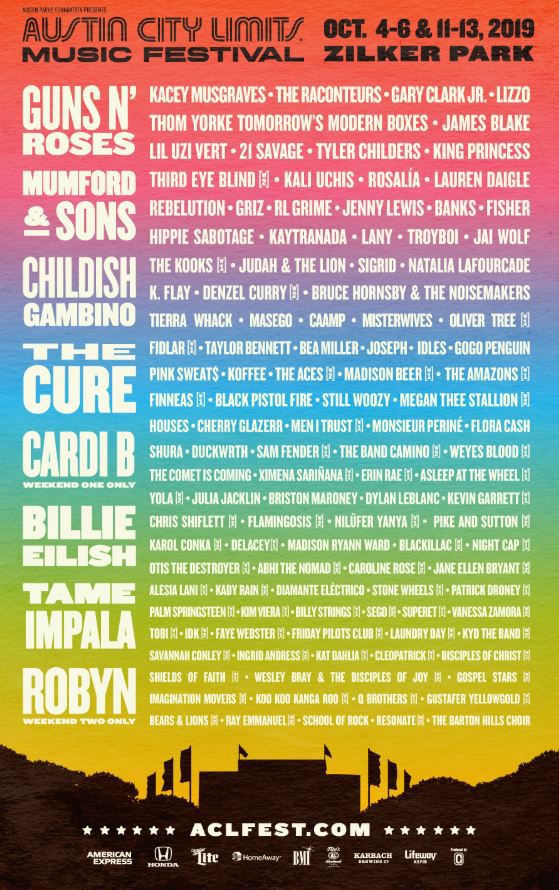 On Monday, ACL tweeted hidden clues to who some of the big names might be. The festival will take place October 4 through October 6 and the following weekend on October 11 through October 13 in Zilker Park.

Other notable bands that are not playing both weekends include:

To attend all three days of either weekend, ticket prices start at $260 for a 3-day General Admission ticket and go up to $3,600 for a 3-day Platinum ticket. Single-day tickets are also available for all pricing tiers, starting at $105 for General Admission and $2,000 for Platinum. Children 10 years old and younger will be admitted free of charge with a ticket-holding adult. There is a limit of two children per ticketed adult.

The festival also offers a layaway plan for purchasing tickets. For more information about the layaway plan, you can contact the official ticket provider, Front Gate Tickets, on their website or call 1-888-512-SHOW.

This year the festival offered a “General Admission+” option that provides festival-goers with shade and seating in a private lounge, with air-conditioned restrooms and complimentary water and soft drinks. The Genral Admission+ option for Weekend 1 sold out within two hours of tickets going on sale and a few hours later it was sold out for Weekend 2.

People can book an Austin vacation rental with VRBO, the official accommodation provider of the festival, for either weekend. ACL Fest also partners with select hotels in Austin that offer festival attendees a discounted rate. Anyone that books their hotel room through the ACL Festival website will receive a discounted rate and each night booked generates a $2 donation to Kids In A New Groove. To view 2019 ACL Fest special hotel rates, visit the ACL Music Fest website.

After the lineup was officially announced, several of the performers took to Twitter to express their excitement to play at the festival:

AUSTIN we're majorly hyped to announce that we're also heading to #ACLFest this October. We had a blast @sxsw and can't wait to be back in town!! https://t.co/nl4QA2Kk7z @aclfestival pic.twitter.com/sl6F7IRtFD

Austin, we're coming for you! We'll be playing at the @ACLfestival this October. Tickets go on sale today at 12pm CST. See you there. https://t.co/bNaDLcCwtM #ACLFest pic.twitter.com/jrpREzEIt1

Austin we're so excited to join you in Zilker Park this October for @aclfestival! Full lineup and ticket info here: https://t.co/UC0GgOiCn4 pic.twitter.com/yUm6KvoW3k