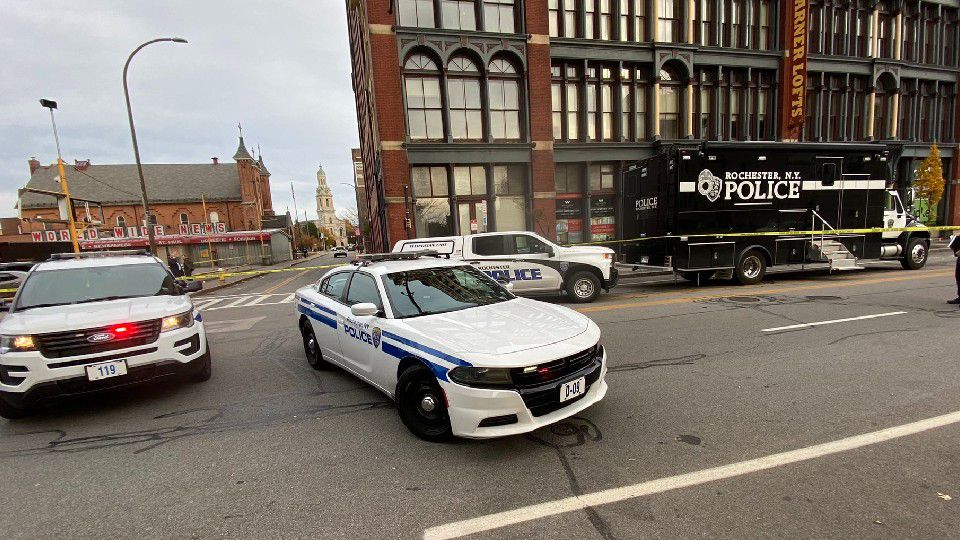 ROCHESTER, N.Y. — Rochester police say the record for the most homicides in one year in the city has been broken following three deadly shootings Thursday.

RPD Capt. Frank Umbrino says the city's 71st homicide of 2021 took place around 1:30 p.m. after a man in his 20s was shot and beaten by two people on St. Paul Street near the Rochester Transit Center. RPD does not yet have any suspects in custody.

Not a record we want to break once, yet twice in one day. At the scene of Rochester’s 71st homicide of the year - more murders than any other year on record. @rochesternypd say a man was beaten & shot near the Rochester Transit Center on St. @SPECNews1ROC pic.twitter.com/q8HWcTsRWL

The 69th and 70th homicides of the year took place early Thursday morning inside an apartment building on Chestnut Street, next to the Cadillac Hotel, according to investigators. Rochester police say one victim was in his late teens and the other was in his early 20s.

Police responded to the building just after 3 a.m. for reports of shots fired. When they arrived, they say they cleared the building and found one victim in the stairwell between the first and second floors. The second victim was found in a hallway on the third floor. Both were pronounced dead at the scene.

Police believe the two victims were friends and one was visiting the other who lived in the apartment building. Right now, there are no suspects in custody.

It has been just two years since Rochester had its lowest homicide rate in a generation. Capt. Umbrino talked about how difficult it is to see more young people being killed in the city and the record of violence being broken.

"We need the community to step up," Umbrino said. "We need to re-examine what we're doing as a community. It's not working. There's a lot of issues and problems within the system we need to correct and we need to fix. At the end of the day, everybody is on the same team. Everybody wants to keep people in the city of Rochester safe. We are not doing a good job at that. When I say 'we,' I don't mean the police department. Certainly, we have a part in it, but I mean everyone within the criminal justice system, all of the leaders of the school district. We're all failing. We need to do better, figure out what the problems are and see what we can do to try to make a difference."

According to the department's data, more people under the age of 18 have been shot this year than in the last decade. Five teens were shot Tuesday night in two separate incidents. Police say they were targeted in drive-by shootings. Those incidents bring the total number of shooting victims under the age of 18 to 60 so far this year. That's compared to 18 teen victims a decade ago.