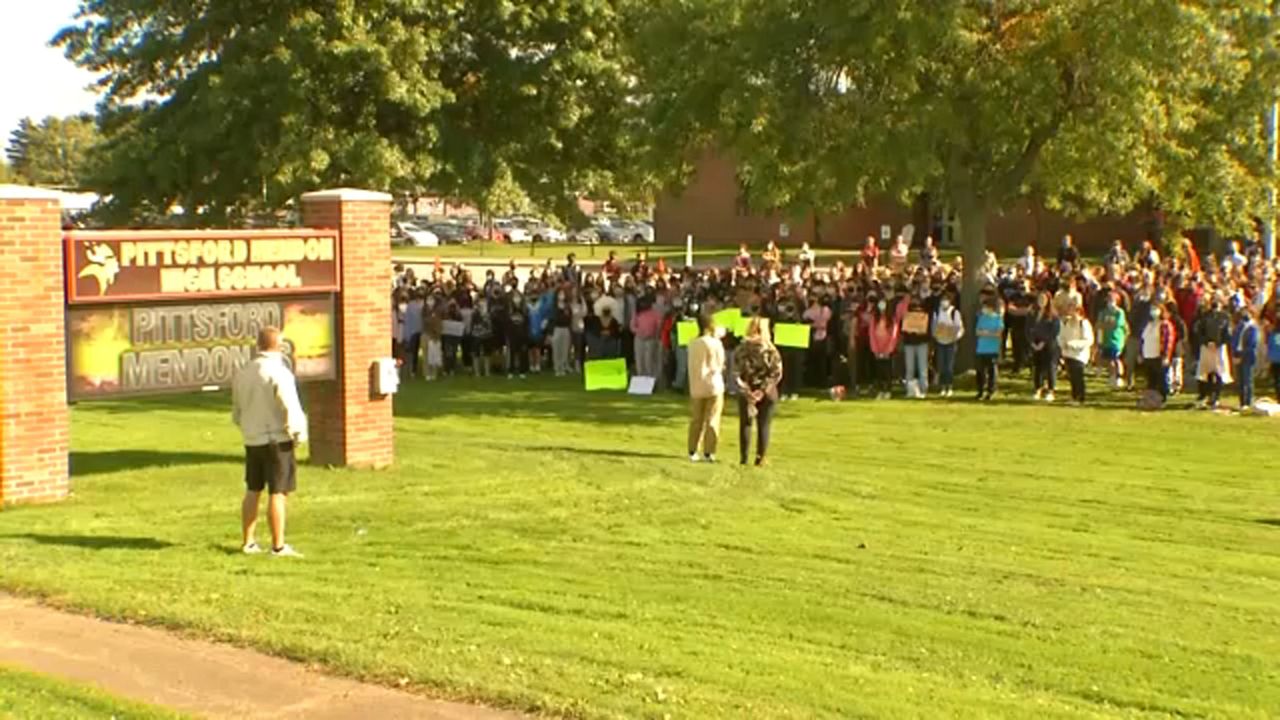 PITTSFORD, N.Y. — The Pittsford Central School District is responding after hundreds of its students staged a walkout at two high schools on Wednesday. They say they are calling for change and for more consequences for incidents of racism.

“We don’t feel heard, in terms of reporting racism, and they’re just too passive about it,” Sutherland senior Jaylen Wims said. “Racism is a serious topic and they need to be aggressive. They need to be on it. People need to feel safe about it. So I feel this walkout today was really a message to the Pittsford district.”

Students have been calling for change, but a video triggered the walkout. The video, which surfaced on social media last Friday, reportedly depicts threatening and racist images and audio from a Pittsford student.

“A student basically threatened people of color’s lives with an airsoft gun on a video and saying the reason he carries a gun is to kill people of color," said Pittsford Sutherland student Serena Norton.

The Monroe County Sheriff’s Office says a weapon, which appears to be an airsoft gun, was displayed in the video, but it does not believe there is an immediate threat to the school. Deputies met with the student and say the family is cooperating with its investigation.

“Typically, we do not talk about student discipline,” Pittsford School District Superintendent Michael Pero said. “I will share that [the student] is not in school.”

Pero says the district’s code of conduct calls for suspension, followed by a hearing to determine the next steps for the student.

The classmates at the walkout want to see change on a broader scale.

“I hope to see sort of fine lines and more of a sense of security, fine lines drawn in the code of conduct and serious penalties for racism,” Wims said. “Things that are clear and concise.”

Pittsford Sutherland Senior Jaylen Wims is among the 300 plus students taking part in the walk out calling for change and more consequences for incidents of racism. Another 300 to 400 students also staged a walk out at Pittsford Mendon HS. @SPECNews1ROC pic.twitter.com/kTtxYlmTXu

“I’m sorry if you’ve experienced any kind of racism in our schools,” Pero said to students at the protest in an impromptu apology. “I pledge 100% to work with each one of you. This came to where we are right now because one of your peers took the time to let me know that this happened. And I spoke with many students last week to say, if anything is going on, you need to know. We love you. We care about you. We want you to be safe. I want to end this and I want to work with you to end this. Today was a big start. That was brave of you.”

“He doesn’t have to apologize to us for racist incidents that students make,” Wims said. “That’s not their fault. Their fault is, we’re not satisfied with how they carry out those actions of disciplining the student.”

The district says it plans to work with the students on this issue.

The sheriff's office and the district say they are taking corrective action with the student and any others who may have been a part of making the video.