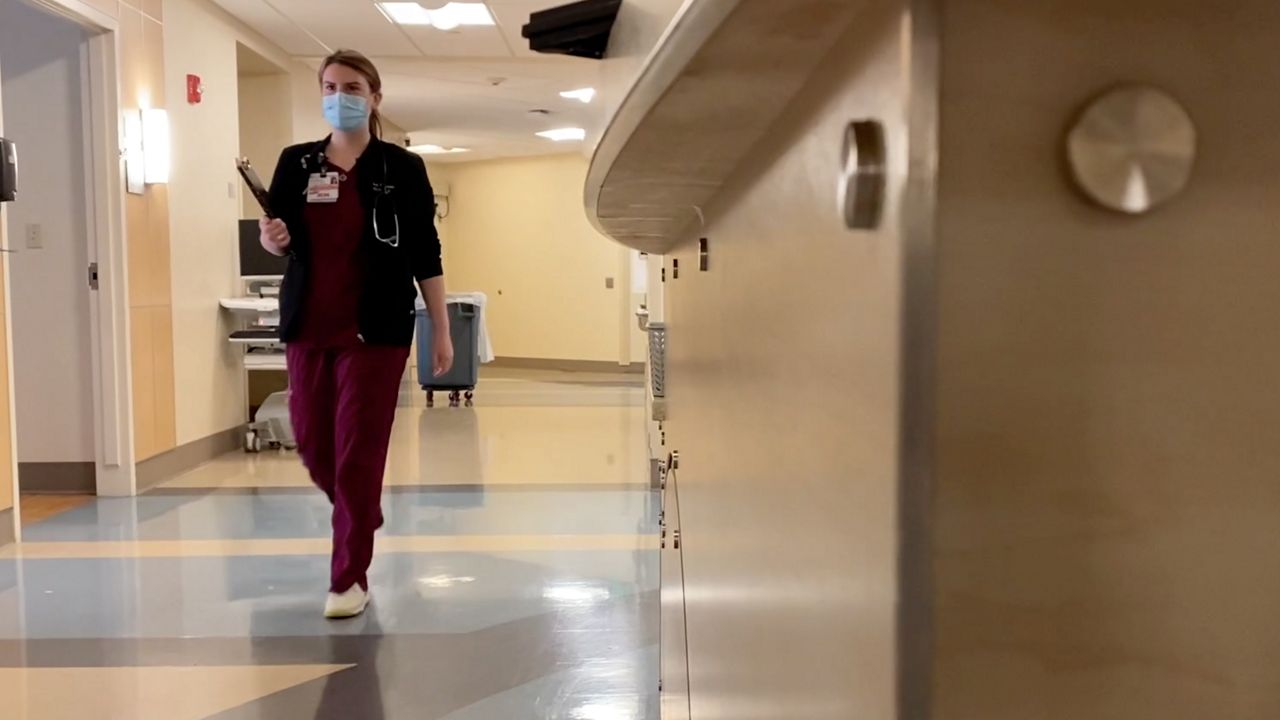 For first-year nurses, the last year has presented several challenges. That includes finishing school remotely, making up clinical hours, and then entering the work force during a pandemic.

Isabel Polmatier faced all those adversities over the last 15 months.

A year ago, she was graduating from nursing school at Binghamton University. But the last semester was unlike anything Polmatier could have imagined.

The pandemic changed a lot and forced just about everything to be remote.

“Losing the hands-on portion and everything behind the screen was the hardest,” Polmatier said.

However, it gave her even more of a purpose to becoming a nurse. While she was finishing school, Polmatier was also contributing to the front line by working as a technician at a local pharmacy. In July, she took her board exam and a month later started her new career as a nurse.

“Putting on my badge for the first time that said ‘RN,’ that was a really special moment, too,” said Polmatier, as she gets her scrubs ready for work.

Today, she works on the fourth floor at St. Peter’s Hospital in Albany, in the cardiac unit. Polmatier usually tackles 12-hour overnight shifts, where she’ll take care of patients and make sure they’re receiving the right medications.

“I think the biggest challenge was jumping right in during a pandemic,” Polmatier said.

She says it was scary at times and the stakes seemed higher, especially when there was a surge of cases during the winter. But Polmatier says there was plenty of PPE available, and soon after, they received the COVID-19 vaccine.

Polmatier said the first few months on the job brought with it a lot of new information.

“[I] went from learning the heart to, then in January, switching gears to a COVID unit learning respiratory, which was a whole different ballgame,” Polmatier said.

And even in a pandemic, she says her colleagues always take time to answer her questions and help her.

Over the last year, there have been a lot of kind gestures from patients, their families and the community, proving Polmatier’s efforts have not gone unnoticed.

“Anything that just can cheer you up, put a smile on your face, seeing a nice rainbow, smell a nice bouquet of flowers, it all makes it worth it,” Polmatier said.

Ultimately, it’s the opportunity to save lives and make a difference that drives her to put on the scrubs. Polmatier says her advice for future nurses would be to take it one day at a time.

“Ask all the questions you want. Everyone is here to support you,” Polmatier said. “You’ll be a great nurse. Everyone learns at their own pace, and we’ll all get there together, and being a team only makes us stronger.”