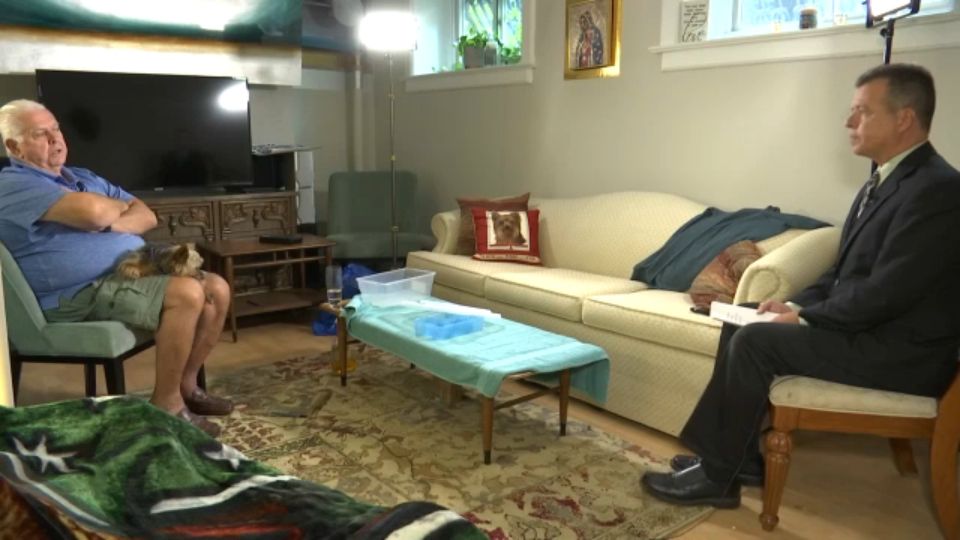 Father Art Smith is one in a long list of priests accused of clergy sexual abuse. It's a list he says he doesn't know why he's on, with accusations he continues to deny.

The things Fr. Smith is said to have done include clergy abuse allegations. He was hit last week with his first lawsuit under the Child Victims Act while at Saint Bernadette in 1976.

He also denies allegations of enticing a male student years ago at Saint Mary of the Lake School in Hamburg by messaging love you, love spelled l-u-v, on Facebook — but instead just offering love and peace to a kid having trouble at home.

"Let me tell you this. I never touched that kid. Never," said Fr. Smith.

Fr. Smith was then suspended from ministry from then-Bishop Edward Kmeic.

"Never once could I sit down and say, ‘Let me tell you my side of the story.’ Never, never," said Fr. Smith.

Smith then spent time in a church-run treatment center for priests in Philadelphia.

"It was like being in Hell," said Fr. Smith.

He was later assigned to Brothers of Mercy nursing home in Clarence, where he was accused of having inappropriate relations with two young men, relations he says was nothing more than a hug after mass.

And then there are the accusations from Fr. Ryszard Biernat, former priest secretary to Bishop Malone, turned whistleblower, who referenced Smith in recent audio recordings.

"I have forgiven him. Long time ago," said Fr. Biernat.

Biernat says in 2003 around Christmas, after a night of drinking with a group of seminarians, he woke up to find Fr. Smith in his bed lying naked behind him.

"I did not welcome that. His skin against my skin. Breathing heavily on my neck, and started kissing it. Starting grabbing my ear with his mouth. And was grabbing my private parts," said Fr. Biernat.

Spectrum News asked him if Fr. Biernat was making it all up.

"Yes, no part of it's true, part of it's not true. I laid down on his bed next to him. I said, ‘I like you more than you'll ever know.’ I was not naked. I was in my underwear. I did give him a little peck on the cheek and I left. There's nothing more to it than that," said Smith.

Spectrum News then asked if he thought how people might think that exchange between him and Fr. Ryzsard might be considered weird.

“Absolutely. Of course. It's one of those things where you know you think about it and you say, ‘Why, why did I ever do that?’" said Smith.

Fr. Smith's nephew, 34 year-old Ryan Cooley, who says his uncle abused him as a child, thinks he should go to jail.

And that Bishop Malone should resign.

"Because he knows. He knows everything. And did nothing," said Cooley.

"I was so angry. I came close to hate. I wanted this man gone," said Fr. Smith.

Fr. Smith says he lived out of his car, a cabin in the Southern Tier, a local hotel and then his apartment.

He's also had a change of heart for the man he wanted gone.

Spectrum News also asked if Fr. Smith, as a child or an adult, was the victim of abuse, perhaps at the hands of his priest.

Spectrum News also got his reaction to some calling him a predator.

"I've never hurt anyone sexually. Ever. Walk in my shoes for a day. See what it's like to be thought of that way," said Fr. Smith.

Those thoughts have led Fr. Smith to consider suicide. But he says the piano, and his dog Joshua, give him reason to live.

"There are days when I don't want to. I wish somebody could help me," said Fr. Smith.

Spectrum News concluded by asking how he survives this crisis.

"There are people around me who have gone through this like I have. And I trust them, believe in them and yeah, I love them. That's how I'll survive,” said Fr. Smith.

As for the lawsuit against him, after the Diocese is served, statements will be taken from both sides in the coming months, putting Fr. Smith face-to-face with his accuser.