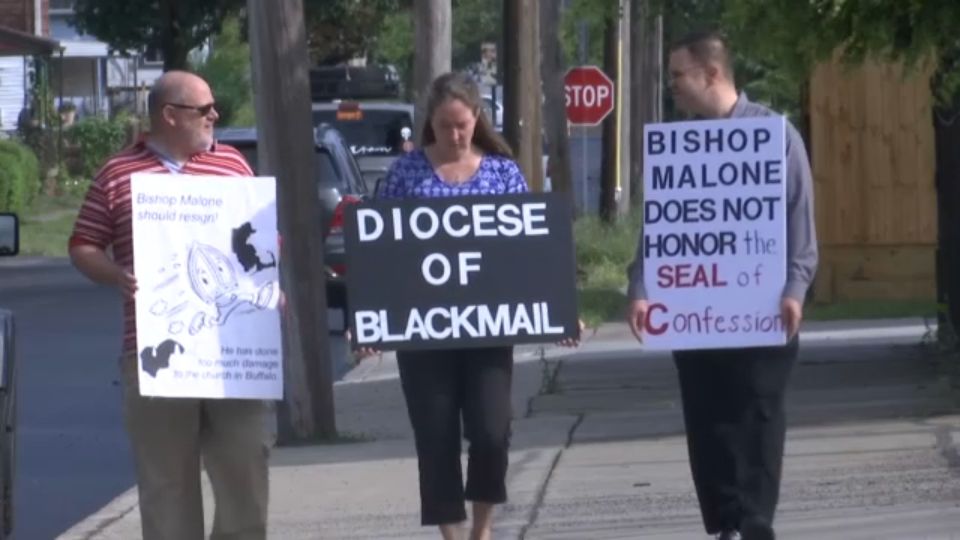 As the Catholic Diocese of Buffalo faces more than 100 lawsuits filed under the Child Victims Act, a former seminarian is now accusing the diocese of blackmail.

The move comes just days after Parisi himself resigned from Christ the King Seminary in East Aurora.

He alleges diocesan leadership threatened seminarians who spoke out or challenged the church.

Specifically he’s referring to a party at Saints Peter and Paul Rectory in Hamburg where they overheard three Hamburg priests making inappropriate comments.

The diocese later suspended all three of those priests, but Parisi said the seminarians were warned not to talk about it or they could face retaliation.

Those seminarians aren't allowed to work and are mostly dependent on the diocese.

“It hasn’t impacted my faith in God, but it definitely has impacted my faith in the institutional church because the bishops can try to hold some priests accountable, but the check and balance system for bishops still needs some serious work,” Parisi said. “You don’t tell on me, I won’t tell on you. And I think that’s how these abuse cases perpetuate. And that’s why bishops around the country, why there is so much in action.”

Parisi is also calling for an investigation of the seminary and its leadership.

He's the latest person to call on Malone to resign; Malone said he intends to stay in his position and lead the church through the crisis.

Also calling for Malone's resignation is  St. Bonaventure University President Dennis DePerro, Rep. Brian Higgins and Lt. Gov. Kathy Hochul, among others. Malone has reiterated several times that he does not intend to leave.

This is the letter Parisi sent to Bishop Malone and other members of the Catholic Diocese of Buffalo:

After much prayer, spiritual direction, and reflection, I am writing this letter to notify you of my immediate withdrawal from the Program of Priestly Formation of the Diocese of Buffalo.

Before coming to Christ the King Seminary, I served this diocese for 24 years as a consecrated religious Brother, caring for the poor, the sick and the dying, including many priests of this diocese, many with very troubled histories. I expected to continue my service to the diocese as a diocesan priest, but I cannot ignore the alarming and problematic governance of the Diocese of Buffalo and Christ the King Seminary. My parents instilled in me a basic sense of faith and morals. I have come to the realization that the values and morals of this seminary and diocese do not correspond to my own.

I realize that my departure may come as a surprise to some, but considering all that the seminarians have endured last semester, including the recent news of the past few weeks concerning a seminarian who was allegedly sexually pursued by his confessor, Father Jeffrey Nowak, I cannot, in conscience, pursue a priestly vocation within this diocese. The manner in which this case has been handled by the diocese, as well as the manner in which so many of the other clerical sexual abuse cases have been handled is disgusting and revolting. I am confident that you understand why I have come to this decision. How could I commit my life to representing a diocese that is suspected of being so corrupt that it is being investigated by the federal government under the R.I.C.O. Act?

To my fellow seminarians, you know that I have tried my best to change some things for the better during my short time at Christ the King. I have tried to improve the seminarian health insurance coverage and I have advocated for improvement in stipends so that seminarians can meet their personal monthly living expenses. As dean of seminarians, I tried to obtain some compassionate understanding from professors regarding the obligation of pre-theology students to submit final assignments for non-credit courses at the end of the extremely difficult and scandalous last semester. In addition, I have tried to improve a sense of pastoral understanding and compassion between professors and seminarian students, especially regarding the rigorous schedule and responsibilities that are placed upon seminarians.

I am sure you will hear stories about a final paper that I submitted for a non-credit pre-theology class. I would like to address this issue myself to prevent any misunderstandings. Before I wrote my paper, a seminarian asked that I proofread his paper. He used the Kindle version of the text and I decided to use the same version. The quotes my classmate used corresponded to the topic I wanted to write about so I used the same quotes, in the same order but used my own thoughts and words to explain the quotes. As you know, my parents have serious health issues and were

hospitalized during the summer and all of us had a very chaotic year and semester, so much so that Father Andrew Lauricella, director of vocations and seminarians, informed Bishop Malone that he was concerned for our physical, emotional and spiritual health because of the hostile and chaotic environment of the seminary. I rushed to complete this paper and unfortunately, I forgot to put the opening summary in my own words. This was my fault, and I accept full responsibility for this error. I do not yet know what my penalty will or would have been.

Before I leave, I would ask each of you to have the courage to continue to advocate for holiness and positive change by demanding accountability from this seminary and diocese. Remember that YOU are the gift to the diocese during this chaotic time! Continue to call for respect for your basic human rights. Do not settle for less! YOU are the future of the Church and this diocese should be eager to invest in its future by treating each of you accordingly!

Seminarians know that Christ the King has a long history of forcing seminarians to repeat courses that a seminarian has already successfully passed for official credit. If you are ever in this situation, please be courageous and speak up. This is fraud and academic abuse. You have a fiduciary responsibility to inform your respective seminarian director and bishop so that your diocese is not paying for you to take a course that you have already successfully received credit for.

All of the seminarians either witnessed or at least heard of the following examples of unacceptable treatment that seminarians have dealt with at Christ the King. I will not name those who committed these offensive behaviors but these examples are certainly not considered Christian or professional behavior, especially in our current Church environment. Demand that formation directors and professors:

I do not know if the seminary or diocese will ever change for the better. Perhaps it will with your holiness and commitment. But I urge you to remember that if inhumane, harassing or illegal behavior continues, you can file Title IX complaints directly with the State without going through the seminary. Considering how the “leak” interrogations were handled after last semester’s pizza party event, please continue to record any and all conversations and meetings with seminary staff and formation directors. NY State law only requires one party to consent to being recorded and you do not need to disclose that you are recording them. And if all else fails, you can contact Charlie Specht from WKBW Channel 7 at this web address https://www.wkbw.com/about-us/contact-us or by calling (716) 845-6100 or by calling Charlie’s

personal cell number (716) 912-6066. Charlie is very sympathetic to what seminarians are going through, especially as his own brother is a Franciscan seminarian. He will keep your name and information in strictest confidence.

Father Andrew Lauricella encouraged many seminarians to reach out to Charlie Specht in the past, and I would encourage you to do this also. Father Andrew also strongly encouraged us to contact law enforcement if we should be subject to or witness clerical abuse while on summer or pastoral assignments. I know of at least one other seminarian who has personally reached out to the F.B.I. after last semester’s scandals.

I close by thanking Bishop Malone and the formation team for my time at Christ the King. The most valuable lessons I have learned at the seminary have not included how to properly write a paper, or even how to nurture a personal prayer life. By observing the behavior of most (not all) priests on the formation staff, I have learned how not to treat people.

If there is any doubt regarding the veracity of the examples cited above, documentation, witness testimony and other forms of evidence have been retained.

Bishop Malone, for the love of God and for the sake of the faithful of the Diocese of Buffalo, please step down!

Seminarian of the Diocese of Buffalo

Kathy Spangler, director for the Office of Communications in the Diocese of Buffalo sent this statement on Sunday in response to the events:

Earlier today, while many Catholics were attending Sunday Mass, three individuals chose to gather in front of St. Stanislaus Church and Bishop Malone’s residence. These individuals were within their rights, and displayed various poster signs. The Diocese of Buffalo, has responded to these topics previously and it is unfortunate that some have not received or understood the responses. It is necessary that the truth, even if not accepted by some, be shared again:

Bishop Malone has never allowed any priest with a credible allegation of abusing a minor to remain in ministry. He has stated it is his responsibility to lead the Diocese of Buffalo and he will continue to do so by continuing to offer opportunities to bring healing to victim-survivors of abuse and renewed trust to the people of the Diocese.

In addition, there has never been an accusation that Bishop Malone violated the seal of the confessional. Mr. Parisi and others make the outrageous and unsupported claim that Bishop Malone has not honored the seal and ignored a complaint that Fr. Jeffrey Nowak violated the seal of the confessional. Bishop Malone has never ignored this complaint. To the contrary, Bishop Malone has initiated an investigation of the complaint. When the individual who made the complaint was first questioned, his response was vague and needed follow up. Fr. Nowak has been removed from ministry while the investigation continues. The Office of Professional Responsibility has tried to contact the individual making this complaint but he has yet to respond. The Diocese will continue to pursue this claim and take additional action if necessary.

Finally, in reference to Mr. Parisi’s recent interview statements regarding seminarian personal finances, students accepted in the Program of Priestly Formation (PPF) for the Diocese of Buffalo sign promissory notes for 0 (zero) percent interest  loans for tuition, room and board expenses.  Upon ordination to the priesthood, these loans are forgiven.  For those without medical insurance, a policy for students is provided.  Men discerning the call to enter the PPF are informed of  these provisions.  Some candidates have chosen to delay their entry into the program so they can be adequately prepared for their time of discernment and study.  Seminarians who graduate from Christ the King Seminary graduate with a Master’s Degree and, like their counterparts in the secular world, it is not unimaginable that they will incur student debt which focusing on their studies.  The Diocese of Buffalo and Christ the King Seminary has assisted seminarians with emergency funding when possible.