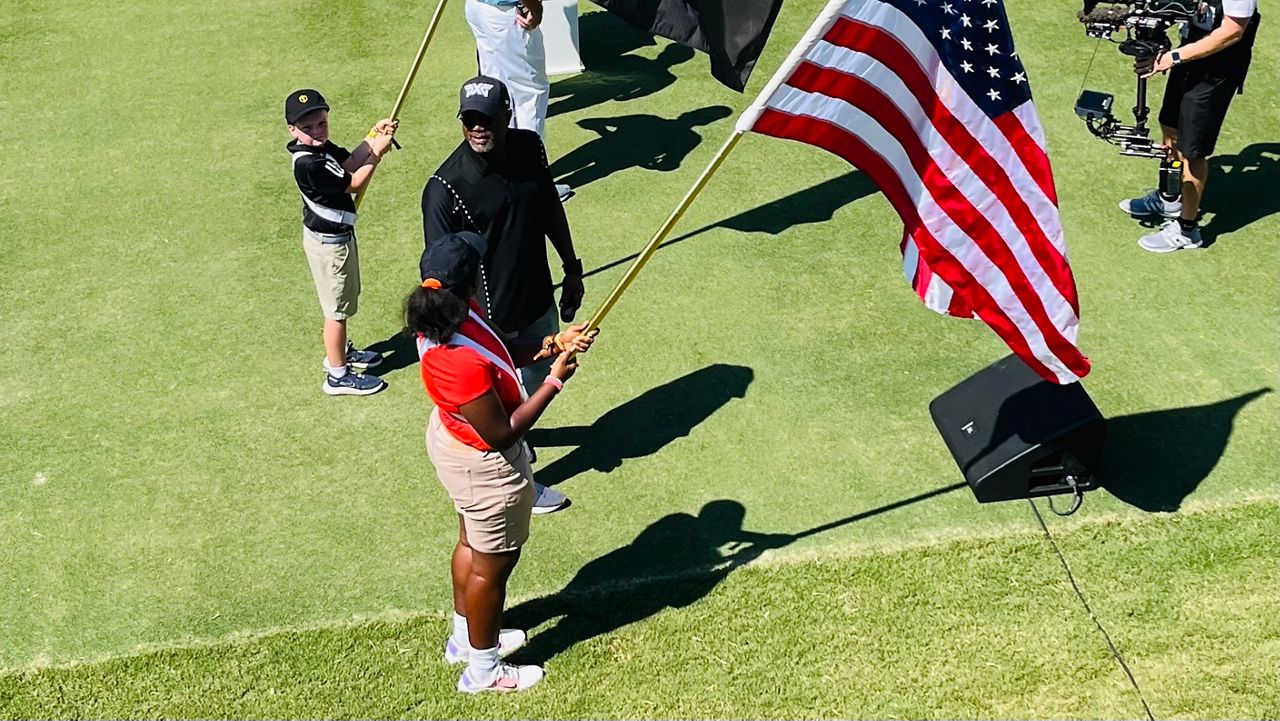 CHARLOTTE, N.C. — Two young North Carolina golfers got the experience of a lifetime at the Presidents Cup this week at Charlotte’s Quail Hollow Club.

Fifteen-year-old Kaliyah Watson, and 8-year-old Harvey Waters, were the official flag bearers for Team USA and the International Team respectively.

The two young VIPs were busy Thursday, meeting the sport’s biggest names and a few celebrities along the way.

The two are participants in the First Tee organization, which introduces young people to the game of golf

“Before we started, I met the owner of the Quail Hollow Club, and then when we were in there I met Mr. Niklaus, Jack Nicklaus, and Webb Simpson,” Watson said about her experience at Quail Hollow.

“I got to meet the captain of the International Team and also Darius Rucker,” added Waters.

As eager golf fans settled in for four days of competition at the 2022 Presidents Cup, the two were busy with their own responsibilities.

“[Thursday] I get to hold the American flag for the opening ceremony,” Watson said proudly.

Waters, who moved to the United States with his family a few years ago, took the International Team flag into the first tee opening ceremony.

The two kids were selected from golfers in the First Tee of Greater Charlotte program, which introduces local school children to the game of golf.

“I’m feeling really, really proud of myself. I’m meeting a lot of people. And I feel it’s just going to be really good for me,” Waters said before the opening ceremony.

Both kids took up the game of golf in recent years. Watson said she picked up the sport by chance two years ago, after a classmate missed an opportunity.

“One of my friends wanted to try out for the middle school golf team, and he never showed up, and I showed up instead of his place. So, I was like, ‘I can’t leave now.’ So, I just was like, we’re going to do this. We went to the pawnshop the next day, bought a 56-degree wedge, and a putter and a 9-iron, and I still have those clubs to this day,” Watson said.

With eyes from all over the world on Charlotte for the start of the tournament, Watson said she only got nervous the last few seconds before they walked out with the flags. Otherwise, the teen said it was cool to meet some of the game’s biggest names.

But, with her official duties behind her, Watson is most looking forward to getting back to regular teenage life.

Across the Quail Hollow links, Waters was enjoying his day with his family and got to take in some professional golf. Waters said he enjoys golf because it is a challenge and is a game about how you play, not winning.

Besides, after opening a major international tournament he said he has no other choice but to keep playing.

“It means a lot, if you told me two years ago that I’d be out here, Quail Hollow, the Presidents Cup, holding the flag, then I’d just be like — you’re crazy, I don’t even play golf,” laughed Watson.