CHARLOTTE, N.C. (AP) — Georgia Tech coach Josh Pastner is still savoring his program’s Atlantic Coast Conference Tournament championship even as he excitedly looks ahead to no longer playing games in empty arenas due to the COVID-19 pandemic.

And yet, this will be anything but a normal season for the tradition-rich basketball league.

It’s the first in nearly two decades that Hall of Famer Roy Williams won’t be coaching North Carolina. It’s the final run for fellow Hall of Famer Mike Krzyzewski in a 42-season career at Duke, while other veteran coaches are closing in on their own eventual finales. Rosters across the conference have transformed amid the upheaval of the new easier-to-transfer world.

It all comes as the league tries to restore some its luster after a disappointing showing in the NCAA Tournament.

The league is changing, or evolving as Virginia coach Tony Bennett puts it. It’s just unclear exactly how different things will look by the end of the upcoming season.

“I just don’t know,” Bennett said Tuesday at the league’s preseason media day. “It’s getting harder as we talked about to establish dynasties, dominant — maybe even conferences because of transfers now and early departures. So that makes it challenging.

The Tar Heels are coming off two bumpy seasons that wore on Williams, first a 14-19 season in 2020 and an 18-11 season last year. Now it’s up to Davis to get things back on a steadily upward trajectory.

Over at rival Duke, Krzyzewski announced in June that he would retire after this season and hand off to associate head coach and former Blue Devils player Jon Scheyer. Krzyzewski is the winningest coach in Division I basketball with 1,170 victories and five NCAA titles.

The Blue Devils are coming off their own un-Duke-like year: a 13-11 season that included withdrawing from the ACC Tournament due to COVID-19 issues before missing the NCAAs for the first time since 1995.

“It is a power shift,” Notre Dame coach Mike Brey said of the two retirements, “and the rest of us are not complaining at all.”

Decisions by Williams and Krzyzewski have turned attention to another Hall of Famer in Syracuse’s Jim Boeheim, who is starting his 46th season with the Orange and turns 77 in November. But Boeheim, who won the 2003 NCAA championship when Syracuse was in the Big East, isn’t saying when he might call it a career.

“I’ve been coaching for a while and I’ve seen 10 Hall of Fame coaches that I know very well retire,” Boeheim said. “The other eight didn’t affect me and these two won’t either.”

Beyond Boeheim are coaching veterans in 73-year-old Leonard Hamilton, entering his 20th year at Florida State; 72-year-old Jim Larranaga in his 11th year at Miami; and the 62-year-old Brey in his 22nd season with the Fighting Irish. 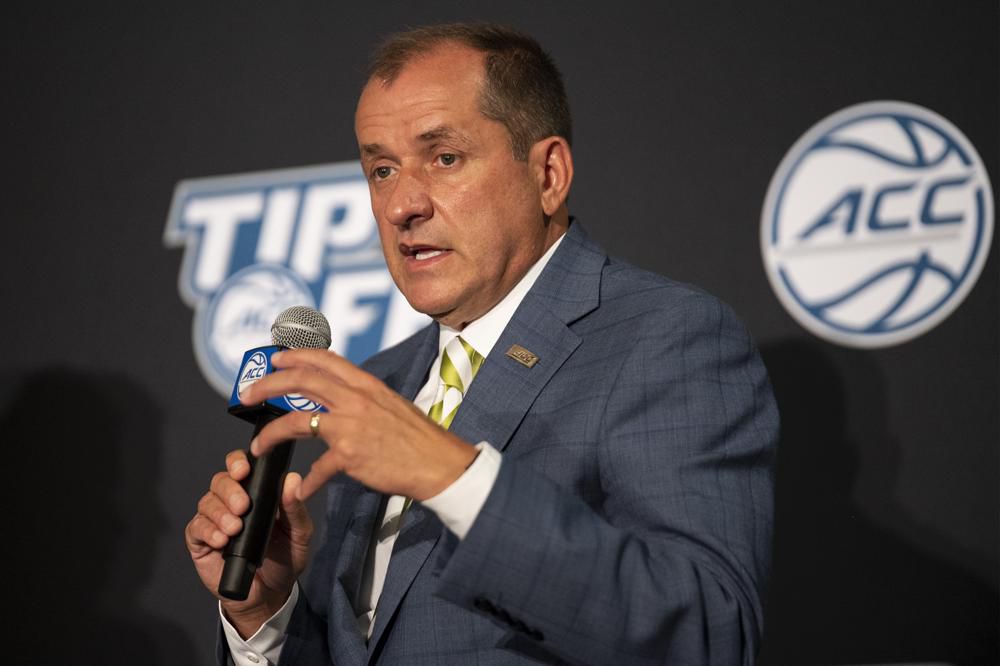 “We’re going through one of those transitional periods,” ACC Commissioner Jim Phillips said in an interview with The Associated Press. “But you welcome in new coaches all the time. And then it’s not either/or. It’s not just Hall of Fame coaches and then coaches that are just beginning their careers. You have another stable right behind them.”

For this year, anyway, the pressing issue is to get back to winning in the postseason.

The league was coming off a terrific five-year run leading into the COVID-19 pandemic, with Duke (2015), UNC (2017) and Virginia (2019) winning national titles. The successes went beyond just those top teams, too; the league had a league-record nine bids in both 2017 and 2018, close to its public goal of becoming a 10-bid league when the ACC added Pittsburgh, Syracuse and Notre Dame in 2013.

But after the pandemic canceled the 2020 tournament, the ACC flopped in 2021.

Five of the seven teams who made the Indiana-bubbled tournament didn’t win a game, with FSU and Syracuse making the deepest runs to the Sweet 16. And the ACC’s 4-7 record was its first losing mark in the NCAAs since 1987.

Answers are coming on whether that was just one bad year or the start of a tougher battle for the ACC to maintain its perch.

“I think that’s whatever you want to take it,” Duke senior forward Joey Baker said. “You can say the conference is down or you could say it was a weird year because of COVID. I guess we’ll find out this year.”