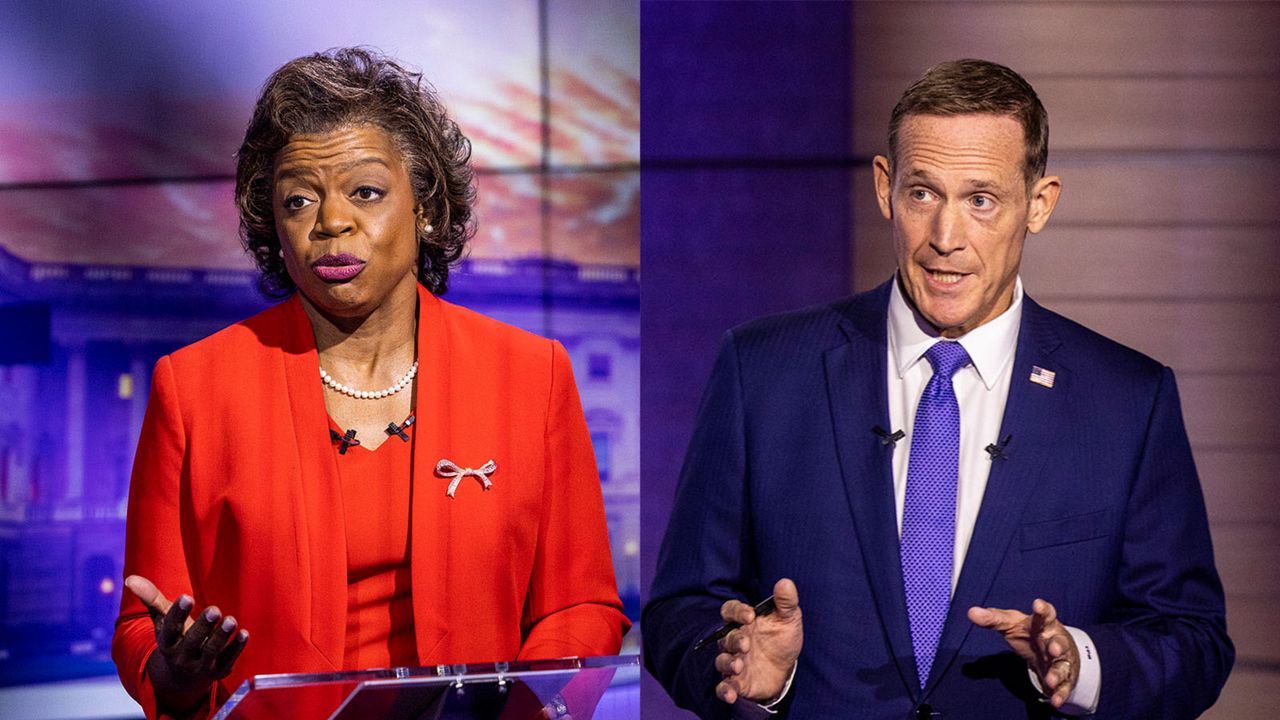 Hosted by Spectrum News 1, Friday’s debate is the only time the two candidates were scheduled to meet before the Nov. 8 election.

Neither candidate participated in a debate during the primary, with the Democratic Party rallying behind Beasley. Budd declined to participate in Republican primary debates.

Beasley is a former chief justice of the North Carolina Supreme Court. Budd is a congressman and had an early endorsement from former President Donald Trump.

The balance of power in the Senate hinges on the election in North Carolina and a handful of other states. Polling shows Beasley and Budd in a tight race to replace retiring Sen. Richard Burr.

The hourlong debate hit on the top issues for North Carolina and the country, including immigration, abortion, inflation, health care and the war in Ukraine. Here is some of what the candidates said Friday night:

Both candidates agreed that inflation is a big problem facing the people of North Carolina, but disagree on the causes.

“People shouldn’t have to decide between buying groceries and school supplies and high-priced medication,” Beasley said. She said Budd had voted against lowering gas prices and the cost of prescription drugs.

Beasley said corporations were making record profits off rising prices and should be reined in.

“Joe Biden went way too far with the American Rescue Plan,” Budd said. “Unnecessary spending from Biden is what’s tipped us over the edge.”

“We need to encourage work,” Budd said. He also said over-regulation was making it hard for small businesses.

The two candidates present a clear difference of opinion on abortion.

Budd has signed onto a bill in the House of Representatives that would ban abortion after 15 weeks of pregnancy nationwide. But he also said he supported giving states the right to decide their own rules on abortion.

“The fundamental question is, who makes the decision for a woman and her family,” Beasley said. “I support the Roe v. Wade framework, which allows for protection and restrictions.”

Beasley attacked Budd, saying the congressman wanted to ban all abortions. Budd did not specify how far he thinks abortion restrictions should go.

Budd and Beasley agree that immigration is a major issue facing the country, but disagree on what should be done about it.

“Washington has dropped the ball on immigration,” Beasley said. “We must secure our border and reform the system.”

She said that means first securing the border, but also creating a path to citizenship for Dreamers, young people who were brought to the United States by their parents, and for people who serve in the military.

Budd accused the Biden administration of not supporting agents with Customs and Border Protection. He attacked the administration’s plan to add tens of thousands of IRS agents, arguing that money should instead be spent on more Border Patrol agents.

He also said the country should complete the border wall begun under former President Donald Trump.

Budd said he’s been to the border and saw “idle construction equipment just sitting there since Biden was elected.”

“I am in support of a wall. It is not the whole solution, but it is part of the solution,” Budd said.

On health care, the candidates again showed how their views diverge.

Budd said he opposed a “Bernie Sanders plan” expanding Medicare to all, saying expanding the program would “destroy a workable system.”

“Economically, it would be unsustainable,” he said.

Beasley said she supported expanding the Affordable Care Act, also known as Obamacare, and adding a public option. She also said she supported expanding Medicaid in North Carolina, which the state legislature has so far refused to do, although the Republican-led General Assembly got closer in the last session than it had since Medicaid expansion became an option during the Obama administration.

Asked if they would accept the results of the Nov. 8 election, Budd and Beasley both said they would.

In a recent article in The New York Times, Budd declined to say whether he'd accept the results of the election.

“Why wouldn’t I accept the results of the 2022 election?” Budd said.

Budd said he did think Joe Biden was legitimately elected president, despite voting against certifying the election after the Jan. 6 attack on the Capitol.

“The core of that vote was to inspire more debate,” Budd said. “I do stand by that vote.”

“I don’t like what Joe Biden is doing at 1600 Pennsylvania Avenue,” he said, but “he is the president.”

Beasley said she would accept the result of the election next month. She attacked Budd for his vote against certifying Biden’s election and for calling participants in the Jan. 6 attack “patriots.”

“He continues to spread the big lie of the 2020 election,” Beasley said.

In recent ads, Republicans have accused Beasley of denying the results of her last election, when she lost her seat on the N.c. Supreme Court. Beasley took the opportunity to defend herself.

“What I asked for was a fair, legal recount, and once I saw the results I was happy to concede,” she said.

Asked about legalizing marijuana, Beasley and Budd gave opposite answers.

“I am not a supporter of legalization, especially of recreational marijuana,” Budd said.

For her part, Beasley said, “I support legalizing cannabis.”

“There’s a real opportunity for our farmers to diversify their crops,” she added.