Democrat Cheri Beasley and Republican Ted Budd are in a close race to be North Carolina's next senator.

A dozen men sat around the tables inside a classroom at the Davidson County Sheriff’s Office, not far from downtown Lexington. They included sheriffs from neighboring counties and Republican leaders in the General Assembly. Sen. Thom Tillis and Congressman Ted Budd, campaigning to be the next Republican U.S. Senator from North Carolina, sat in the center.

Chuck Edwards was there too, the Republican nominee to replace Rep. Madison Cawthorn in Congress.

The topic was immigration, and more specifically “sanctuary cities” where the county jails don’t cooperate with immigration authorities to check residency status for people who are arrested for crimes.

Billed as a “roundtable discussion” with sheriffs, elected officials and candidates, the session was more of a campaign event for Budd to lay out his priorities for immigration. 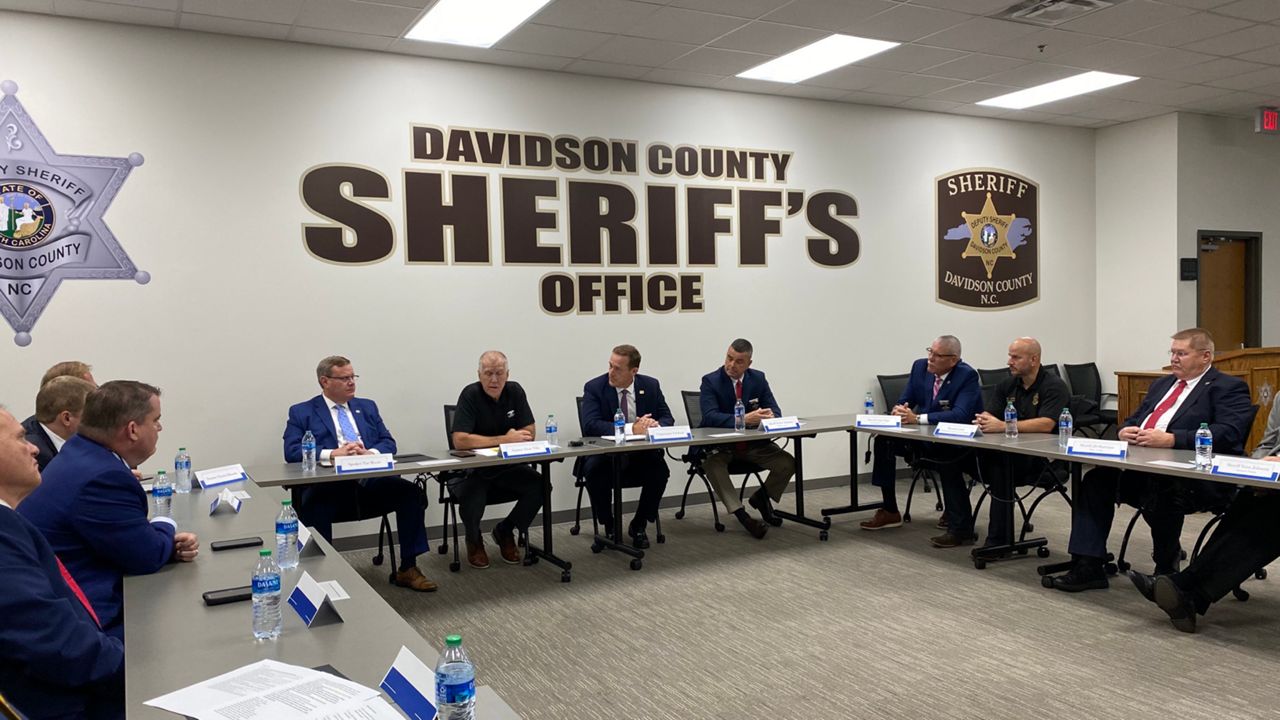 A week later, a dozen farmers gathered on picnic benches at a produce stand in South Durham to talk to Cheri Beasley, the Democratic candidate for Senate.

The group sat under the trees at Perkins Orchard. The event was billed as another “roundtable.” These “roundtable discussions” have become standard fare around North Carolina this election season, giving candidates a chance to focus on one issue, both for people invited and the press that stand back around the tables.

The farmers, a cross-section of small farmers, processors and owners of bigger agriculture operations, talked to Beasley about their struggles with rising prices for fuel and fertilizer. They also talked about bigger issues like historic racism, encroaching development and how to keep a farm family farming for another generation.

The midterm elections are in 60 days. Beasley and Budd are in a close race to replace Sen. Richard Burr in Washington D.C.

Beasley has been hosting several events around the state in a steady beat each week. Budd has kept something of a lower profile so far in the campaign.

The Senate race in the Old North State is one of just a few competitive contests in the country that could decide the balance of power in Washington D.C. Republicans have won the last two Senate elections in North Carolina, but the state is divided politically. In the 2020 elections, the state went for former President Donald Trump, but Democrat Gov. Roy Cooper won reelection by a healthy margin.

The latest polling shows a close race for Beasley and Budd. A poll by Republican-leaning Trafalgar Group found Budd in the lead among likely voters earlier this month. Budd had a 3-point lead in that poll, just outside of the 2.9% margin of error.

But a separate poll by the nonpartisan Public Policy Polling in late August found Beasley up by a single point among North Carolina voters. That poll had a margin of error of 4%. 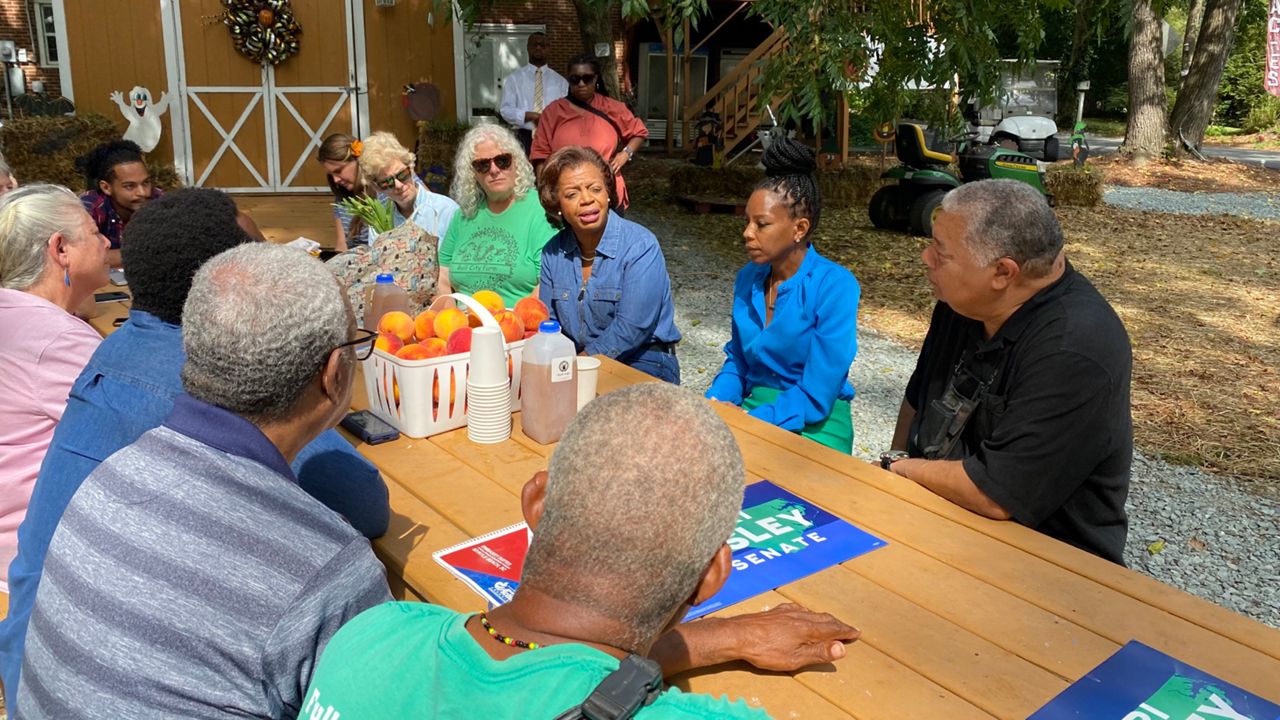 Cheri Beasley met with farmers and other in the agriculture industry in Durham. The conversation focused on the issues farmers are having with rising prices. (Photo: Charles Duncan)

“There’s a particularly large gap when it comes to how much enthusiasm each of their party bases has for them,” according to Public Policy Polling.

To look at the polls, the race is essentially tied.

“North Carolina Senate races in recent years have broken toward the GOP at the end because of superior turnout on their side — it will be interesting to see if Democrats liking Beasley so much more than Republicans like Budd will bring any change to that trend this year,” the polling group said.

The question for both candidates is what they think will bring more voters out to the polls to vote for them. Republicans in the Senate and House races have focused on economic issues, like inflation and gas prices, arguing that the GOP will be better stewards of the economy than the Biden administration.

For Democrats, they have also focused on the economy, arguing that President Joe Biden’s policies are working to bring down costs, pointing to lower prices at the pump. The other big issue Democrats hope will rally voters is abortion.

Since the U.S. Supreme Court overturned Roe v. Wade, abortion has emerged as a top issue in the election. Democrats nationally have united around a message that they would protect abortion rights while Republicans would take them away.

That message from Democrats became even stronger after voters in typically red Kansas rejected an amendment that would have severely restricted abortion access.

Another data point in the election is fundraising. Beasley’s fundraising has been much stronger than Budd’s this year, and she did not have to spend money on a hard-fought primary like her Republican opponent. One other factor is that Democrats have outraised Republicans in North Carolina Senate races before only to lose come Election Day.

There are big important issues for the country that the next members of House and Senate will decide in the coming years, including support for the war in Ukraine, possible federal legislation on abortion, how to help the economy and rising prices, action on climate change and other big national questions.

Another big issue hovering over the election is Budd’s support for the former president, including voting not to certify the election in 2020, and how that could impact voters’ decisions. Donald Trump endorsed Budd in the primary.

North Carolina’s Senate candidates have not publicly agreed to a debate so far. Budd did not take part in the Republican primary debates. But it will be up to Beasley and Budd to make their cases to voters with just 60 days left until the election.