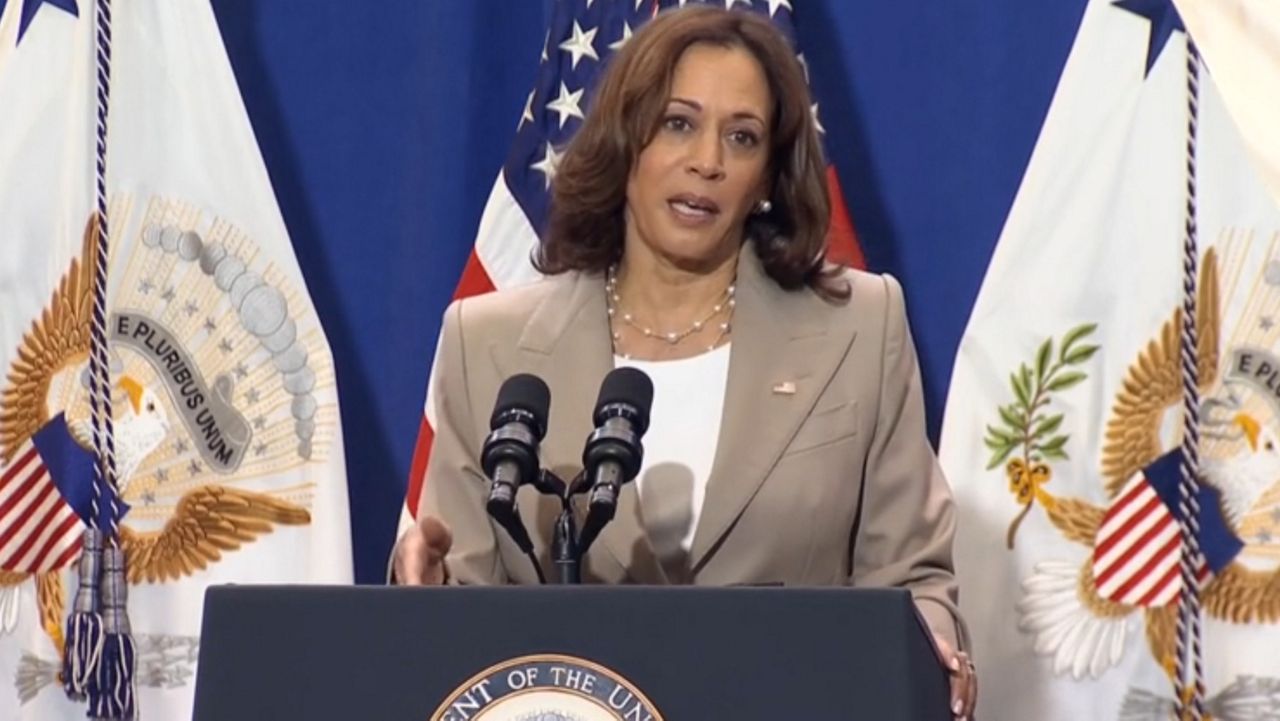 DURHAM, N.C. — Vice President Kamala Harris toured a senior center in Durham, North Carolina, on Thursday and spoke about efforts to reduce drug prices for seniors. Following the tour, Harris talked about the Inflation Reduction Act and what it will do to lower prescription drug costs for seniors.

Starting next year, Medicare recipients will have a cap of $35 a month for insulin. And starting in 2025, seniors will have a $2,000 annual cap on what they have to pay for prescription drugs.

“For years, the largest drug companies have made billions of dollars in profits selling drugs for 10 to 100 times the cost of what they make,” Harris said.

“Access to health care should be a right, not a privilege for those who can afford it,” she said. “It’s about your health and it’s about more. We’re talking about an essential need. We’re not talking about a luxury.”

“Our seniors for so long have been saying, ‘Our prescription medication is just too expensive,’” Harris said in an exclusive interview with Spectrum News 1's Mary Helen Jones after her speech.

“So many of our seniors, as we were talking to today in Durham, have over a dozen different prescriptions,” Harris said.

The visit to the Durham Center for Senior Life is part of the vice president’s fifth visit to North Carolina since the Biden administration took office.

Gov. Roy Cooper, introducing Harris, said elected officials have a responsibility to take care of people as they age.

"How are we going to treat them?" Cooper said. "Do we make them choose between food and medicine? Too many have to."

Harris said 9% of seniors in the country live in poverty, and for women over 80, that number is 14%.

“Millions of seniors still struggle to afford the health care they need and deserve,” she said. Many on Medicare have to pay more than $100 a month for insulin to treat diabetes and can spend up to $10,000 a year for prescription drugs.

She said many people have had to ration their insulin when they can’t afford to refill their prescription.

“A diabetic who goes for too long without insulin could fall into a coma or even die,” she said.

A major change to health care is requiring Medicare to negotiate drug prices with pharmaceutical companies. Before the new law, a 2003 federal law prohibited Medicare from negotiating better costs on prescription drugs.

“The pharmaceutical industry has argued that allowing the government to negotiate drug prices would stifle innovation,” according to the Kaiser Family Foundation, which tracks health care policy.

Harris’ visit to Durham came hours before the president was expected to make a major speech in Pennsylvania on the “soul of the nation” and what he says are threats to democracy from former President Donald Trump and his supporters.

After her speech, Harris told Spectrum News 1 that any federal laws on abortion could hinge on the Senate race in North Carolina between Republican Ted Budd and Democrat Cheri Beasley.

“Elections matter. And the election right here in North Carolina will matter," she said after the speech.

After her visit to the senior center, Harris planned to participate in a Democratic fundraiser in Durham before returning Thursday to Washington, D.C.