The latest study on a 43-mile commuter rail line in the Triangle lays out some serious challenges for the $3.2 billion project.

Will the Triangle ever get commuter rail? 5 things to know about the decades-long effort

DURHAM, N.C. — A proposal to run commuter rail service from Durham to Raleigh, and possibly as far east as Clayton, faces some major technical challenges and costs that could add up to more than $3 billion to get the line rolling.

The discussion and debate has gone on for decades. Numerous commissions, committees and civic groups have been studying some kind of rail service for the Triangle region since the early 1990s.

The debates involved every level of government: town and city councils, state and federal, along with big companies like Norfolk Southern and Amtrak. It’s a complicated process. But while since 2007, Charlotte has been able to open a roughly 19-mile light rail line, a streetcar, and a second light rail line in the works, the Triangle has never gotten a plan off the ground.

The Triangle region expects to add more than a million more people by 2050, and that would mean about a million more cars on the roads, according to GoTriangle, the regional transit authority.

“A robust commuter rail system can provide 12,000 to 18,000 trips each day and help relieve some of the projected traffic congestion,” GoTriangle said in a statement.

The latest idea, for a 43-mile route from West Durham to Garner or Clayton, has been in the works for more than a decade. GoTriangle released a new feasibility study in December and is gathering public input until Feb. 19.

What is the current proposal?

The latest report, titled the Greater Triangle Commuter Rail Feasibility Study: Phase II Summary Report, takes a close look at the technical challenges to building out a commuter rail line. The budget to get the line up and running is as much as $3.2 billion. 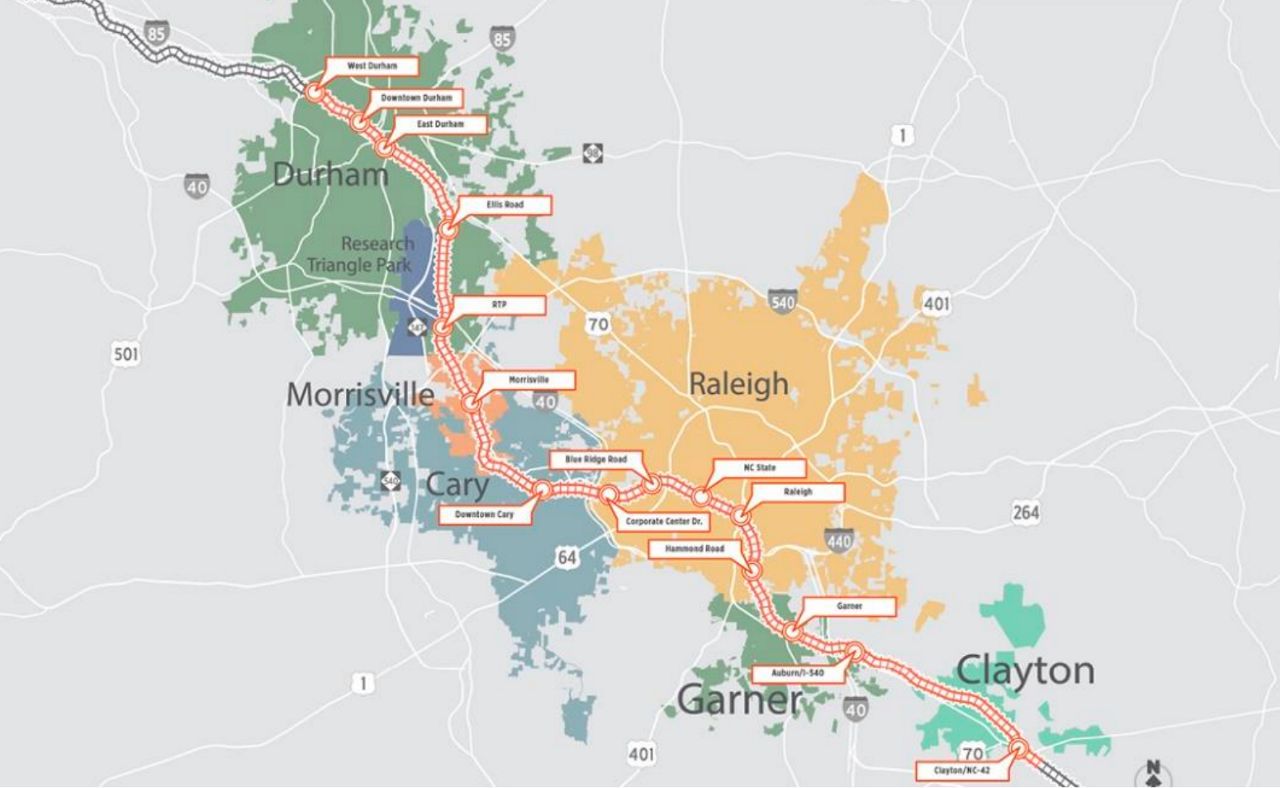 The 43-mile commuter rail line would have 15 stops between Durham and Clayton. (GoTriangle)

The commuter rail line would run along the existing rail corridor. The line would be 43 miles long and have 15 stops between West Durham and Clayton.

The entire project would take 10 to 12 years to complete.

The plan envisions having eight trains running per hour during peak morning and evening rush hours and two trains running during off-peak times from Durham to Garner. That would mean trains arrive about every 30 minutes during peak times. The route from Garner to Clayton would have fewer trains.

The study also looks at the different fares for the train service, from free to a zoned approach that would charge up to $4.50 for a ride from Durham to Clayton. Under the zone model, a ride from downtown Durham to Raleigh’s Union Station would cost $3.50. The current rate for GoTriangle’s regional bus service is $2.50.

How much would it cost?

There are a lot of technical details that would have to be worked out, but GoTriangle estimates the cost would be about $3.2 billion. That money would pay to buy the trains, lay new track, build new station platforms and do everything else to get the line up and running.

The annual operating costs would be about $43 million, according to GoTriangle.

Where’s the money coming from?

The main source of funding for the commuter rail project would came from the half-cent sales tax increases voters approved in Wake, Durham and Orange counties. This is the way Charlotte has funded much of the new light rail system for the Queen City.

“Durham, Orange, and Wake Counties passed the required referenda in 2011, 2012, and 2016 respectively, and the transit plans for each County determine how the revenue from the transit tax is spent,” GoTriangle said in the report. Orange County is not included in this project.

Johnston County does not have the half-cent sales tax to pay its share of the cost, so it’s not clear what the funding would look like for the eastern end of the line.

Members of the Durham County Commission are considering an update to that county’s transit plan this month. Durham County’s plan includes spending more than a quarter of its transit budget on supporting the commuter rail line.

Federal funding may also be available to help cover the costs to build the new line. The GoTriangle report states the project probably won’t qualify for the main federal transit grant program. But there may be money available from the Bipartisan Infrastructure Law that could help cover some of the costs.

What are the biggest challenges?

The report details a number of technical challenges to get the route built. The easiest portion is from Raleigh Union Station to Garner. The middle portion, from Research Triangle Park to Union Station is a little more difficult. The hardest part to pull off would be in Durham.

“Adding track and station infrastructure downtown in Durham will be highly visible and inevitably cause disruption during construction,” the report states. GoTriangle said it has figured out options to get all the work done.

“However, moving forward will require buy-in from all affected stakeholders, and there is currently not consensus among the parties on the design,” according to GoTriangle.

“Three stations are currently planned in or near downtown Durham. Implementing service in this area would be complex and costly due to the built-up nature of the land around the corridor, a limited street grid with challenging at-grade crossings and low-clearance bridges,” according to the report. Add that to historic buildings, big universities, a fast-growing downtown and limited land, and the challenges multiply.

There are other challenges with getting the train service running.

“Complex agreements are needed between Norfolk Southern, CSX, Amtrak, NCRR, NCDOT, and the Town of Cary to govern operations in the Raleigh-Cary portion, and negotiations of these agreements will take time,” the report states.

GoTriangle is taking comments on this latest feasibility study until Feb. 19. The transit authority and the partners in the project are working to refine the cost estimates and figure out opportunities to get more federal grant money.

If Wake and Durham counties, and all the other groups and government involved, approve this latest report, it will be time to start spending some real money to move the commuter rail line forward.

If everyone agrees to move forward, the next steps would include preliminary engineering and environmental studies. GoTriangle estimates this would be 5% to 10% of the construction cost, which could be up to $30 million or more. Money for the next steps would come from the counties’ local transit plan funding.

There is still a long road ahead to make the commuter rail project a reality. A separate project to run a light rail line from Chapel Hill to Durham was scuttled by Duke University in 2019. GoTriangle had already spent more than $150 million in planning, engineering and environmental work for that 17.7-mile route.

If the project continues apace, it would be at least a decade before commuters could hop on a local train in Raleigh for a ride to Durham or vice versa.

GoTriangle is hosting several events in the coming weeks to explain the plan.