Carolina Panthers quarterback Sam Darnold recovers a fumble for a touchdown during the second half of an NFL football game between the Carolina Panthers and the Denver Broncos on Sunday, Nov. 27, 2022, in Charlotte, N.C. (AP Photo/Rusty Jones)

CHARLOTTE, N.C. (AP) — Sam Darnold has been waiting more than 10 months for another chance to prove he can lead the Carolina Panthers.

It finally came on Sunday, and he made the most of it.

Darnold threw for a touchdown and recovered his own fumble for another score in his first game since Jan. 9, helping the Panthers beat the Denver Broncos 23-10 and keep their modest playoff hopes alive heading into a bye week. Carolina (4-8) is last in the woeful NFC South but only 1 1/2 games behind division-leading Tampa Bay.


Darnold completed 11 of 19 passes for 164 yards without a turnover in his first game since losing the starting job to Baker Mayfield in training camp and then suffering a high ankle sprain in the preseason. He's the third QB to start this season for the Panthers, joining Mayfield and P.J. Walker.

“Once I got my feet wet out there and threw my first completion I felt like it was smooth sailing, especially given the way we were running the football," Darnold said.

The Panthers finished with 185 yards on the ground, getting 113 on 24 carries from D'Onta Foreman — his fourth 100-yard rushing performance in the last six games. That allowed Carolina to use the play-action pass effectively, and Darnold hooked up four times with D.J. Moore for 103 yards, including a 5-yard touchdown.

Darnold, who regained the starting job after Mayfield was benched, refused to say he took any vindication from the victory.

“It truly isn't about me,” Darnold said. “There are so many guys that have a hand in this. ... I would be silly to sit up here and take all of the credit. It was truly a team effort.”

“I loved how he was able to get outside of the pocket and try to win with his feet and still have his eyes down the field to execute,” Wilks said.

Carolina's defense limited Russell Wilson to 19 of 35 passing for 142 yards and sacked him three times, sending the Broncos (3-8) to their seventh loss in eight games. Pro Bowl defensive end Brian Burns had two sacks of Wilson, including a forced fumble, and he tipped a pass at the line of scrimmage to end another drive.

Denver came in with the worst scoring offense in the league and didn’t find the end zone until a 1-yard TD pass by Wilson with 3:24 left in the game, a performance sure to turn up the heat even more on embattled first-year coach Nathaniel Hackett.

Denver's frustration was evident in the fourth quarter when Wilson and defensive lineman Mike Purcell exchanged words on the sideline.

The Panthers led 10-3 when Darnold drove the Panthers to the Broncos' doorstep and scored an unusual touchdown midway through the third quarter.

After faking a handoff from the 2, Darnold made a move toward the end zone and was stripped of the ball. But the QB alertly picked up the ball and then rolled into the end zone untouched for a 17-3 lead. 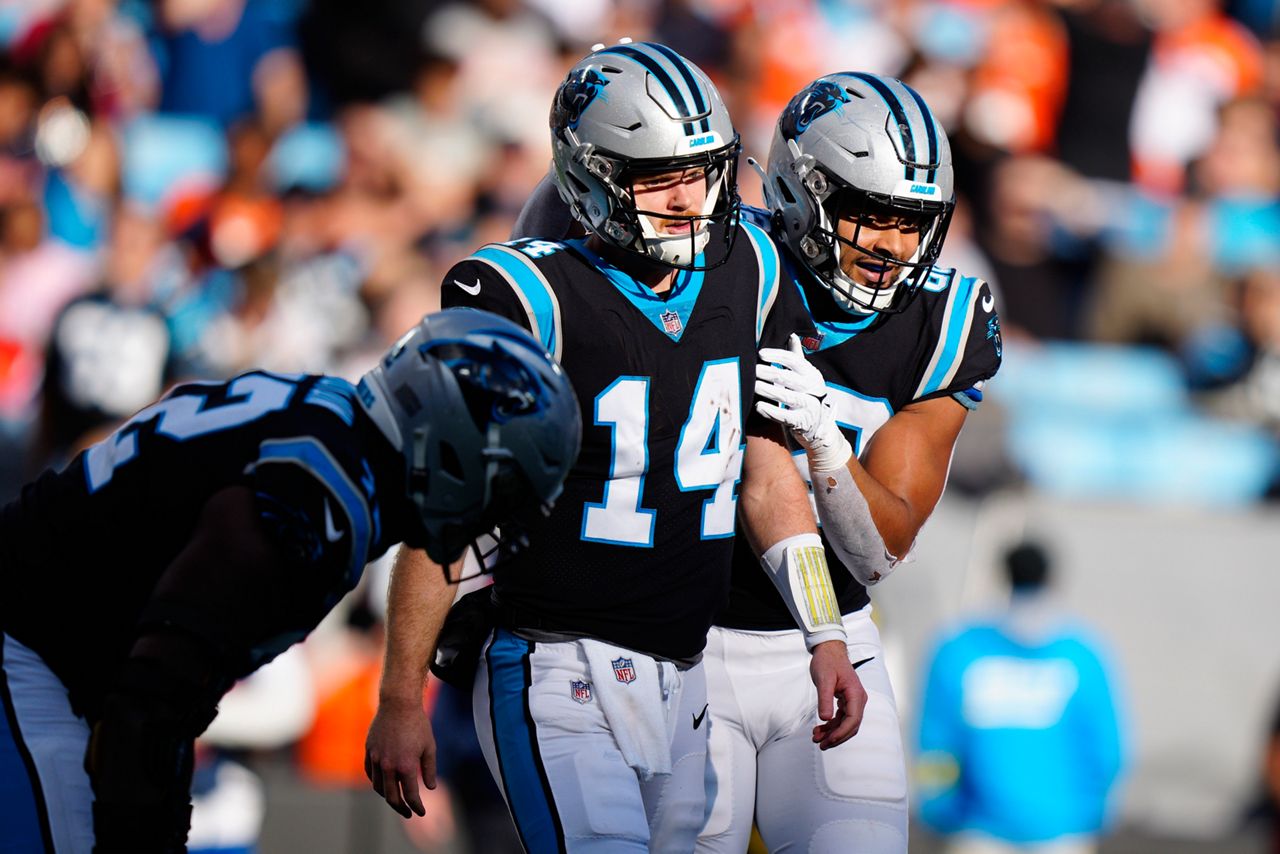 Carolina Panthers quarterback Sam Darnold (14) celebrates after scoring during the second half of an NFL football game between the Carolina Panthers and the Denver Broncos on Sunday, Nov. 27, 2022, in Charlotte, N.C. (AP Photo/Jacob Kupferman)

“That is someone who is in tune to the situation and understands the rules of the game,” Wilks said. “He was quick to get on the ball and then realize no one touched him.”

The Panthers put the game away early in the fourth quarter when Darnold hit Moore in stride on a 52-yard bomb along the right sideline, setting up a 26-yard field goal by Eddy Pineiro to make it a three-possession game.

“We felt like we could really run by these guys,” Wilks said. “As good of a secondary as they have, sometimes they sit and squat on things. So it was good to see that.”

Hackett was asked about his job security but mostly sidestepped the question.

“We all have high expectations. We want to win every football game. We all have to get better across the board. And that starts with me,” he said

The Broncos came into the game having scored a league-low 34 points in the third quarter and did not score Sunday. Hackett said the team scripted its third-quarter plays in hopes of remedying the issue.

“That didn’t work well,” Hackett said. “We’ve got to find better ones.”

The Broncos and Panthers came in as the league’s worst two teams at converting third downs and nothing changed there. Carolina was 2 of 12 on third down and Denver was 4 of 14.

Broncos: At Baltimore on Sunday.

Panthers: After a bye, visit Seattle on Dec. 11.