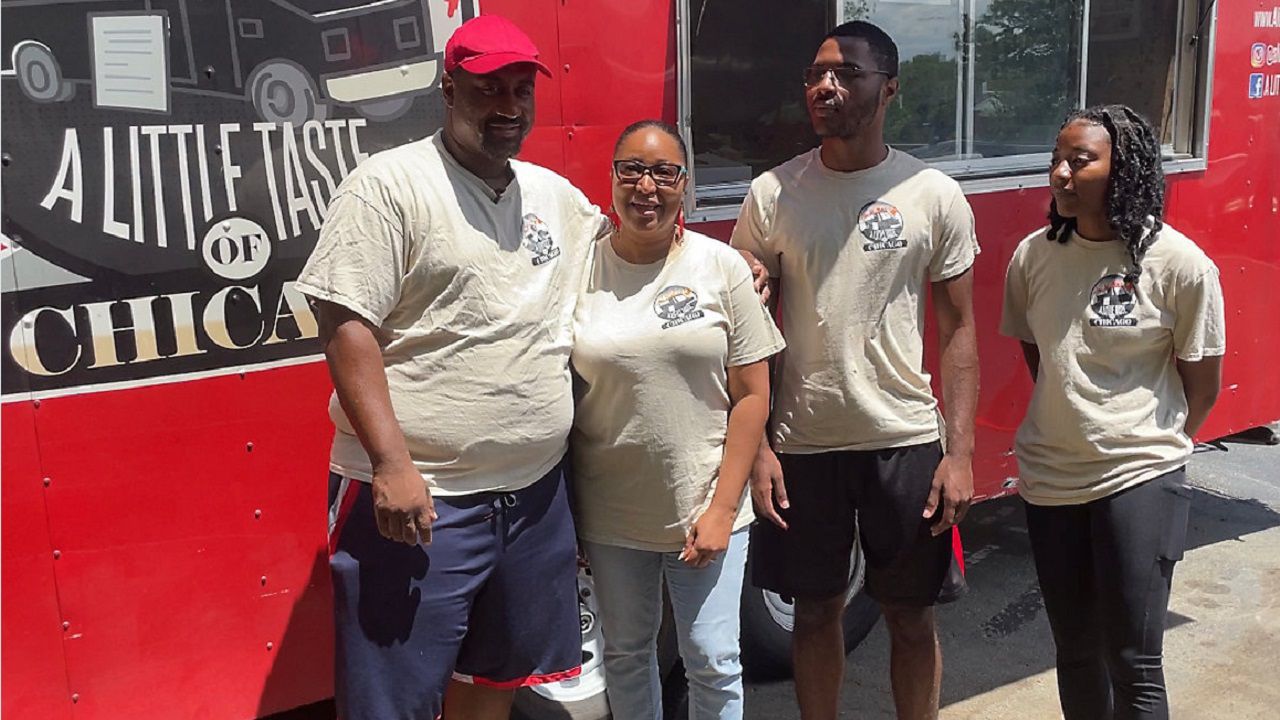 Kelvin Walker, with his wife and kids, standing in front of his food truck business. (Spectrum News 1/Jennifer Roberts)

CHARLOTTE, N.C. — A Charlotte man followed his dream of becoming his own boss by starting a food truck, and now he is inspiring others to follow their dreams too.

According to the U.S. Bureau of Labor Statistics, over 47 million people voluntarily quit their jobs in 2021.

The quitting period has been coined "the Great Resignation," as people left their jobs after the pandemic began. Many of those workers were seeking flexibility and more opportunities to pursue different career interests.

One entrepreneur left his corporate job in the months preceding the Great Resignation. He's hoping to encourage anyone with a dream to go after the job they want — no matter the difficulties.

Kelvin Walker, a native of Chicago, has been married to Latoya Walker for 20 years.

The couple has raised three children in their household: Kelvin Jr., Kaleah and their goddaughter Danielle.

"Our kids mean the world to us," Kelvin Walker said. "Being able to make sure we can spend time with them. They all participated in sports."

His family relocated to Charlotte in 2009 for work opportunities. At that time, Walker was employed for a human resources outsourcing company.

But like millions of people embracing the Great Resignation stage, Walker was ready to leave his career behind.

Walker says his family has always been top priority, and he eventually chose to leave a 9-5 career so he'd no longer have to choose between attending his kids' sporting events or his job.

He desired a career with more flexibility, where he could run a business built on his passion: food.

Walker says he never went to school for cooking, nor worked in a restaurant. He learned how to whip up Chicago favorites, like the Chicago hot dog from his mother and uncles.

Walker says working in corporate America motivated him to save up money so he could one day pursue his love of cooking full time.

In 2019, Walker launched A Little Taste of Chicago food truck business. Walker ran the company while still working at his outsourcing job.

Then in 2020, right before the pandemic hit, Walker decided it was time to leave the corporate world altogether.

"I had already spoken to my boss, I had already moved to a part-time status," Walker said. "I was slowly transitioning out on my own terms."

But two weeks after talking with his boss, Walker started receiving notifications about Charlotte-area events vendors he depended on getting canceled because of COVID-19. Walker decided to stay at the corporate job a bit longer.

But as time passed, Walker says his part-time food truck business at A Little Taste of Chicago started picking up. The uptick in customers propelled Walker to take an entrepreneurial chance and leave his outsourcing job.

In October 2020, Walker became his own boss full time.

Walker says A Little Taste of Chicago brings in over $22,000 a month in profits, which more than covers his expenses and costs.

But investing in your own business can be expensive. Walker says the startup costs for food trucks are in the thousands.

"Just the truck alone with the equipment was $55,000. That's not including any of my startup costs for the food," Walker said.

Walker says the investment in being his own boss is beyond worth it. His dream job is giving him something his former employer couldn't provide — flexibility.

"Make sure I can financially provide for my family without any compromises," Walker said.

"I'm just grateful for my husband always keeping us first," Latoya Walker said. "This means a lot for us to be able to have a business and him to still be that husband and a father to his children. He hasn't missed a beat."

Walker says the food truck continues to be in high demand in the Charlotte area. He hopes his story motivates other aspiring entrepreneurs to take a leap of faith.

"I say go for it, now is the time," Walker said. "More people are willing to invest in small-business ventures. You have a lot of people supporting small businesses. Look forward to doing your own thing."