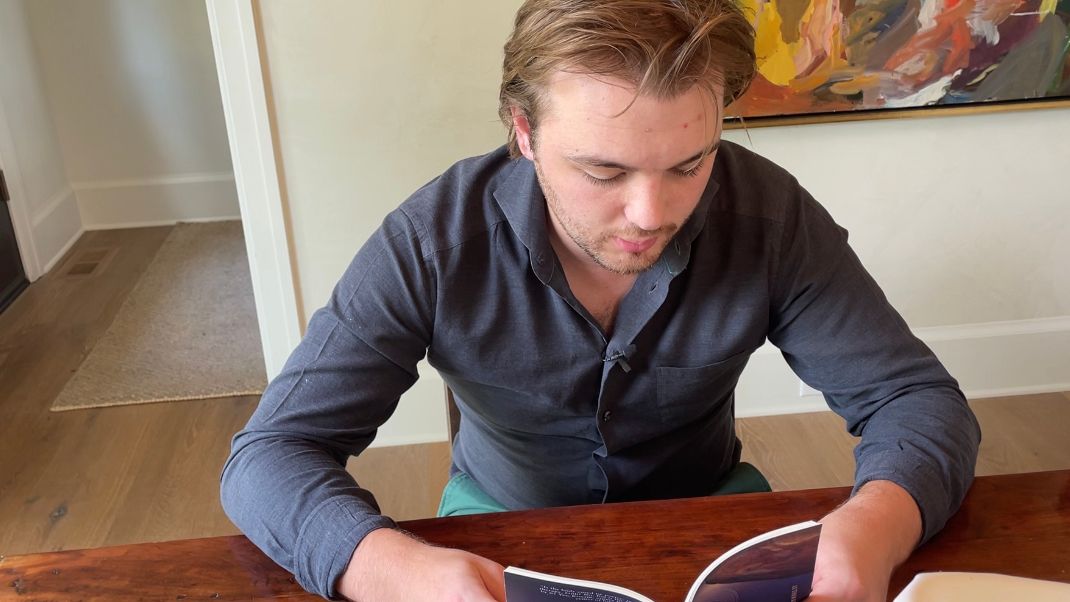 Luther Kissam, 22, reading a page from his poetry book, "Have I Told You About My Superpowers."

CHARLOTTE, N.C. — According to the Centers for Disease Control and Prevention, 1 in 5 Americans will experience a mental illness in a year's time.

A UNC Charlotte student is sharing his story as a testimony: people can still thrive, even with a mental health condition.

Luther Kissam, 22, is a published author, who's using his writing as a way to overcome challenges with mental health.

"I've always known I had a mood disorder of some sort," Kissam said.  "I started therapy and taking meds in the fifth grade. I had a rough time growing up, I didn't feel like I fit in."

At age 16, while in high school, Kissam says he was diagnosed with bipolar l disorder with psychotic features.

"It was a big challenge on me and my family, my loved ones, everyone that cares about me," Kissam said.

Living with the disorder has presented a great deal of challenges for Kissam.

Although it can be hard to describe how it feels living with a bipolar disorder, Kissam says he realizes telling the story doesn't have to be perfect, but instead, "good enough." That way his words will inspire other people going through similar hardships to keep going and never give up.

During manic episodes, Kissam says he experiences euphoric highs where he feels invincible, like a superhero.

“Sometimes when I'm manic, I think I have superpowers," Kissam said. "They call them delusions of grandeur. Sometimes I think I can fly. Or I'm seeing hidden messages or I can stop moving vehicles by just standing in front of them."

"You have to be of sound mind in order to do sound work for your college classes," he said.

Kissam says he's found a way to stay on track with his studies by putting some of his life experiences on paper.

Earlier this year, Kissam released his first poetry book, "Have I Told You About My Superpowers." He says each page represents how people can overcome any challenges they're facing, one day at a time, just like he did.

"It represents to me learning how to be resilient while living with bipolar disorder," Kissam said.

He says there's a stigma surrounding mental health and he hopes his writing plays a part with erasing it.

"Fighting the stigma, it's one of those challenging things when people look at you differently than who you think you are," he said. "I think in writing and accomplishing things, I can break that."

One of the pages is titled, "Poem in Which I Refuse to Answer My Phone and My Voicemail Inbox is Full."

Part of the excerpt describes how Kissam felt after a loved one called his phone:

"The saddest part is I have the energy to answer and even talk, but I refuse to be a burden on anyone, anymore than I already am. I know I am not a burden-like my brain knows."

"My grandmother, God bless her soul, she calls me all the time. I wrote this poem about ignoring her phone call repeatedly. Because I didn't think had any worth or was worth listening to," Kissam said.

Kissam says he wrote some of the book while receiving treatment at a center and discovered writing helped him deal with life's struggles.

"Everyone needs a creative outlet, particularly those with unique and challenging experiences," Kissam said.

Kissam is taking the lessons he learned from writing the book into the classroom so he can graduate and receive his bachelor's.

He is studying English at UNC Charlotte. When days get tough, he writes poems to release his stress. Then he's able to focus on his homework.

"This is actually my third attempt to graduate from college. But third time's the charm. It's definitely going to happen now," Kissam said.

Kissam initially attended Emory University in Atlanta, but he had to take a medical leave.

"I was 18 years old, I has just lost my best friend to suicide, and I was suffering with bipolar depression," Kissam said. "My mental health deteriorated and I needed to be closer to home [in Charlotte] and have moral support."

Kissam says he then relocated to Charlotte.

He says they provided him the mental health care treatment he needed.

"I met a lot of like-minded people and people who were also struggling with the things I was struggling with," Kissam said. "I was able to not feel alone, which can be really challenging when you feel really depressed. That sense of community I got at HopeWay was extremely powerful."

"That part in your life from ages 18-25 is a time when you're trying to learn how to become a young adult," Marra said. "Especially with all the stressors and the pandemic and going to college, life is a lot more stressful now than when we grew up. So, these kids really need help with coping mechanisms and helping them understand their sense of self and develop healthy skills to live."

Marra estimates HopeWay has seen a 50% increase of young adults in the 18-25 age bracket who've needed treatment for mental health.

"We need to invest in our youth," Marra said. "We need more access to mental health care for everyone, but that particular group really needs it."

Kissam says HopeWay helped patients to not only function with their disorder, but to utilize a talent that brings meaning and positivity to their lives so they can flourish. He say this process included utilizing art and music therapy.

Kissam dove right into the talent he says he loves and re-energizes him the most, writing.

"For me, writing is one of those things that makes my life worth living," Kissam said. "For some people, it's watching basketball or spending time with their family or both. Everybody needs to have things that make them feel happy and alive."

He says this treatment helped prepare him to go back to the classroom.

Kissam transferred to UNC Charlotte. He continued to use writing as a way to deal with stressors on the college campus.

Kissam ended up taking a second medical leave shortly after the pandemic hit.

"One winter, after COVID, I didn't really adjust well to online school, so that made it challenging for me to say the least," Kissam said.

He's back on the UNC Charlotte campus. With published author checked off his to-do list, Kissam feels empowered to graduate and pursue writing full-time.

Kissam says he now has the confidence to show the world all he has to offer it. He hopes everyone hearing his story will do the same.

Kissam's book was published by Little Star. You can purchase it on Amazon or at Park Road Books in Charlotte.