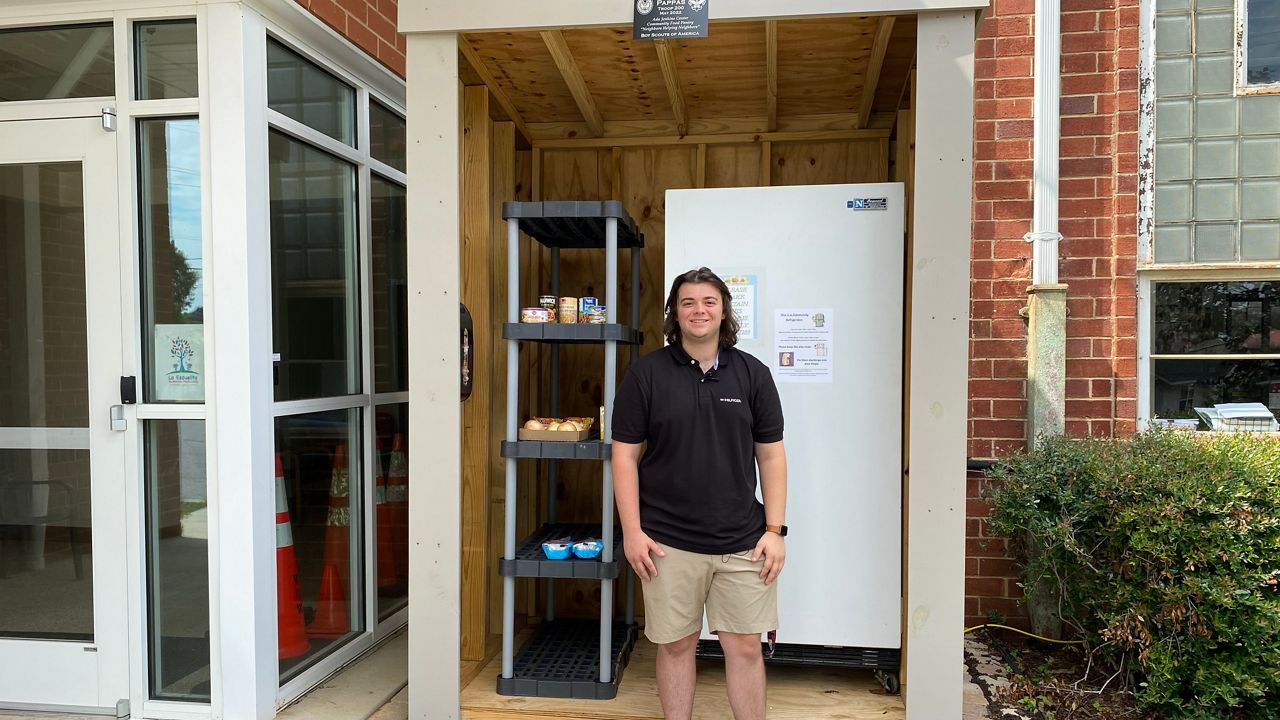 Everyday Hero: An Eagle Scout on a mission to feed community in need

DAVIDSON, N.C. — An 18-year-old from Cornelius went the extra mile to give neighbors access to fresh food, and at any time of day.

Andrew Pappas is behind a community refrigerator at the Ada Jenkins Center.

The fridge is stocked with free fruits and vegetables.

Pappas’ chose this as his Boy Scouts capstone project, known as the Eagle Scout Service Project.

He lead, planned, fundraised and volunteered 60 hours of his time to make this project a reality.

Pappas acquired the donated fridge, brought it to its current location, built a shed around it with the help of a retired contractor, and donated a shelf for non-perishable items.

“Just to give people in the community a bigger variety and better life with their food,” Pappas said.

Volunteering at a Catholic Diocese of Charlotte food pantry with his family inspired him to choose to help with food insecurity.

“I think everyone deserves a chance at fresh fruits and everything,” Pappas said.

The Ada Jenkins Center is a nonprofit organization, helping people in need become financially stable. The organization has an indoor food pantry.

“A lot of people think Lake Norman is a very affluent area, but we have plenty of poverty here. Our poverty rate runs about 10% here, and we want to make sure we help those families. They are all our neighbors, they are all part of our community,” Ada Jenkins Center Pantry Coordinator Heidi Acker said.

In May, the center opened four times and served 94 people. In June, it had five shopping days and served 165 people.

“As we seen inflation take effect, we are starting to see more people,” Acker said.

The outdoor fridge gives people who are food insecure more options when the pantry is closed. She advises people to grab the food they need at the moment.

“People are welcome to come any time and take what they need, when they need it,” Acker said.

Pappas worked with Acker to make this project a reality, which had been on the center’s wishlist for a while.

“While it was a project that I wanted to work on, having him plan it, lead it up, set it up and build it, has just been wonderful. It was a way for us to get it up and going quicker than I would’ve probably been able to do on my own,” Acker said.

Pappas, who was part of the Troop 200 at Ramah Presbyterian Church in Huntersville, earned his Eagle Scout award in June for this project.

As far as his future goals, Pappas plans to volunteer as an assistant scout master and attend Central Piedmont Community College for a year. After that, he wants to pursue a mechanical engineering degree at a university.

Click here for more information about the Ada Jenkins Center and their indoor food pantry, which will likely be open one more day a week to fill the need.