ALBEMARLE, N.C. — Classic storefronts line the downtown district. There are a dozen or so bars and restaurants. A new brewery is planning to open this summer in an old fire station behind Albemarle City Hall.

Albemarle, like a handful of other cities and towns in North Carolina, is considering creating a "social district" downtown, where people can walk around with open containers of beer, wine or another alcoholic beverage of choice.

The hope is to bring more people and business to Main Street, the center of this small city near Uwharrie National Forest, about an hour east of Charlotte.

“The social districts, with all the great outdoor space we have, this is just another way for people to enjoy those,” said Joy Almond, Main Street manager for the City of Albemarle.

The North Carolina General Assembly passed a law last year allowing cities to create districts where people can buy a drink from a restaurant or bar and walk the streets.

Greensboro, Kannapolis, Monroe, Norwood and Newton have registered new social districts with the North Carolina ABC Commission since the law went into effect, according to commission spokesman Jeff Strickland. The ABC Commission oversees alcohol sales in the state.

Charlotte, New Bern, Wilmington, Winston-Salem and smaller cities, like Albemarle, are considering their own social districts.

Almond said she’s been looking at how Hickory’s social district has been helping business there.

“They shared a lot of great feedback and a lot of great comments about how good it has been for business, not just for restaurants and the drinking establishments, but also for the retail stores. They are getting a lot of the foot traffic and really benefiting from these districts,” she said.

Albemarle hosted two public input sessions Monday to get some early feedback from residents on how they feel about creating a social district downtown.

This is in a town that was dry until the late 1990s, said Almond, who grew up not far from the city.

At Monday afternoon’s public hearing, residents shared several concerns, including making sure there’s no underage drinking, making sure businesses follow the rules, what enforcement would be like and potential problems with people littering.

“I do not want to see Bourbon Street in our downtown,” Almond said in response to one resident’s concerns, referencing the main tourist destination in New Orleans, the scene of notorious revelry and drunken bacchanal.

Just behind city hall, Colton Baker is working to convert an old firehouse into Albemarle’s first brewery. He’s renovating the building and waiting for his brewing equipment to arrive in a couple of weeks. 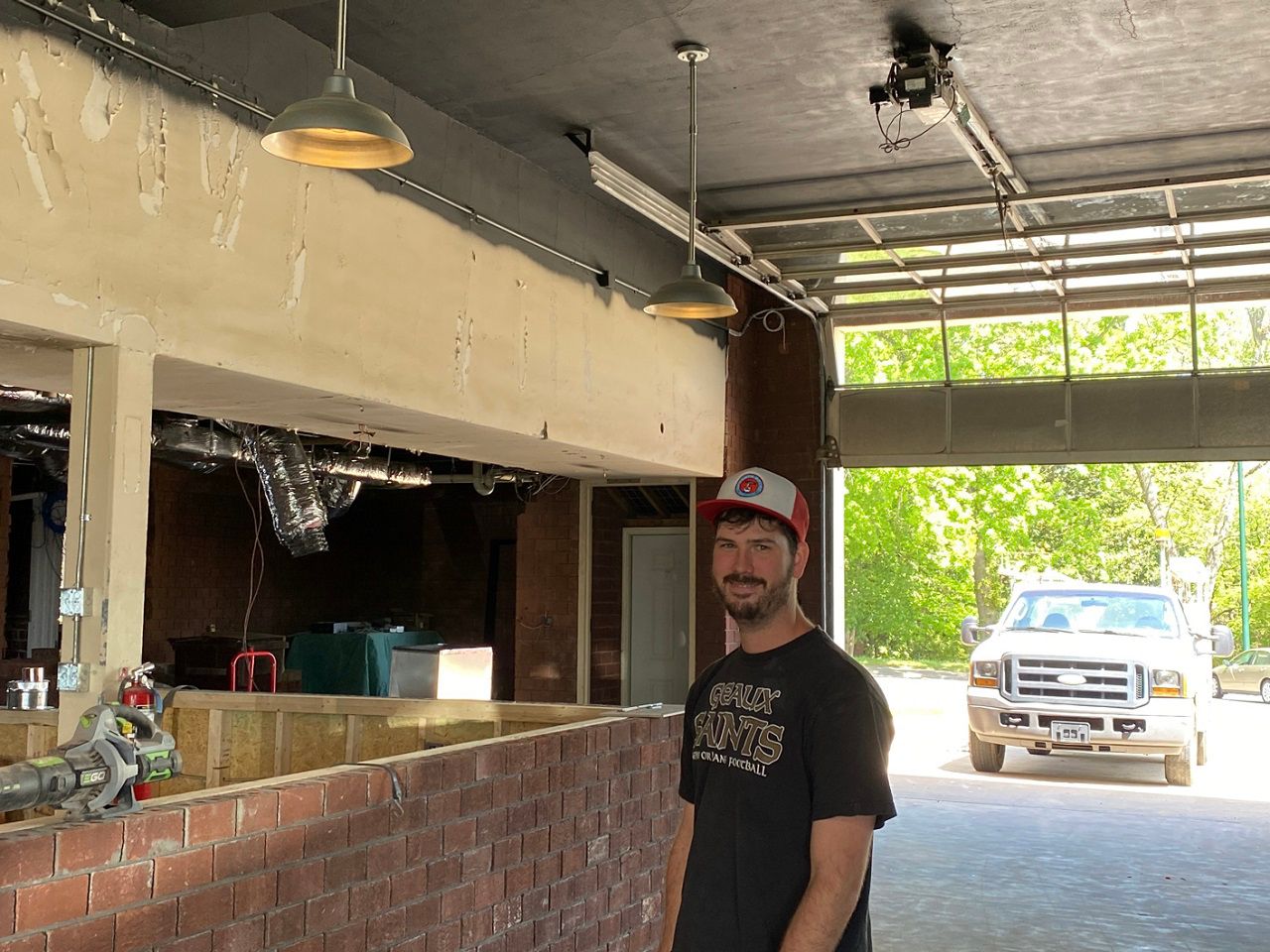 Colton Baker is working to open Albemarle's first brewery this summer in an old fire house next to city hall. (Photo: Charles Duncan)

The building’s been cleaned out, the roof repaired and a new bar is taking shape where city fire trucks once parked, awaiting the next call.

He said he plans to get Uwharrie Brewing open this summer.

“I really am a big fan of that social district because it will help me be able to pull more people in,” he said. He’s planning a tap room in the wide bays for the fire trucks, where he can open the bay doors for good airflow and put more seating outside on the wide driveway.

The social district could be a game changer for downtown Albemarle, Baker said.

“I think it will really drive foot traffic downtown, especially a lot of the retail establishments. There will be more people walking around,” he said.

“Most businesses, retail establishments, close at 1 or 2 in the afternoon on a Saturday,” Baker said. “Maybe this will incentivize them to stay open because there’s a lot more people downtown. I understand why they’re closed, you know, you don’t really see that many people downtown on a Saturday afternoon.”

“I really hope that will help drive some of that growth we need downtown,” he said.

The legislature passed the law last year allowing for cities and towns to create their own social districts, but there are a lot of specifics that towns have to follow.

Albemarle still has a long way to go before the social district becomes a reality.

“Right now we are in the preliminary stages,” Almond said.

Once the city gets feedback from the community, they can start fine-tuning the idea to present it to the city council. That means finalizing a map of the social district boundaries, setting hours for when public drinking would be allowed and making sure elected leaders and residents are onboard with the idea.

Greensboro launched its new social district on March 1, running through the middle of downtown. The city has 25 bars and restaurants where customers can leave the premises with an adult beverage, as long as they keep it within the boundaries, and only between noon and 9 p.m.

In Hickory, the social district encompasses about a dozen blocks along Main Avenue, with public drinking allowed from 10 a.m. to 10 p.m.

The proposal for Albemarle so far includes seven or eight blocks in the downtown area. Almond said she’s not sure what the hours could end up being when she formally proposes the idea to city council.

At Monday’s public input session, opinions were split on the social district. It will ultimately be up to city council members to decide on the plan and work out the details in the coming months.