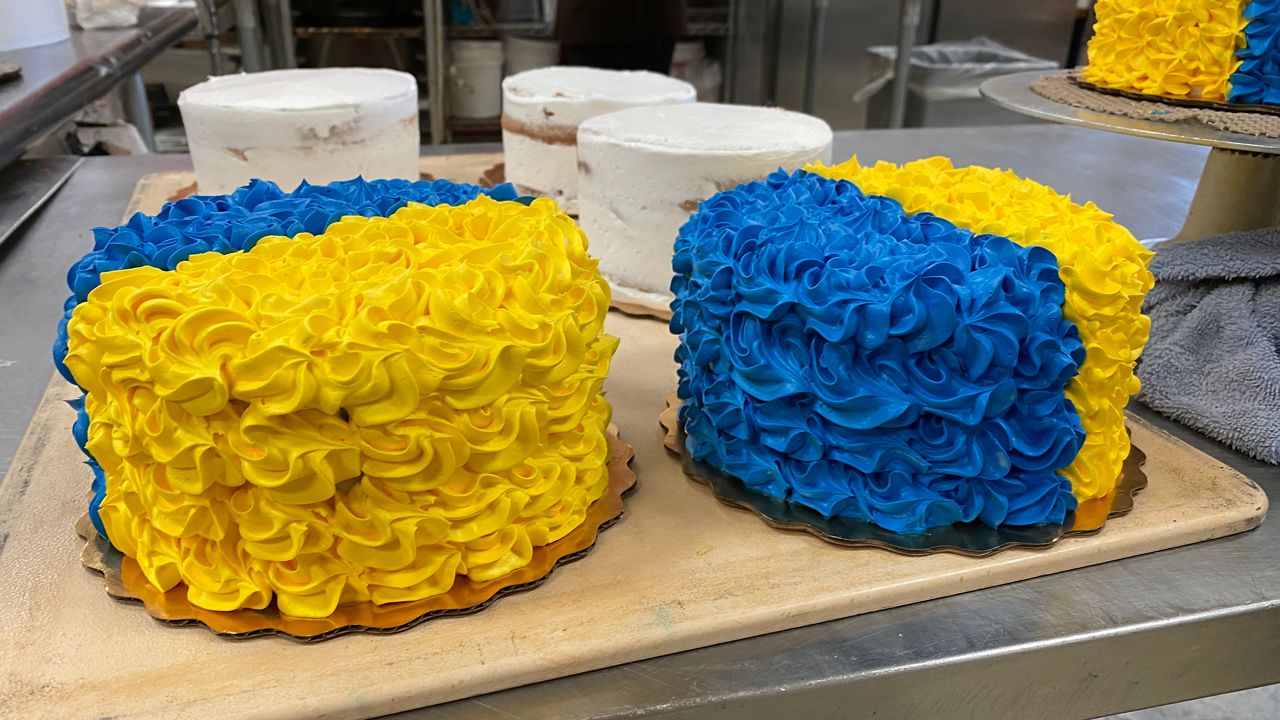 CHARLOTTE, N.C. — A Charlotte bakery said it is baking goods to help the people and pets of Ukraine.

Manolo Betancur, the owner of Manolo’s Latin Bakery on Central Avenue, said he wanted to help Ukrainians because he understands some of what they are going through.

“Man, I’m an immigrant. I am a victim of the Colombian war, and I cannot keep waiting for the government for people to keep talking and not do anything,” Betancur said in his bakery Monday.

So, he and his staff got to work baking cakes to raise money for Ukrainian causes, particularly those set to help refugees leaving the country.

“One hundered percent of the net of this cake is going to go to local bakeries in Poland, that we already made the connection, the contacts. Then they are feeding, they are giving bread and birthday cakes to the refugees that are coming from Ukraine,” Betancur said about the yellow and blue cakes in his display case.

The cakes are a homage to the Ukrainian flag. At $19 a piece, Betancur said the net profits will go to a network of Polish bakeries working to feed immigrants with bread and other items near the border. Already, Betancur said he was working with people in London to get the money to Poland.

Also at the bakery, Betancur is leaning on Mardi Gras celebrations to help fund another source of Ukrainian aid.

“Ten percent of the profit for these king cakes goes to an organization in Ukraine. They have a shelter for the people that are leaving their pets,” Betancur explained while rolling king cake dough.

He’s worked at the bakery since 2005, and said in the 17 years he’s had with his staff, they’ve made it through a lot.

He felt inclined to share the goodwill with others, especially after learning of the conflict.

Manolo’s Latin Bakery has brought in roughly $3,000 for Ukraine since Friday, and Betancur said he had long lines in the store over the weekend, once word got out.

“It’s very touching man, like the humanity that this community has — Charlotte. It’s a lot of good good people in this area,” Betancur said.

And, he has no plans to stop.

“As long as there is a war man. Hopefully after the war, because there is going to be devastation. I hope this war to end today, right now, when they are having conversations. But, whatever it takes man. You know, we are all the same, we are the same race, human race,” Betancur added.

The Ukrainian flag cakes and king cakes are not the only things they are doing to help Ukraine. They are also helping Ukrainians here in Charlotte. Betancur said any Ukrainian family, which visits the store, and says they have a birthday in the family will get a free cake.

“I want for them to kind of pick a cake, and the money that they were going to spend on that cake they can send it to their families, to relatives. Because, they need more than myself, than this business, that money,” Betancur said.

Manolo’s Latin Bakery is located at 4405 Central Avenue in Charlotte.