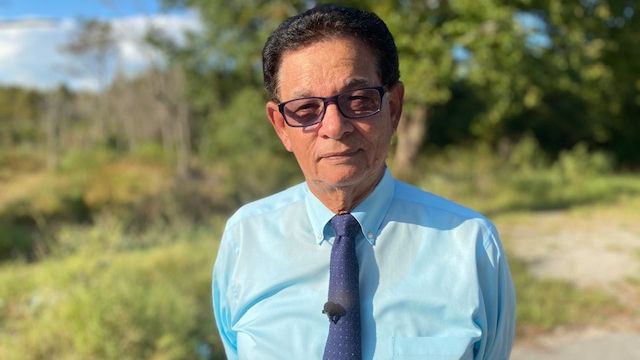 Charles Graham. The current state lawmaker and former special education teacher is running for the Democratic nomination in the 9th District.

WASHINGTON — There’s a serene setting tucked away near the southern border of North Carolina. But with the exception of a small marker, its history could easily be overlooked.

“To be honest with you, this is a part of history that isn’t known outside of Robeson County,” said N.C. State Rep. (D) Charles Graham.

The piece of history Graham is referring to happened in 1958.

Members of the Ku Klux Klan were planning a rally near the town of Maxton. But when they arrived, there was a surprise. Reportedly hundreds of Native Americans were standing in protest, some of them armed.

While no one was hurt, gunfire was exchanged and the KKK left.

It became known as the Battle of Hayes Pond.

“As of a result of 1958, the Klan never came back. That was it to the best of my knowledge," Charles said.

This month the spot was also the launch site for Graham’s campaign for Congress.

I’m an educator, a legislator, a small business owner, and a proud member of the Lumbee Tribe.

“Very pleased with the support I’ve seen across the country,” Graham said.

Graham is a member of the Lumbee Tribe in Robeson County. It’s a diverse county with a mix of Native Americans, whites and Blacks.

The current state lawmaker and former special education teacher is running for the Democratic nomination in the 9th District. It’s an area that stretches from rural Robeson County to the suburbs of Charlotte.

In 2018, it attracted national attention for an absentee ballot fraud investigation that resulted in a special election being called.

“It’s not on my mind. We know what happened three years ago was something that was unfortunate,” Graham said.

Today, the seat is held by Republican Dan Bishop, who won his most recent election by 11 points.

His campaign didn’t make him available for this story.

Graham’s chances will likely depend on the redistricting process, which is underway now.

“If the ninth maintains its current makeup, it will shrink some. But if it maintains most of the counties that are in it, it will be a Republican leaning [district],” Catawba College Politics Professor Michael Bitzer said.

But he’s still a Democrat running in a red part of the state.

“If I had to identify myself, I would most likely definitely align with the moderate platform,” Graham said.

He voted for HB2, which was the controversial bathroom bill. It was later repealed, but not until after the North Carolina politician faced criticism for what many saw as discrimination against people who are transgender. He apologized for the vote earlier this month.

Graham’s road to turn the district blue may be uphill, but he plans to guide his campaign by a model once woven through this county.

“I’m determined to run a campaign that’s going to use the same tone of 1958. United, working together," Graham said.

A message that once stopped hatred dead in its tracks.