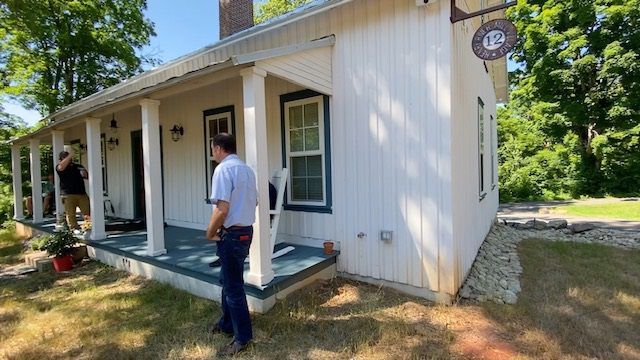 Vacationing at 'The Hunger Games'

BOONE, N.C. — Calvis Reyes remembers it like it was yesterday. His family was looking for land to build a home and stumbled onto Henry River Village.

Henry River Village was once the home of mill workers

Now, they have transformed one of the homes into a vacation spot

"I called her up, 'we have to buy this place I cant tell you why,'" Reyes said.

The property is 75 acres with 20 abandoned homes and a big empty country store.

"There’s a story here, it has to be told, and we are the ones I think that are supposed to tell it," Reyes said.

There are many stories hidden in the walls. The history on the land began in 1905. Homes were built around a large mill that has since burned down after being struck by lightning. The families who lived there had no running water and no sewers.

"There was no job anymore because the mill shut down, and so, it became abandoned," Reyes said.

It stayed that way until it was found by the producer filming "The Hunger Games." The abandoned village transformed into District 12.

"Most people come for "The Hunger Games" but they stay for the history, the stories of the people," Reyes said.

They decided it shouldn't stay abandoned any longer. Now, they have transformed one of the homes into a place you can stay. They used all found objects just like it was done back in the 1900s. They are telling the story of those who lived here and the movie that made it what it is today.

"They were beyond mill workers and they have their stories and quirks, and we want to learn about them and why they are here," Reyes said.