NAGS HEAD, N.C. — Sea-level rise has become a fact in the future planning for North Carolina’s coastal towns and cities. Some towns on the state’s coastline have embraced the idea of adapting to sea-level rise, but others have not.

Projections show sea level could rise anywhere from a foot to eight feet by the end of this century, depending on what countries around the world do to curb climate change.

The Outer Banks town of Nags Head has worked, planning around sea level rise, into just about every aspect of the town, including its zoning code, stormwater and flood planning and dune protection.

“We don’t necessarily focus on sea-level rise. We focus on all of the impacts associated with climate change,” Nags Head planning director Michael Zehner said.

The town has done big beach nourishment projects in 2011 and 2019, pumping sand from the ocean floor up to the beach. The town has another one planned for 2022. But, he said, they are also working on less visible projects.

“If you live here, people are more concerned day-to-day with frequent sound-side flooding,” he said. They are looking for a contractor now to help make a plan for making the sound side of the island more resilient.

They’re also working on plans for how to deal with septic systems with rising groundwater.

Holly White, the principal planner for the Town of Nags Head, said community input was a driver in planning for sea-level rise and climate change.

The town worked for years to come up with a set of plans and rules to help deal with sea level rise, including raising homes, rebuilding the beach and dealing with heavy rains that can flood streets.

Extreme weather is not new for the Outer Banks, Zehner said. But they are seeing more erosion on the beaches and more frequent and severe storms, he said. 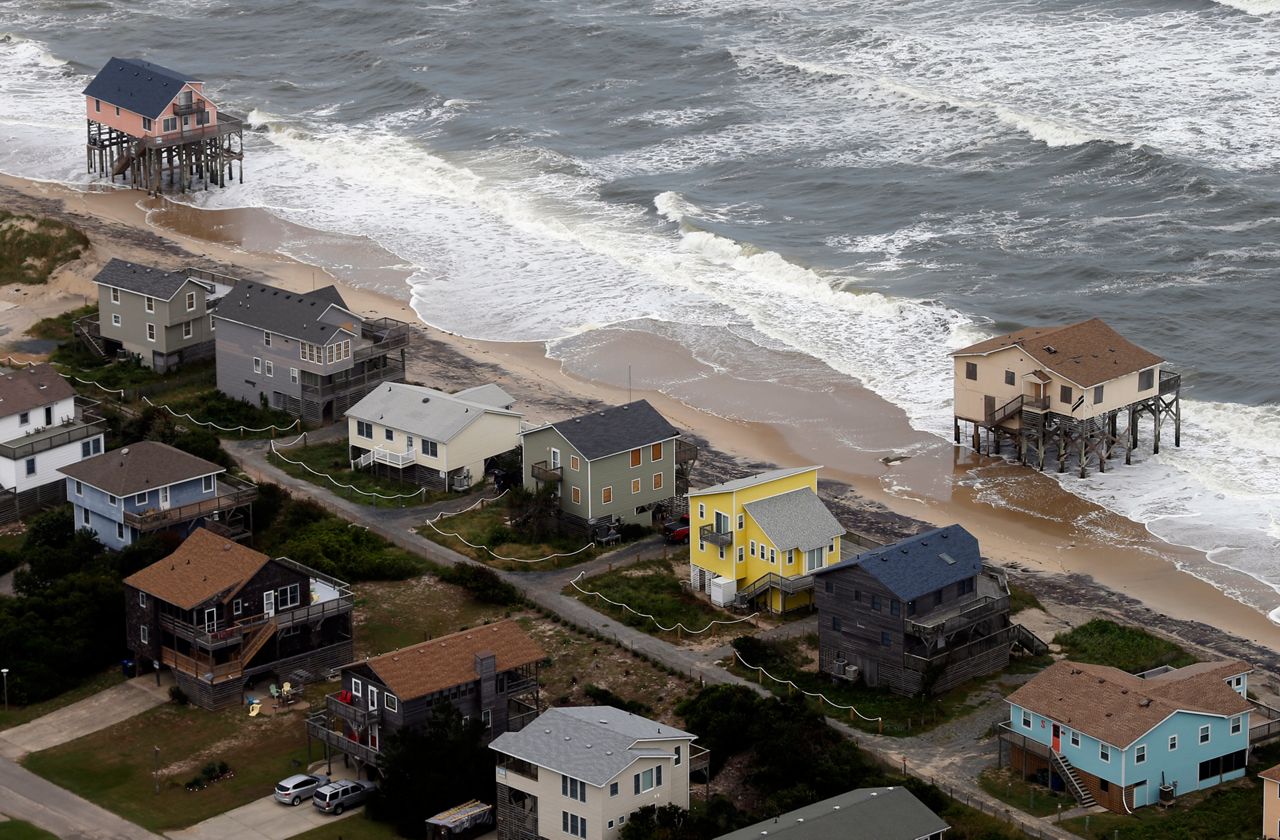 The average annual rate of sea-level rise varies along the coast. In Oregon Inlet, not far from Nags Head, the rate is about 5.3 millimeters a year.

In Southport, in the southeast corner of the state, the rate is more like 2 millimeters a year. Scientists generally agree those rates will increase in the coming decades.

Coastal towns may have limited options about what they can do to adapt to rising sea levels, and many places are already seeing beach erosion and high tide flooding as the sea slowly rises.

“We can look at certain areas and use those projections to understand and, I would say, better plan for where we might try to move, try to modify, or not. Those are tough questions that we have to ask moving forward,” said Reide Corbett, director of East Carolina University’s Coastal Studies Institute on Roanoke Island.

“We are limited in what we can do,” he said.

For long-term solutions to sea-level rise, towns along the ocean and on the sound side have limited options. They can raise homes - many communities require new houses to be elevated - and they can move homes.

A recent study found that Norfolk, Virginia, which also has growing problems with tidal flooding, would need to spend about $575 million on sea walls to protect the city, according to the Center for Climate Integrity.

The most common solution to deal with sea level rise over the past couple of decades has been replacing sand on the beach with big renourishment projects.

“Is a method that’s being used up and down North Carolina, up and down the East Coast,” Corbett said. “It works temporarily. It doesn’t stop the process of sea-level rise or shoreline erosion. It curbs it ... it slows it because you’re adding additional material to the beach.”

“These communities aren’t doing that thinking it’s solving a problem. They know they are buying time, and it’s presented that way to their community. That often creates some challenges in putting that money up. It’s not cheap to do,” he said.

None of the solutions are cheap when it comes to handling sea level rise. Even some of North Carolina’s most recognizable landmarks are at risk.

In 1999, the National Park Service picked up the Cape Hatteras Lighthouse, and slowly moved it back away from the eroding shoreline. It took 23 days to move the iconic lighthouse 2,900 feet back to keep it safe from the encroaching ocean.

The Park Service is considering moving another of the state’s landmark lighthouses. Officials are weighing the options of moving the 198-year-old Ocracoke Lighthouse to higher ground.

Wilmington has similar problems with high tide flooding, especially when combined with big storms, like hurricanes that raise the level of the Cape Fear River.

The city requires any new buildings to be elevated at least two feet above the Federal Emergency Management Agency’s floodplain regulations, according to Kathryn Thurston, the floodplain manager with Wilmington’s Planning Department.

“Our city council, a long time ago, thought it would be a good idea to have a higher standard,” she said.

“Most of the flooding I see is after a storm,” Thurston said, when heavy rains from a slow-moving hurricane like Matthew or Florence, raise the levels in the Cape Fear River.

But Wilmington’s waterfront has been seeing more king-tide flooding from sea level rise, when the tidal cycle created the highest tide, especially when the river is high.

“Ultimately, when Water Street floods, there’s nothing much to do,” Wilmington planning director Glenn Harbeck said. 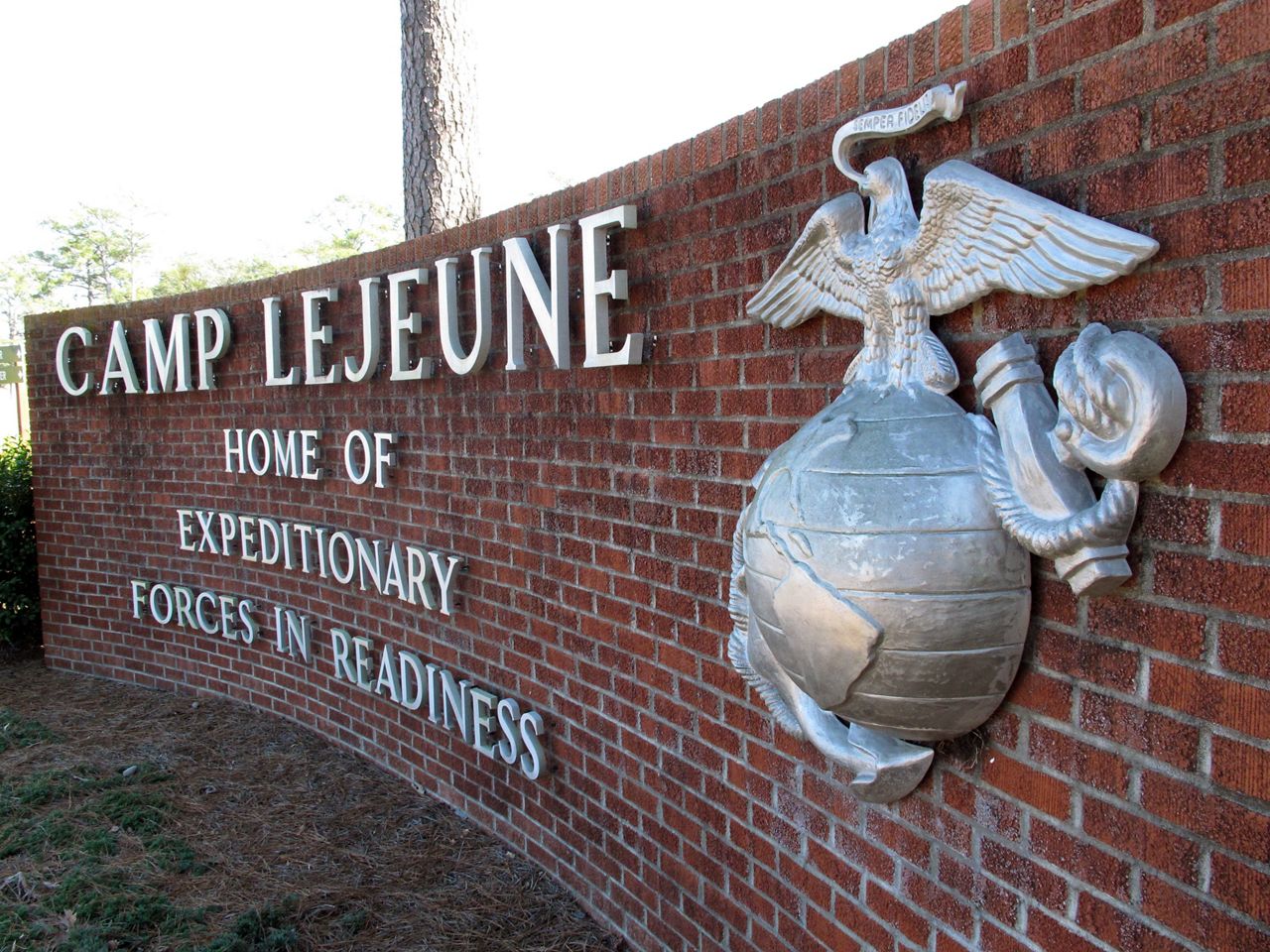 “That riverfront has been there for 250 years,” he said. “It’s a challenge to retrofit something that’s been there 250 years.”

A little north up the coast, at Marine Corps Base Camp Lejeune near Jacksonville, the Department of Defense is taking more proactive measures.

A 2018 report from The Center for Climate and Security delivered a stark warning for the base.

“Flooding of barrier islands will threaten Camp Lejeune as well as other nearby military facilities: By 2035 Onslow Beach, and other key barrier islands protecting the New River, may be overcome, allowing storm surges and tidal flooding to impact the housing, logistics, training, ammunition storage, and ranges along the estuary, especially concerning to Military Ocean Terminal Sunny Point, the nation's largest ammunition and weapons transport hub,” the report said.

Hurricane Florence did major damage to the base in 2018. Last month, the Marine Corps broke ground on a new headquarters building and other construction projects at Camp Lejeune, replacing buildings damaged in Florence.

“Following the 2018 hurricane season, the Department of Defense came away with a lot of lessons learned,” U.S. Navy Capt. Miguel Dieguez said at the ground breaking, according to the Marine Corps.

“We’ve changed our building standards to sustain what are more common, extreme destructive weather events,” said Dieguez, who is in charge of facilities at Camp Lejeune.

The Department of Defense will rebuild the base with stronger building codes meant to withstand big storms.

“There will be more robust structural requirements,” he said. “You’ll see more metal roofs on buildings than we’ve ever had. Hangars will no longer have vertical lift fabric doors. They’ve got to be metal doors so the multi-million dollar aircraft we’re putting inside it will be there when the hurricane passes.”

Absent big investments from the state or federal government, it’s up to towns and counties along the coast to figure out what to do.

“At the local level it’s a difficult situation,” said Rick Leuttick, director of the University of North Carolina’s Institute for Marine Sciences in Morehead City.

Living in coastal areas prone to hurricanes and flooding has been kept relatively cheap by the National Flood Insurance Program, he said. “The days of that happening, I believe, are rapidly leaving.”

Leuttick, who lives in a coastal community himself, said there are competing pressures on town leaders who rely on property taxes to keep things running.

“I appreciate the challenge that a lot of the local officials have in providing a stable revenue, trying to keep your tax rates low, offer services, and then say ‘we will sacrifice areas because of their risk,” he said.

“Somewhere along the line, wise decisions have to prevail,” Leuttick said, as the evidence of what sea level rise will mean for North Carolina continues to mount.

“Predicting the future is always challenging. And when the predictions of the future aren’t what you’d like them to be, there’s certainly an inclination to question that,” he said, but the evidence is clear that the state’s coastal communities need to prepare for the sea to continue to rise.

Click for Rising Oceans Part 2: What does sea-level rise mean for the future of North Carolina’s coast?