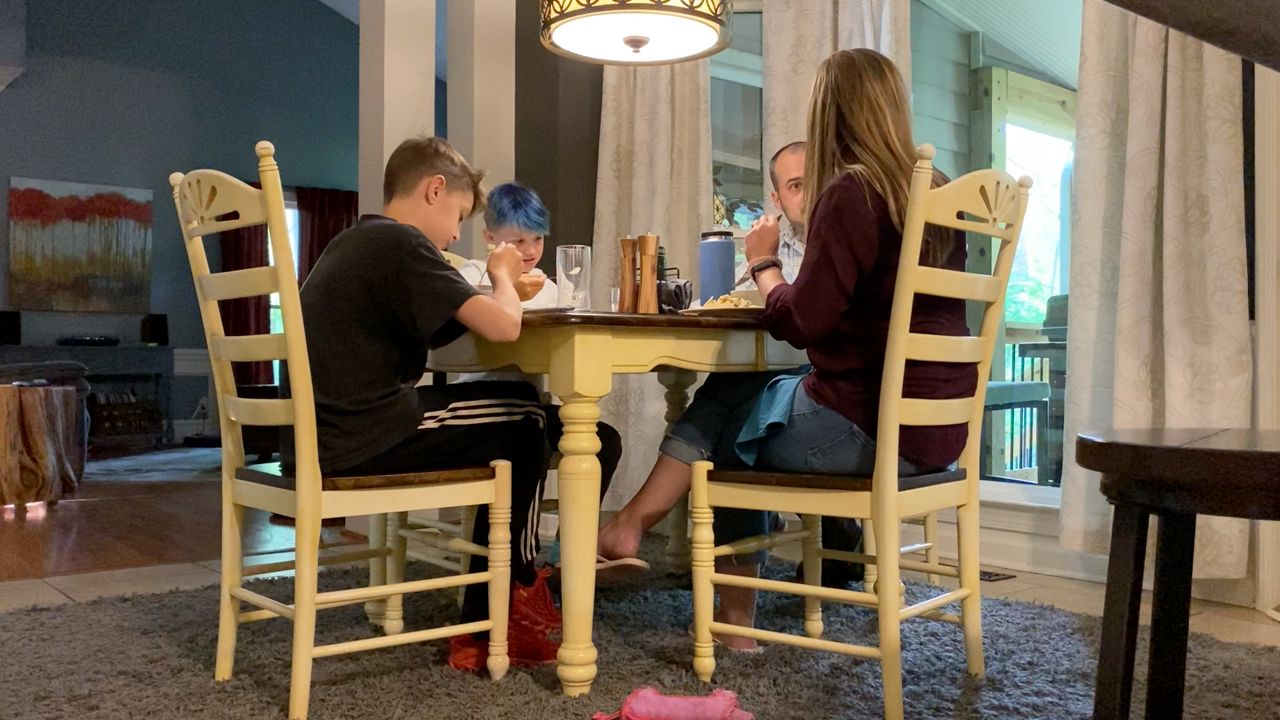 Parents and allies of transgender young people are worried about a slate of new legislative proposals introduced this year, which they said targeted transgender people.

One Charlotte mom said even though it looks like the proposed bills will not become law, the debate alone could increase cases of self-harm and suicide in young people.

The proposals ranged from bans on transgender affirming health care for minors, to bans on sports participation on high school and college teams.

Last month, the office of North Carolina Senate President Pro Tempore Phil Berger, a Republican, said at least one of those bills will not get a vote this year.

"We do not see a pathway to Senate Bill 514 becoming law. Additionally, it has not been referred to any committees, which is usually an indication that a bill will not advance through the legislative process. The bill will not be voted on the Senate floor,” read a statement from the senator’s office.

Proposed Senate Bill 514, otherwise called the "Youth Health Protection Act" would have banned access to affirming health care for transgender people under the age of 21, including puberty blockers and surgeries. The bill also would have required any "government agent" to report, in writing, to a minor’s guardian if they exhibited "symptoms of gender dysphoria, gender noncomformity, or otherwise demonstrates a desire to be treated in a manner incongruent with the minor’s sex."

Two other proposed bills would have banned transgender girls in middle, high school and college sports, and the other would have allowed health care providers to refuse treatment to patients if it went against their conscience.

House Speaker Tim Moore, a Republican, confirmed those bills were set aside as well.

However, a North Carolina parent said debate over the bills and conversations about them could and would be upsetting to transgender young people across the state.

Dumas is a mother of two in the Charlotte area.

Dumas and her husband said their 10-year-old son started voicing who he was at age 2 and pushing back on gender norms. At the time, they were not exactly sure how to handle it, so they usually denied his attempts to dress differently and go by a different name.

"I liked dressing him up in dresses, and so around the age of 3 or 4 he started pushing back on that, and then he asked to be called a different name and we said no,” Dumas said, reflecting on their previous experiences.

It was not easy, but eventually at around age 5, Dumas and her husband accepted what their son was telling them, because they wanted to be supportive parents.

Their son really wanted a buzzcut haircut at age 5, which they allowed. She said looking back, it opened the door to affirming who he was.

"That really ended up being the catalyst to him really embracing who he was and us really deciding this is better off,” Dumas said simply.

Dumas said her son immediately became happier, and that happiness is now reflected in all aspects of his life both at home and at school.

"When you let go, when you let them pick their clothes and go by the right names and use their pronouns, they flourish, and they smile,” Dumas added.

His smile, and keeping her family happy and mentally healthy, mean the world to her.

"They’re their own person, and let them be who they are, and that really helped us and became kind of my mantra over the years,” Dumas said.

Like a lot of families who discover they have a transgender child, they struggled at first, but Dumas said the help of friends, family, counselors, medical professionals and other parents going through the same thing helped them thrive.

They now have a dedicated team of physicians and counselors helping her and her husband decide what’s best for their son. Decisions are made together and follow a set plan made with input from all the parties involved.

It’s why Dumas is frustrated with proposed state bills which would have taken the ability to control those decisions out of their hands.

"I don’t understand how and why our government is inserting themselves into these conversations with our doctors, with our counselors, with our therapists. Why? That’s not freedom, this was not on a whim,” Dumas said.

In fact, she said it’s the opposite, when her son started puberty blockers last summer, the decision involved their counselor, her son’s pediatrician and the approval of her and her husband. It was also a part of the agreed-upon plan when they started affirming their son all those years ago.

“Let the doctors and the parents make those decisions,” Dumas continued.

Dumas also said the conversations about the proposed bills have already upset her son and his friends, especially as her 10-year-old has started to learn there are people who might not believe him.

“Just the fact that it’s being deliberated, he is learning things that he has never even really considered,” Dumas continued. “That there are people out there that are offended by him or wouldn’t want to be his friend just 'cause of who he is has already impacted his mental health. And that is, as a mother, terrifying.”

And she's not alone.

Jernigan is the founder of the Gender Education Network in Charlotte.

"We see these kids being marginalized very significantly, and through legislature, and so it made sense for us, because we can speak up, we can have that voice, we can be very loud. And, we're safe doing so. So, we chose to be loud about it," Jernigan said about he and his partner.

Equality N.C. and Charlotte Pride have also spoken out against the proposed legislation.

On the other side, groups like the N.C. Family Policy Council have spoken in favor of some of the legislation.

In a blog post on the N.C. Family Police Council website, its president, John L. Rustin, said, "This bill is an essential measure to protect the health, safety and welfare of adolescents, teens and young adults in North Carolina from chemical and surgical interventions that are destroying individual lives and families across our nation."

The N.C. Values Coalition is another group in support of some of the legislation. A banner across the top of its website urges North Carolina residents to encourage their elected representatives to save women's sports, referencing House Bill 358.

"Girls deserve equal opportunities to experience the thrill of victory. But allowing biologically-born males to compete in girls' sports disadvantages girls and destroys fair competition and the athletic opportunities we're supposed to be celebrating this month," a portion of the N.C. Values Coalition website reads.

From her perspective, Dumas said she's worried children across the state could become depressed, resort to self-harm and even suicide if these topics continue to be the subject of political debate.

“If somebody who was born male wants to put on a dress, who cares? Who cares? If they want to be called ‘Andy’ instead of ‘Maggie,’ who cares?” Dumas asks. "You can make them smile and give them a brighter day by going along with it."