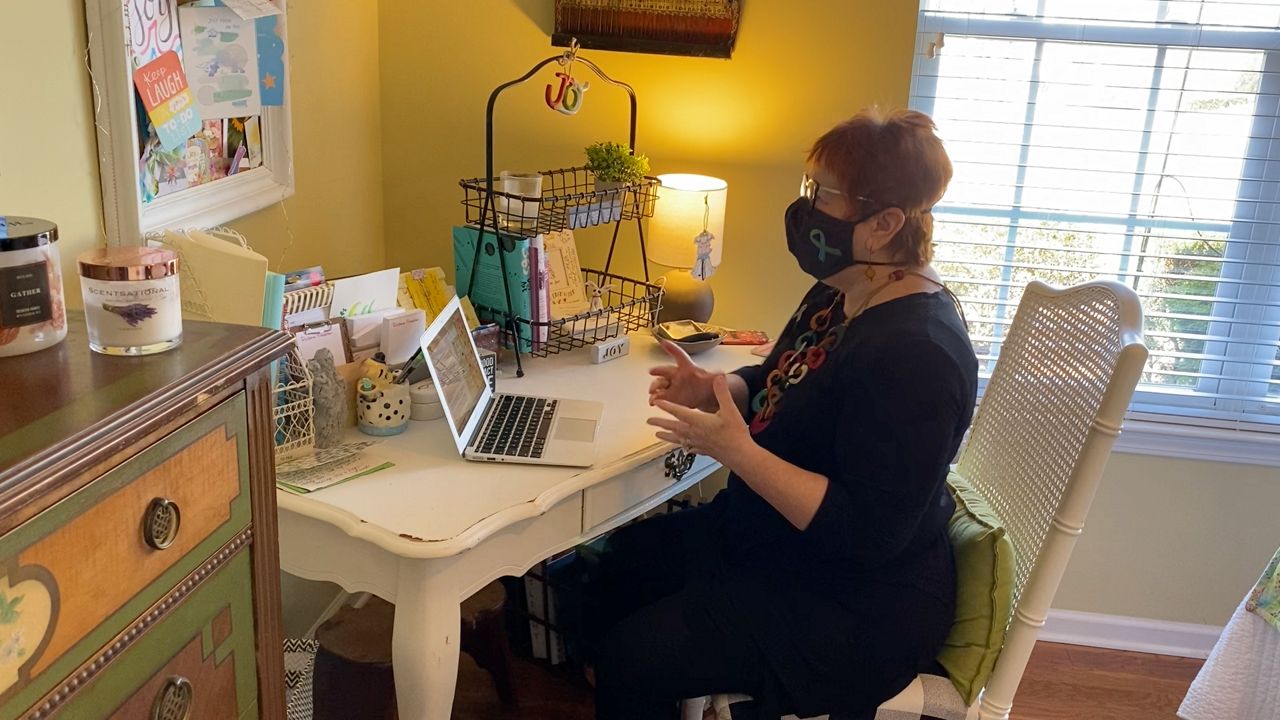 CHARLOTTE, N.C. — Two traditional rivals are joining forces, along with the Susan G. Komen Foundation, to try to put an end to metastatic breast cancer.

The grants will require collaborations between Duke and North Carolina’s research facilities, doctors, and resources.

The collaboration between the two research centers will be the first of its kind, according to the foundation.

The end goal is to put a stop to metastatic breast cancer, which can lower five year survival rates for breast cancer patients from 99% to 27%, according to the foundation.

The research grants, once applications are submitted this summer, could help women like Dar Finkelstein.

"In June of 2019, I woke up with a sharp pain across my chest,” Finkelstein recalls, while standing in her kitchen.

She’s taking a break from putting the finishing touches on a new video for her YouTube channel named, Choose to Live With Joy.

Her mission to help others find joy might surprise you, if you knew what Finkelstein is dealing with in her personal life.

The pain was the return of Finkelstein’s breast cancer. This time, the cancer had returned to her bones and is stage 4.

"It has no cure, it is a terminal disease and you have to, for however long your life span is, you have to be on treatment,” Finkelstein says simply.

However, she does not spend too much time thinking about it. She’s too busy.

Finkelstein runs Facebook and YouTube pages, produces and hosts a podcast segment, and manages a support group to help others find joy. Some of the pages are devoted to helping metastatic breast cancer patients find joy, others are hoping to help all of us find joy.

“I’ve decided after I’ve had my diagnosis of metastatic breast cancer, that I was going to have joy in my life and I was going to share that joy with other people,” Finkelstein says.

Some days, it’s harder to find joy than others.

Doctors are worried Finkelstein’s cancer is progressing, meaning she could have to switch treatments soon.

“There’s a huge wide variety of treatments now, because of research that’s happened in the past,” Finkelstein adds.

But the clock is always ticking. Finkelstein is concerned about switching treatments, since it can be expected each new treatment lasts a shorter time than the first one.

Susan G. Komen, Duke, and North Carolina are hoping to add more ammunition to the fight, or put a stop to it altogether.

A recent $500,000 donation from Blue Cross and Blue Shield of North Carolina brought them close to their goal of $1 million for metastatic breast cancer research grants.

The $500,000 from Blue Cross and Blue Shield of North Carolina will specifically go to fund research grants examining disparities between mortality rates in Black women compared to white women with metastatic breast cancer.

"These projects won’t look at prevention, they won’t look at treatments for all types of cancer. We are focused on metastatic breast cancer. The cancer that kills most women,” McDonnell says over a Zoom call.

McDonnell says the grant applications should come in this summer, with the first approvals and money sent out by the fall.

“All the money, first of all, has been generated in North Carolina for this initiative and then all the research, at least for the first year, must be spent on a project that is a collaborative project with investigators from both Duke and UNC working together,” McDonnell says with a smile, adding they’ll have to be old rivalries to the side.

The collaboration was the result of Development Director Pam Kohl, who McDonnell says came up with the idea at an event featuring experts from both Universities.

She took the idea and ran with it, setting a goal to raise $1 million and put it directly back into research based out of North Carolina, adds McDonnell.

The grant applications will be reviewed by the Komen Scientific Advisory Board.

At the end of the day, it’s giving Finkelstein a reason to hope.

"I made up my mind I was going to have a joyful life no matter how many months or years that I have left,” she says on her sunny back porch.

Donations are still being accepted and the MBC Collaborative Research Initiative hopes to continue into future years.