The new 26-mile Silver Line light rail route will go from Belmont at least to Matthews, through Uptown Charlotte. City officials say the Blue Line was a "success story" for economic development along the line. (AP Photo/Chuck Burton)

CHARLOTTE, N.C. — Once complete, the Silver Line light rail will take people from Belmont, in Gaston County, past the airport, through Uptown Charlotte and all the way out to Matthews. There’s discussion about even pushing the rail line out over the county line into Indian Trail.

Big public projects like a new light rail line take decades to complete. The plan for the Silver Line has been in the works since the 1990s, but the route is finally taking shape.

The idea for the new line has followed the same process as the Blue Line and the Gold Line through the planning, approval, and building process. The Silver Line would be the longest yet in the Charlotte Area Transit System’s Lynx light rail service.

After years of public input, planning, and analysis, planners are putting the final touches on the 26 miles of track. 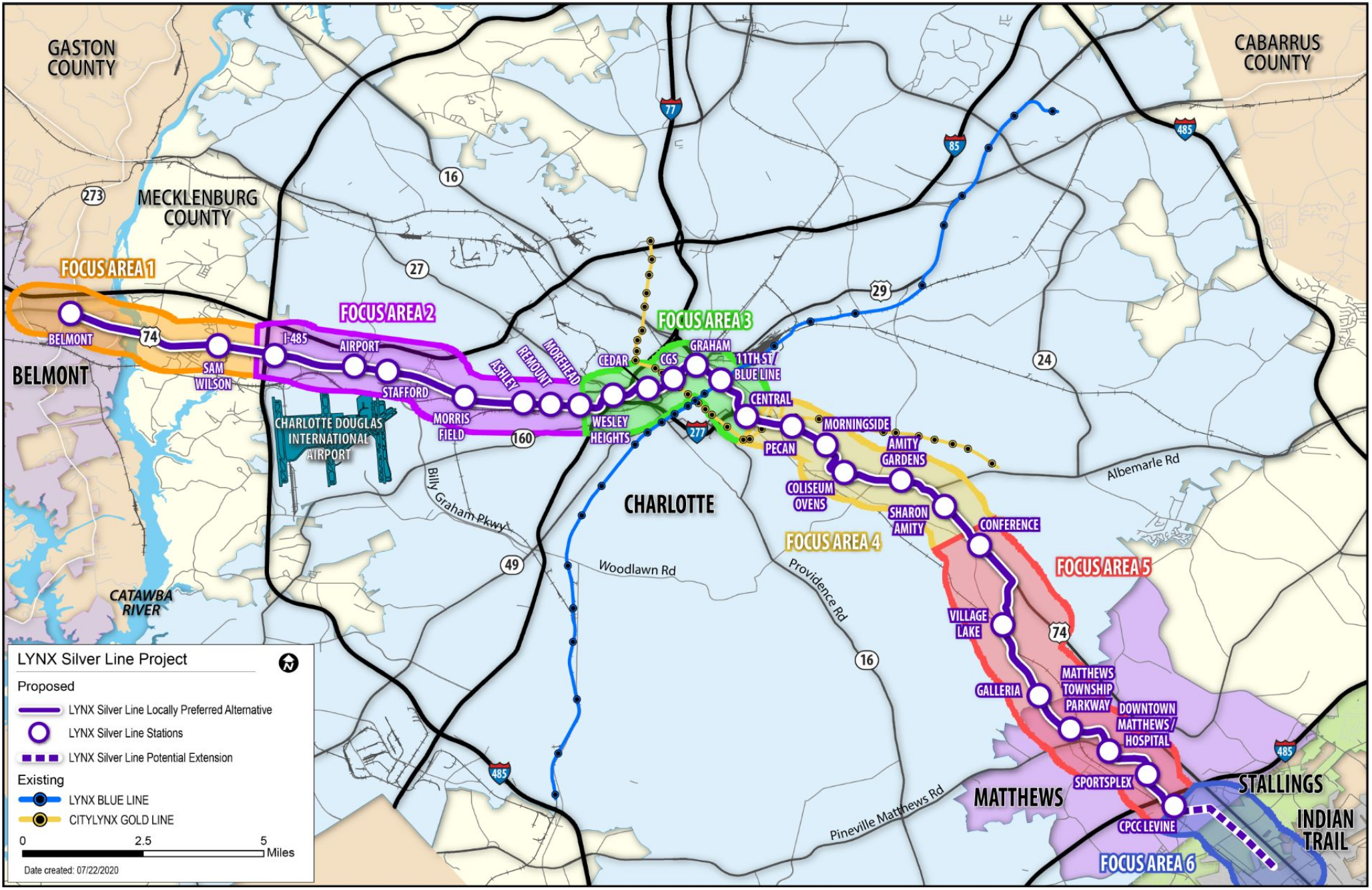 Transportation planners just finished presenting different options for public input to finalize how it will all work as they get down to the nitty gritty technical and engineering plans.

With the latest public comment period wrapped up, the officials with the city transit system will present the final plans for the line early next year.

If all goes on schedule, the Silver Line could be open in 2030.

“This is a huge, transformative project,” said Ajonelle Poole, spokeswoman for the Charlotte Area Transit System. It could have a serious impact on housing, travel options, and economic development along the rail corridor.

The Silver Line could bring more growth and development to the east and west of Charlotte much like the Blue Line has done in areas like the South End and NoDa.

“The Blue Line was a success story on what public transit can do,” Poole said.

22 years in the works

Starting in 1998, the City of Charlotte began looking at big ideas for public transit.

The city came up with a 25-year vision for the city that included using rapid transit like light rail in the city center and along major corridors out from the city.

That 1998 plan identified Wilkinson Boulevard and Independence Boulevard as two potential corridors for something like light rail.

Following up on that original vision, the city kicked off a four-year planning process in 2002, updating the ideas to create the 2030 plan for the Charlotte area transit system.

With the basic routes agreed on, planners with the Charlotte Area Transit System came up with a bunch of options for how the light rail will actually work as it passes through communities across Mecklenburg County.

The public got the opportunity to dig into these plans and give feedback this year. The final proposal for how the track will go from Gaston County in the west, possibly all the way over into Union County in the east, will be ready early next year.

The public will again get to check out the plans and give their input as the final route takes shape and engineers get down to figuring out all the details.