Traffic, Transit, and Security Information for the Republican National Convention

The following information was released by the USSS and includes road closures, restricted parking zones, local travel access information and checkpoints, and changes to public transportation. 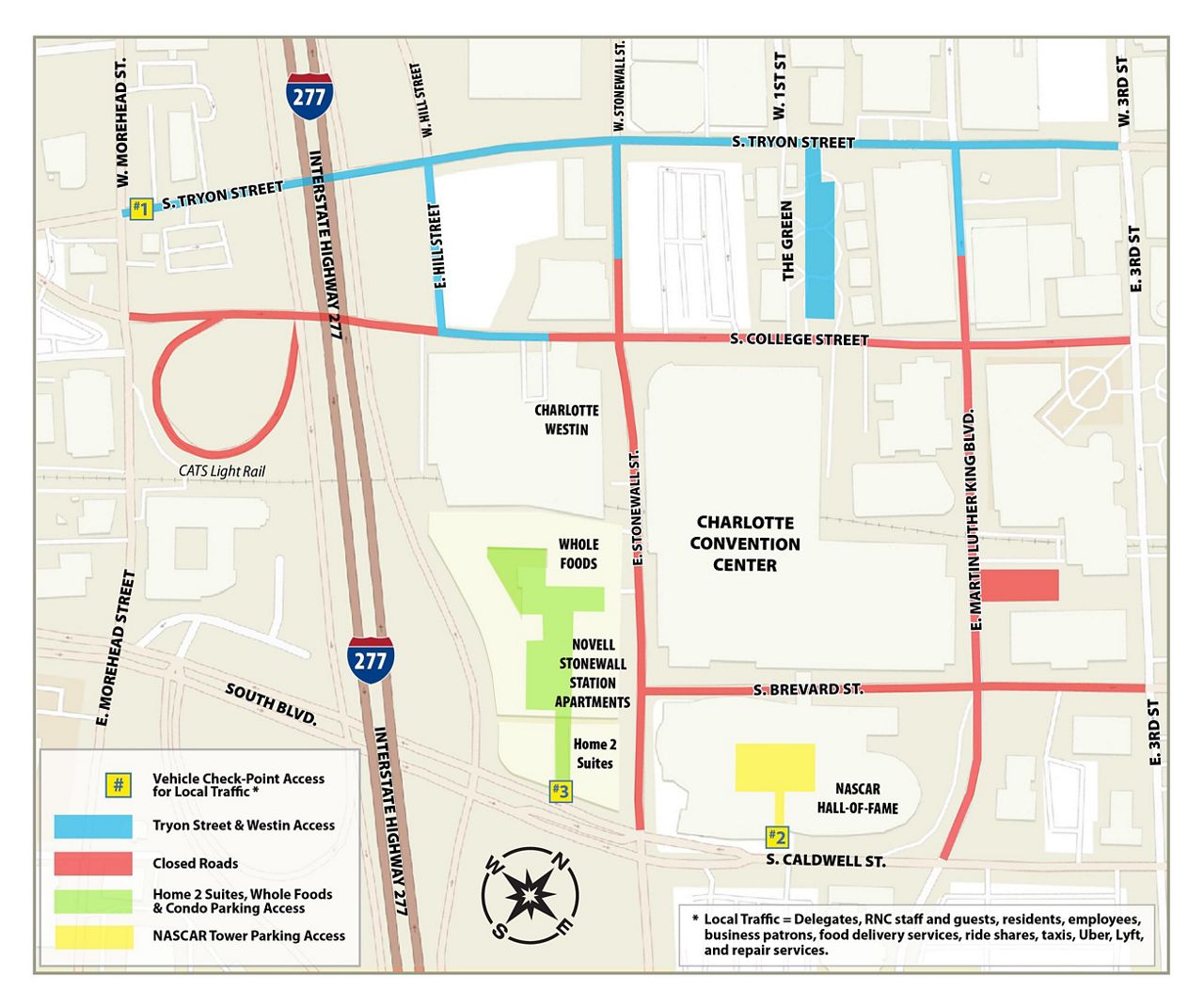 All road closure areas listed above and other affected areas will be posted with “Emergency No Parking” signage beginning on Friday, Aug. 21.  Missing vehicles can be confirmed as towed or stolen by calling the City 311 phone line or online. Vehicular parking restrictions will be coordinated and enforced by the CMPD and CDOT.

Beginning Weds, Aug 19, additional parking restrictions are necessary to secure downtown #Charlotte for #2020RNC. @CharlotteDOT, offers an interactive map for the @CLTgov community to stay up to date. To see the map: https://t.co/Ebg5v8Z3wh pic.twitter.com/SVIVRVZ66w

Beginning at 6 p.m. on Sunday, Aug. 23, three vehicular checkpoints will be established for all local traffic after being screened and searched. “Local Traffic” includes delegates, RNC staff and guests, residents, employees, business patrons, food delivery services, ride shares, taxis, Uber, Lyft, and repair services. All other vehicles will be turned away.  Businesses in the secure perimeter and area surrounding, if allowed by state COVID regulations, will remain open but have the option of voluntarily closing during the RNC. All exiting traffic should return to the same checkpoint used to enter.

Access to Tryon Street, the Westin Hotel, Regions Bank building (615 S. College Street) and parking garages on Stonewall Street (between Tryon and the Harvey Gantt Center), MLK Boulevard and “The Green” will be facilitated through this security checkpoint.  Businesses and eateries on “The Green” will be accessible by foot only from the S.Tryon Street sidewalk.

Access to the NASCAR Tower parking garage will be for tenants only.  Businesses in this area will be open if allowed by State COVID Regulations and will be accessible by foot as well.

Access to the Novel Stonewall Station Apartments for residents and guests and patrons of the Whole Foods Market, Home 2 Suites and related business in this location can access the parking garage from South Boulevard only.  All other vehicular access points will be closed.  Businesses in this area will be open and are accessible by foot from the intersection of S. Caldwell Street and E. Stonewall Street as well.

Due to the RNC, some bus routes are scheduled to detour on Sunday, August 23 - Monday, August 24, with detours ending on Aug. 25. CATS will continue to operate on the modified schedule implemented on June 8. Please find more information at https://t.co/zEkgUhGvEt. pic.twitter.com/YKdQLVadUw

Buses: No bus service will be allowed inside the secure perimeter. Please check the CATS website for additional route changes.

Airspace: An interagency airspace security plan will be implemented to provide secure airspace over the Charlotte metropolitan area. The Federal Aviation Administration (FAA) has designated the Charlotte Area as a “No Drone Zone” and will implement Temporary Flight Restrictions (TFRs) from 6 a.m. to 4 p.m. on Monday, Aug. 24.  The enhanced airspace restrictions can be accessed online. Pilots are advised to check Notices to Airmen (NOTAMs) frequently for possible changes prior to operating in the Charlotte area. Pilots are strongly advised to contact a Flight Service Station at (800) 992-7433 prior to flight to check for all current NOTAMs.

Reminder: No Drone Zone in Charlotte on Monday, August 24, 2020. https://t.co/mLDLWaxtUy

Officials say all security and transportation plans have been made in partnership with local, state, and federal agencies. Any additions or updates made prior to the start of the RNC in Charlotte can be found on Twitter at @RNC_Security.