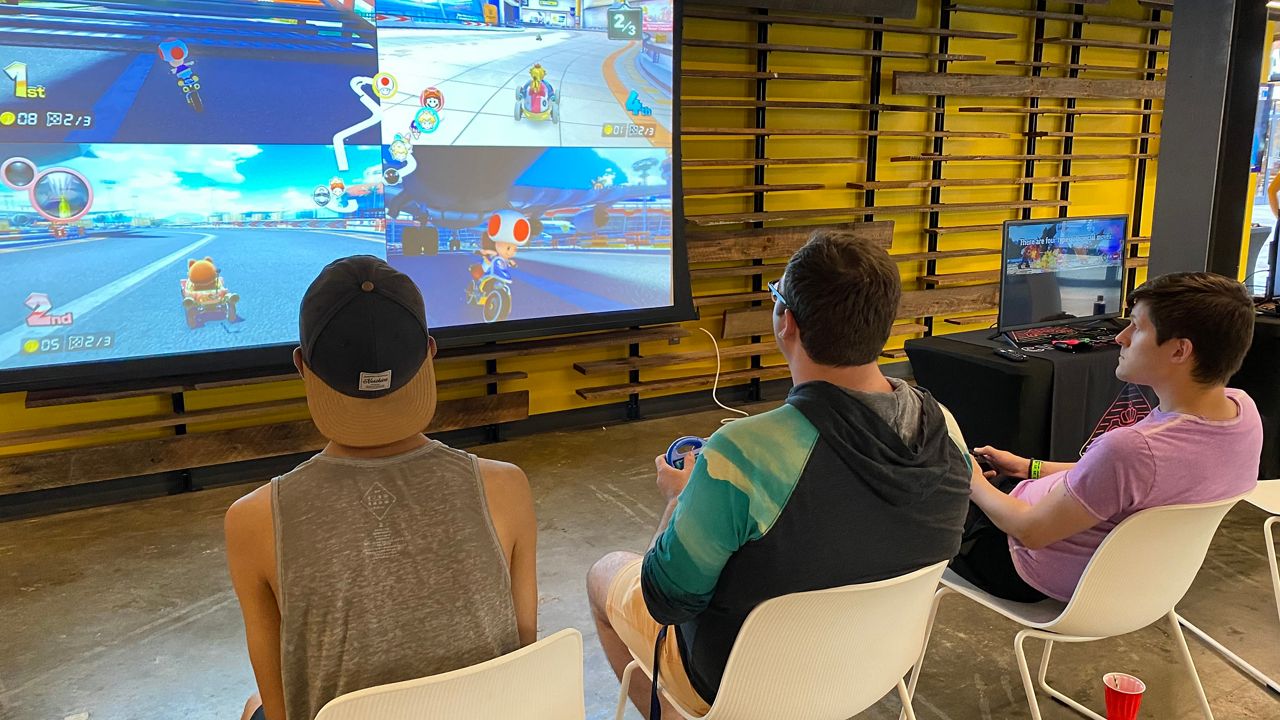 CHARLOTTE, N.C. — The organizers of a Charlotte gaming network say it is the first of its kind in the city, connecting members of the LGBTQ community for networking, friendships and business opportunities.

The Charlotte Gaymers Network is about to celebrate its first year in operation this July. What started as a weekly hobby for two friends has grown into a network of more than 700 gamers, meeting in-person and over social media.

One of the network’s co-founders, Jonathan Barrio, said video games have been in his life since he was young.

"I’ve been a gamer since I was about seven or eight years old,” Barrio said while showing off his video game set up in his Charlotte condo.

The large computer screens, whirring lights and hum of electronics make for an interesting office space.

"Zach [Smith] and myself also use these stations to run the organization,” Barrio said, referencing the two computer set-ups occupying a part of his living room.

As the coronavirus pandemic raged last summer, the two friends bonded over video games in a Facebook group with about 10 of their buddies. As Barrio and Zachary Smith, the network’s other co-founder, discussed their video game group, they realized an opportunity to expand.

"The more people that we brought into this, we saw that there was a lot of potential here for an actual organization based around gaming,” Barrio added.

From there, the Charlotte Gaymers Network was officially created in July 2020.

In one of the Network’s first Facebook posts they wrote, “We are an inclusive group of folks from all walks of life, here in Charlotte, who are united in our passion and love for all things gaming.”

Since their July post, the group grew to more than 700 members on Facebook and is ready to celebrate its first anniversary.

“Something that I think we see a lot of, in our community, is people having a hard time growing up at school. And, you know, for me growing up video games was an awesome escape from reality, being bullied,” Smith said.

As an adult, he wanted to take his experience with video games to the next level and help others make the same connections.

"Growing up, I really wanted to expand that feeling or connect with people who felt the same way, especially in the LGBTQ community,” he added.

So far, it is working.

At their most recent Friday night "gaymer gathering" in June, they had more than 100 people show up for free games, drinks and food.

Not to mention, the CGN+ membership option, $10 for an individual, which was meant to bring in about $4,000 to the organization over the course of this year has already almost doubled that amount as of early June. The membership is not required to join or participate in the Network’s events, which are free.

For Barrio and Smith, the moments and meetings at their gaymer gatherings are meant to serve a higher purpose.

"Folks meeting each other for the first time, folks finding romantic partners or just friends who share a common interest has been so rewarding,” Barrio said.

Barrio said he believes behind the pixels of a screen, video games are a great equalizer.

"Your class, your wealth, who you are doesn’t matter when you’re playing a video game and when you’re meeting somebody for the first time in that space,” he continued.

The gaymer gathering, held at Tabbris, was a mix of old school and newer generation gamers, enjoying a combination of consoles like the old school SNES to the newer PlayStation 4.

For Tabbris owner John Brock, the Charlotte Gaymers Network was exactly the kind of event hosts he was looking for, “That’s the entire purpose of something like Tabbris.” He continued, “Community-driven event, driving e-sports or entrepreneurship.”

Brock said it was encouraging to see the Network use his space over the last year and develop business relationships, friendships and even some connections to professional esports teams. The Charlotte Phoenix, an esports team based here, is one example of the opportunities available in videogames, which one day some CGN members might be able to take part.

At the end of the day, Brock said it is rewarding to see the kind of atmosphere the CGN has created. “Everyone’s freaking nice and happy.”

The Charlotte Gaymers Network also uses their equipment and resources to give back to the LGBTQ+ community here in Charlotte.

Earlier this month, they held an event with the Time Out Youth Center, which serves LGBTQ+ youth ages 11-20, on the anniversary of the Pulse night club shooting in Orlando.

Smith said they wanted to have a speaker come talk to the kids about the Pulse shooting and their feelings about it, while also incorporating the fun of video games and other entertainers.

"We want to show you that there are spaces for literally everyone to come in and hang out. So, I think really getting that out there in the community and finding niches of people who might feel misplaced and showing them, there’s a place to go,” Smith said.