The Historic Engine #12 sits in Downtown Sanford, North Carolina. Two Amtrak trains run through the city each day, but Sanford has not had passenger rail service for more than 50 years, the mayor-elect said Tuesday. (Photo: Charles Duncan)

Better rail service for North Carolina and the Southeast? State working on the ‘missing link’

SANFORD, N.C. — An Amtrak train bound for Raleigh passes through downtown Sanford twice a day. Freight trains rumble through the city several times each day. But Sanford, about 45 minutes southwest of Raleigh, hasn’t had passenger rail service for more than 50 years, according to the city's mayor-elect.

A new $3.4 million federal grant is paying to help communities like Sanford, Apex, Wake Forest and Norlina, plan and start designing new multi-modal hubs, including train stations that could connect to local public transit. The funding comes as part of a bigger project to bring better rail service across the South.

“The mobility hubs will be a place where residents can hop off the train and then catch a bus or walk to a local restaurant, or even bike to work,” said Joey Hopkins, chief operating officer with the North Carolina Department of Transportation. “We know that a good transportation system is the backbone to a strong economy.”

The hubs are part of a bigger project for rail in the Southeast called the S-line. This project plans to run new rail service from Sanford, northeast through Raleigh and up to Norlina, close to the Virginia border. 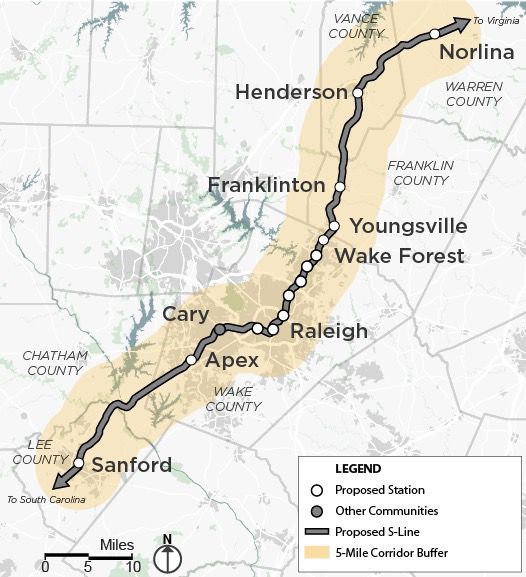 “This segment of the S-Line is a missing link within the larger vision for passenger rail service in the Southeast,” according to NCDOT.

The idea is the new Sanford-Norlina line will connect to other regional and national rail lines, including the Piedmont line that runs from Raleigh to Charlotte, the new high-speed rail line planned to run from Raleigh to Washington D.C., and other Amtrak lines that take passengers around the country.

“These hubs will provide multi-modal connections in each community. They will serve as an entry point and ensure vibrant and thriving communities for future generations,” Hopkins said. He joined city officials outside Sanford’s Historic Railroad House, a museum dedicated to the area's train history.

Sanford is, in fact, named for Colonel C.O. Sanford, a famous railroad engineer from the late 19th century when the city was incorporated. The city was founded at the intersection of two important rail lines in Lee County.

“This is a community-defining project,” Sanford mayor-elect Rebecca Wyhof Salmon said. “Twice a day, Amtrak runs through our community without stopping. And I used to get asked all the time: why can’t Sanford have a stop?”

“Now I get asked when our community rail service will begin,” she said, standing outside by the historic steam engine #12 in Downtown Sanford.

“It will take vision and hard work from all of you here to make this a reality,” she said, talking to her fellow city leaders and NCDOT staff assembled Tuesday morning.

Rail projects take decades to plan, design and build. They involve planning and coordinating between the federal government, several states and numerous local governments along the route.

People in Sanford or Norlina won’t be able to hop on a train next month, even next year. But the process is moving along.

The latest round of funding came from the Bipartisan Infrastructure Law, a massive spending plan passed by Congress earlier this year. It includes money for other transit projects in North Carolina, including $12 million for a new bus maintenance facility in Cary, $18 million for a new port facility in Wilmington and money to rebuild 28 bridges in western North Carolina.

The new federal grant for the S-line gives money to the state and communities along the route to finish up planning and environment studies, and get started on designing the new train stations and “mobility hubs,” said Ryan Brumfield, with NCDOT.

But, he said, they are still trying to figure out exactly what train service along the S-line will look like.