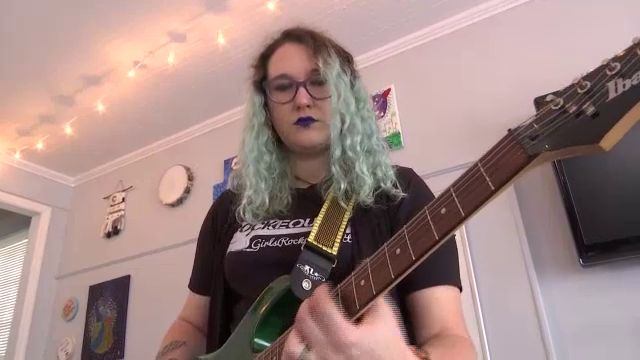 INDIAN TRAIL, N.C. -- It might be hard to tell but there was a time when Krystle Baller described herself as shy.

Music is where she found her escape, but early on she only flirted with it. When she joined an all-boys band she didn't know what to do.

“I just wanted to disappear and I didn't want to be seen. I was self-conscious already coming into it and they were loud and played over top each other and I just kind of blended in with it a little bit,” said Baller.

That may have been the moment that sparked what she does today. Baller is a music instructor, but she has a specific focus. While people like Bruce Springsteen and Elton John are household names, it's hard to think of many female rock musicians.

Baller wants to flip the switch. “Girls inherently have their volume turned down. I want kids to be able to see a woman who plays drums, plays guitar, I play all the instruments for them... there won't be this taboo thing that happens, you're a girl and you play drums, cool. It's just like yeah, you're a drummer,” she said.

She works with Girls Rock Charlotte, where in a matter of a week, girls form a band, write an original song, and then perform it in a large concert. But she also targets kids who are a little younger. Baller teaches something called Baby Punk for infants to six-year-olds. It's not a class where you'll hear "Itsy Bitsy Spider." ​

“The structure of baby punk is controlled chaos. If you have a kid that wants to wow out, wants to be loud, and can't sit through story time, maybe this is the spot you should bring them,” she said.  Finding that spot is what Baller strives for.​

Everyday Hero Krystle Baller is making sure that space is a little easier to find for those who might be a little hesitant to take the stage. For more information on her business, click here.