A bill at the General Assembly would force polluters to pay to clean up PFAS contamination, including the GenX contamination in the Cape Fear River. (Photo: Charles Duncan).

5 things to know: What are PFAS and what is North Carolina doing about the pollution?

WILMINGTON, N.C. — A new bipartisan bill in the General Assembly would give state regulators the power to go after polluters of “forever chemicals” and make them pay for cleaning drinking water and cleaning up contamination.

North Carolina Gov. Roy Cooper and Department of Environmental Quality Secretary Elizabeth Biser stood on the bank of the Cape Fear River in Wilmington on Tuesday to ask the General Assembly to pass the bill that would hold companies liable for PFAS pollution. 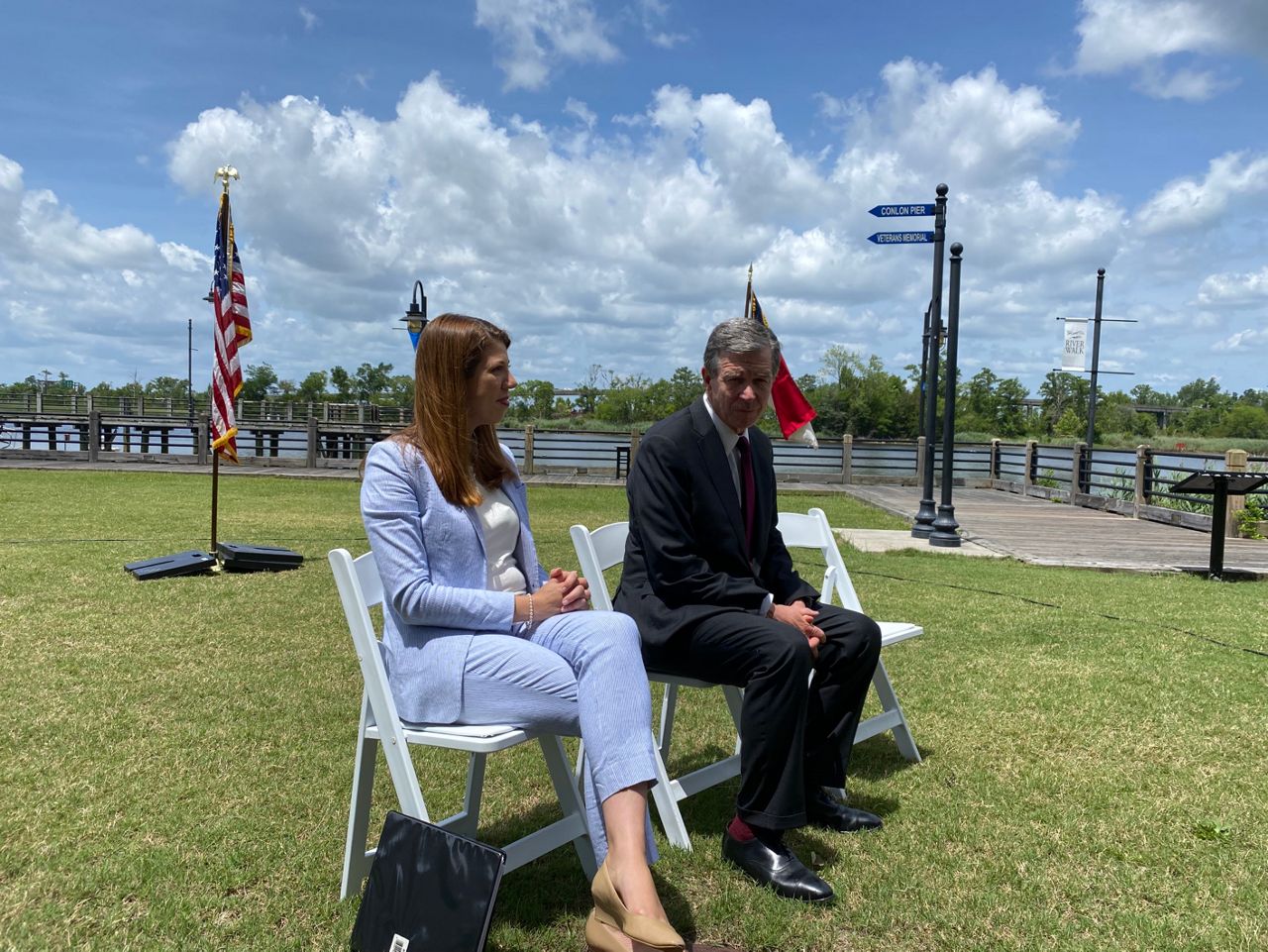 “Families and communities deserve clean water,” Cooper said. “They deserve to have confidence when they turn on the tap.”

“When a business pollutes the water, we must act to stop the damage and set things right,” he said.

PFAS chemicals are an issue across North Carolina and around the country, Biser said.

“We know that the issue of PFAS is larger than one compound or one company,” she said. But North Carolina has been in the lead addressing the issues with these chemicals.

This corner of North Carolina made national headlines when researchers figured out how much GenX, a PFAS chemical, made it into the drinking water in Wilmington and surrounding communities.

Environmental regulators traced the contamination back to the Chemours plant up the Cape Fear River in Fayetteville. But it has fallen to communities in southeast North Carolina to make sure they have clean water by buying bottled water, installing water filters in homes and upgrading water treatment plans.

“We know the ratepayers of New Hanover and Brunswick counties are paying more every month,” Biser said.

Per- and polyfluoroalkyl substances, known as PFAS, are frequently called “forever chemicals” because they do not degrade in the environment.

They’re man-made chemicals that are used for things like nonstick pans, stain-resistant clothes and carpets and firefighting foam, according to the EPA.

The chemicals are found in all kinds of everyday items like microwave popcorn bags, takeout containers and food wrappers.

PFAS are not found naturally in the environment, but they show up near where they’re used, such as where firefighters train with foam spray, or where they’re manufactured, like the Chemours plant on the Cape Fear River, according to DHHS.

There are thousands of different PFAS chemicals, but there are 10 to 15 of top concern in North Carolina, Biser said. The chemicals make their way into drinking water supplies and then into the human body.

What does it do to humans?

Researchers are still studying what PFAS do to humans and how it affects health. The chemicals can increase the risk that people get some types of cancer, according to DHHS. They may also impact behavior, learning and growth in babies and children, interfere with a person’s hormones, increase cholesterol and affect the immune system, research shows.

“Whether or not you develop health problems after being exposed to PFAS depends on how much, how often, and for how long you are exposed, as well as which PFAS you are exposed to,” according to DHHS. “Personal factors including age, lifestyle, and overall health can impact your body's ability to respond to chemical exposures.”

Where is there PFAS contamination in North Carolina?

Scientists have found PFAS contamination all around the state, Biser said. But there is particular concern for the Lower Cape Fear River, downstream from the Chemours plant in Fayetteville that manufactured a chemical called GenX.

State environmental officials found GenX in the drinking water downstream of the plant and in private wells around the facility.

There’s also concern about PFAS contamination in Greensboro, according to DHHS. The city said the contamination was likely coming from Piedmont Triad International Airport and the surrounding industrial area.

“It was determined that a significant contributor was use of PFOS-containing firefighting foam for training and emergency response activities,” according to the city. PFOS is another PFAS chemical.

A third hotspot is on the coast, near the community of Atlantic and the neighboring Marine Corps airport, according to DHHS. The contamination there likely came from firefighting foam, according to the Navy.

What is the state doing about PFAS?

The state has been at the forefront of research into PFAS contamination and how to respond, environmentalists say. State scientists and other researchers have been testing water around North Carolina to find hotspots and working to clean up the contamination.

Under the Trump administration, the Environmental Protection Agency was mum on the issues with PFAS contamination. But under the Biden administration the EPA is now working to help study PFAS and make new rules for the chemicals.

The current EPA Administrator Michael Regan is the former head of North Carolina DEQ and was on the frontlines of the GenX response in the Wilmington area before moving to Washington, D.C.

On Tuesday, Biser announced a new PFAS action plan for North Carolina. The strategy, she said, has three parts: First, the state is working to identify and alert residents with PFAS chemicals in their drinking water and a system of statewide reporting.

The second part is to protect drinking water by setting enforceable PFAS standards for water and implement those new standards with a permitting program.

The third part of the strategy is to continue the state’s focus on cleanup and remediation of polluted sites, Biser said.

“We want to ensure in the future no community experiences what you have been through,” she said Tuesday in Wilmington.

But, Biser said, she needs more tools from the state’s elected leaders to hold polluters accountable for PFAS contamination.

What about the General Assembly?

There’s a bill before the North Carolina General Assembly now that would give state regulators the power to go after polluters to pay for PFAS cleanup. The bill, titled PFAS Pollution and Polluter Liability, was filed by a bipartisan group of legislators in the state House.

The bill would allow the state to set maximum contamination levels for PFAS in drinking water. It would give the DEQ secretary the power to order a polluter to pay for cleanup costs and the costs associated with cleaning PFAS in public water systems.

The legislation would also put $2 million in one-time funds toward implementing the new system to hold polluters accountable and pay for University of North Carolina System researchers to study the pollution and give analysis.

“Those who polluted the water should pay to clean it up,” Cooper said. “That’s an important part of what this legislation will do.”

Clarification: This article has been updated to reflect that Michael Regan is the current administrator of the EPA.