WATCH NOWExploring Your Health with Erin Billups
NEW PODCAST EPISODEThe Mayberry Effect: How ‘The Andy Griffith Show’ continues to impact us today
COMMUNITY CALENDARAdd An Event to Our Calendar
GET OUR NEW APPOur new Spectrum News app is the most convenient way to get the stories that matter to you. Download it here.

Protesters gathered outside the Gaston County school board, near Charlotte, before a vote on masks in schools. The board voted to make masks optional for students and staff. (Photo: Charles Duncan)

Most students around the country are getting ready to head back to school. Some haven’t been in an actual classroom in a year or more.

Things were looking good at the beginning of the summer, with coronavirus case numbers dropping and many people lining up to get vaccines. But things have changed. The vaccination campaign has seemingly stalled out in many states and COVID-19 case numbers are on the rise again as the delta variant spreads across the county.

The delta variant is much more contagious. Speaking to the Wake County school board this week, which includes Raleigh, North Carolina, and the surrounding area, Duke University pediatrician Dr. Danny Benjamin compared the rate of infections from the new variant to chicken pox.

Instead of the chicken pox parties of a certain generation, Benjamin said schools filled with unvaccinated, unmasked kids could turn into COVID parties.

Benjamin is part of Duke’s ABC Science Collaborative, which has been researching how to keep kids safe in schools. For Benjamin and the other doctors and researchers on the project, keeping kids, teachers and staff safe comes down to one word: masks.

The results of the research line up with guidelines coming from the Centers for Disease Control and Prevention and many state public health departments are saying: everyone should be wearing a mask indoors from kindergarten through high school.

“The prevention of transmission all centers around masking universally across the district,” Benjamin said Wednesday in a separate call with reporters. 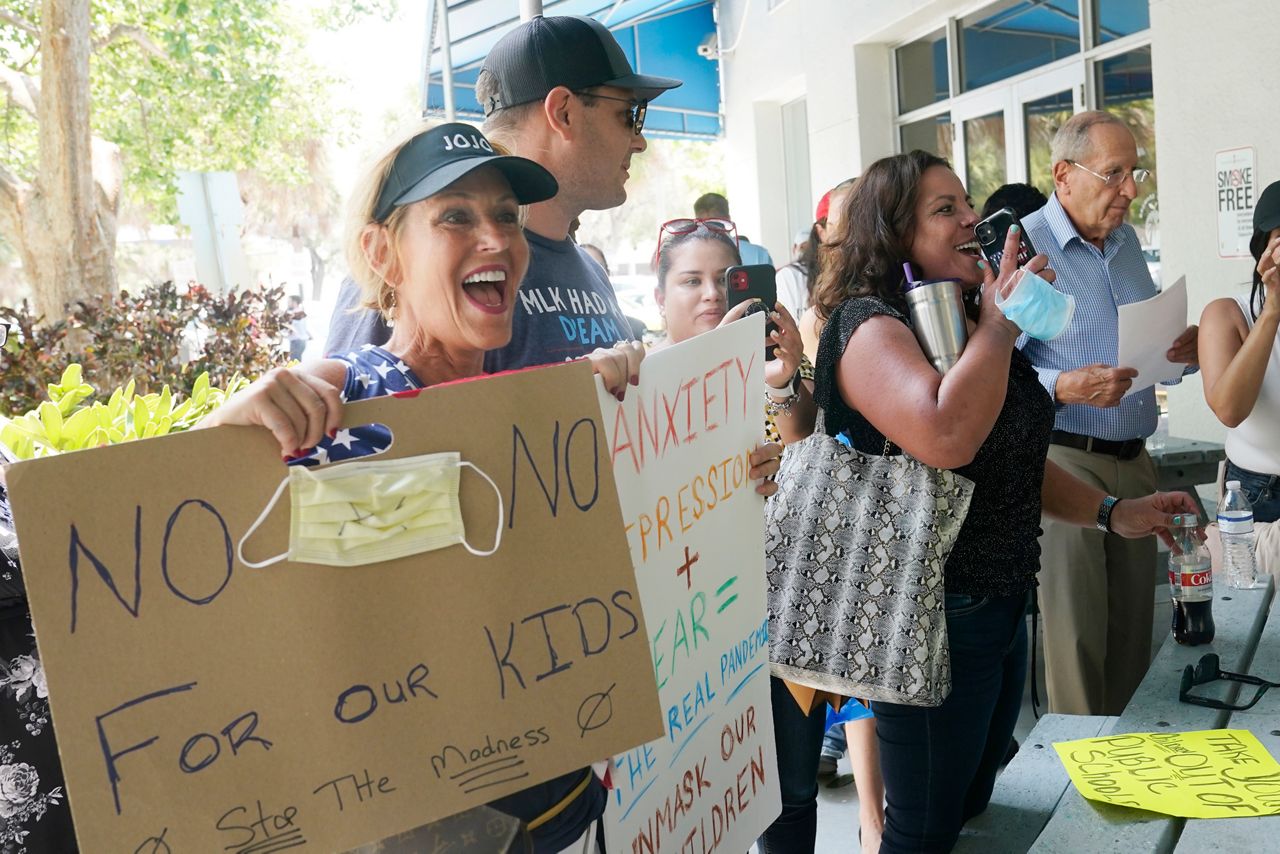 Joann Marcus of Fort Lauderdale, left, cheers as she listens to the Broward School Board's emergency meeting, Wednesday, July 28, 2021, in Fort Lauderdale, Fla. A small but vocal group spoke vehemently against masks, saying their personal rights were being eroded and their children were suffering socially. (AP Photo: Marta Lavandier)

Wake County, N.C. did vote to require masks in the classroom this week. But making a rule for students and staff to wear their masks is just the first step.

“Schools that are successful in doing this are monitoring their masking rates, are watching people come through, are reporting that and being very transparent about what’s happening in their schools,” said Dr. Kanecia Zimmerman, another pediatrician at Duke studying school safety.

“The simplest way to think about it is, a mask policy is only as good as the enforcement,” Benjamin said.

The researchers looked at how the coronavirus spreads in schools and how different approaches worked to keep kids safe. One thing that didn’t work: social distancing.

“We saw no difference,” Zimmerman said. But, she said, this is in an environment where everyone was wearing a face mask in classrooms and on the bus.

The question of whether or not to require masks in schools has kicked off divisive debates around the country. For the most part, it’s up to local school districts to decide.

North Carolina’s governor left it up to the state’s 116 school districts to decide on masks in the classroom.

In South Carolina, the governor recently signed a law saying local districts were not allowed to require face masks in schools.

Masks and vaccines have become a cultural and political flashpoint. In North Carolina, and around the country, areas that lean Republican are much less likely to require masks in schools. They’re also areas where, generally, vaccination rates are lower.

As school boards meet this summer, with just weeks before schools start, they’ve been met by parents and other protesters holding signs on both sides of the mask debate.

“People whose job it is to keep you alive encourage masking. People who are running for reelection have very mixed opinions about whether or not there should be masking,” Benjamin said.

For kids, the biggest influence over how they feel about masks is what their parents think, Duke psychiatrist Robin Gurwitch said.

“If parents are saying, ‘This is why we’re doing it, this is for our safety,’ then children are much more comfortable with it. When parents are getting, ‘Oh this is horrible, if you have to wear a mask it’s going to create breathing problems, you’re not going to be able to learn,’ then that’s where children’s messages are going to be,” she said.

Gurwitch said there is no evidence that face masks cause emotional problems for kids.

For many doctors and school districts, the biggest driver for requiring masks is keeping kids in the classroom. In North Carolina, for example, students won’t have to quarantine if they’re wearing a mask and exposed to someone who is also masked that has the coronavirus. But without masks, students would have to miss school for two weeks in quarantine. Benjamin even warned that entire schools could have to shut down completely if they get a big outbreak.

Those arguments have fallen flat in many school districts around the United States and students will go back to school without masks, even as case numbers continue to go up.

“For schools that elect not to mask, best of luck with that,” Benjamin said.