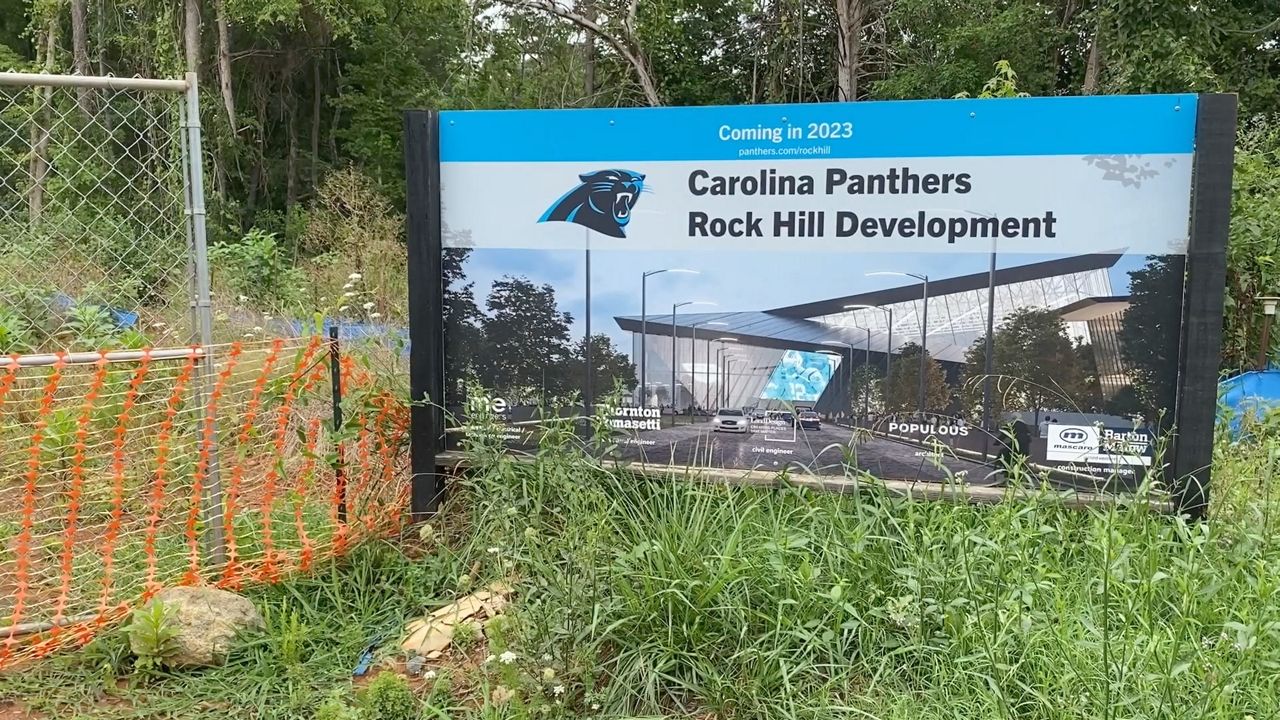 The project, which is incomplete, came to a halt in March of this year, before being canceled in April, according to Spectrum News 1’s previous reporting and a lawsuit filed by York County.

Originally, the Rock Hill site just a short distance from I-77 was going to be the home of the Carolina Panthers’ practice facility and other offices, with plans to turn it into a regional tourism attraction for sports fans.

The county’s lawsuit names three of Tepper’s companies and the City of Rock Hill, claiming they damaged the county’s taxpayers.

In summary, the lawsuit alleges $21 million of county penny tax funds meant for road work instead funded other aspects of the project.

With the fight continuing in court and the project dead, a bowling business owner in Rock Hill said he was disappointed the deal fell through. But, he and his wife said they were not necessarily worried it would negatively impact the business.

Lisa and Greg Perkins own Strikers Family Sports Center in Rock Hill, just a few miles from the abandoned practice facility. Along with their daughter, the family has owned and operated the bowling alley since 2015, long before the Panthers were set to come to town.

“It’s a good business, and it’s something I know how to do and you know this was a good bowling center, I was already familiar with it,” said Greg Perkins about his interest in taking over the spot.

The bowling alley is usually busy with leagues, parties and other events. Perkins said if the Panthers had come to town as planned, however, it only would have helped.

“Rock Hill’s growing anyway, but I think this would’ve brought in more new business, it would’ve been good for everybody,” Greg Perkins added.

Perkins said since the project never finished, it is impossible to know how much it would have helped, or how much the empty building will hurt.

“I think it’ll be the same because it never was open, other than there was construction going on. But, we didn’t see an uptick from it. But, just a little bit [of] disappointment that it’s not going to happen,” Greg Perkins said in his bowling alley shortly after opening for the day.

If the practice facility had opened as planned, Perkins guessed they likely would have benefited from local youth sports teams using the facility and then booking events at the bowling alley. And, as a sports fan himself, he said he’s bummed they will not be nearby.

Earlier this year, other Rock Hill businesses, like Wild Wing Cafe on John Ross Parkway and Helen’s Hot Chick on Mount Gallant Road, said they opened in the area because of the facility.

Back in Charlotte, Tepper's other sports team, Major League Soccer's Charlotte Football Club, caused a stir when it announced it would no longer be a part of the long awaited Eastland Mall site revitalization. Originally, Charlotte FC planned to have its practice facility, team academy and other offices at the old Eastland Mall site.

In July, Tepper Sports and Entertainment announced in a short statement it was no longer planning to build at the site, saying the project's timeline would take too long.

"After a great deal of consideration, the timeline for the Eastland project posed challenges that led us to research expedited alternatives. We continue to work towards a practice facility for Charlotte FC’s first team, the club’s academy and its MLS Next Pro team and will provide updates as our plans are finalized. We continue to have discussions with the City of Charlotte as we work towards driving economic engagement through sports and live entertainment," a Tepper Sports and Entertainment spokesperson wrote in an email to Spectrum News 1.

The decision marked the second time in four months a Tepper-controlled team opted out of a local construction project. At the Eastland groundbreaking on Wednesday, one of Charlotte's city council members defended David Tepper and thanked him for what he's brought to the city.

“It’s very easy in this community to be a Monday morning quarterback and look at very complicated, long term strategic visions, that are still in their infancy, and critique them. But, I will tell you with absolute certainty, we have an organization and a leader in our community that has invested in our community already,” said District 6 Councilman Tariq Bokhari. “That has invested in our football team, that has brought us a professional soccer franchise. And whether it worked out in the beginning with the original plans or not, had a large part for the reason we’re all able to stand here today at this milestone.”

It's unclear what will happen to the incomplete facility in Rock Hill or the remaining, now unplanned 20 acres of the Eastland site redevelopment.