The University of Hawaii beach volleyball team has been consistently competitive spanning the leadership of Jeff Hall and Angelica Ljungqvist, and now will look to do the same under former assistant Evan Silberstein.

Silberstein served with the program for the last seven seasons – going back to when the sport was called sand volleyball and wasn’t yet sanctioned by the NCAA. Before the COVID pandemic, UH competed in the national championships at Gulf Shores, Ala., on a near-annual basis.

“A sense of tradition, a sense of pride for the level of success that we’ve had already is a big piece for me,” Silberstein told local media ahead of Friday’s 2022 season-opening event at Queen’s Beach. “Definitely continuing to be athletes that are coveted and are held up in the community. I want to bring notoriety to the program, not only on the national circuit but also locally – something everybody can be proud of in Hawaii.”

UH returns about a dozen players from its squad that went 17-10 and finished with a ranking of No. 13. It lost to Cal Poly in the Big West championships and, in a rarity, missed out on the trip to Gulf Shores.

UH, ranked No. 10 in the AVCA preseason poll, opens the 2022 season on Friday and Saturday with the Heineken Duke Kahanamoku Beach Classic. It will be the BeachBows’ first competition at Queen’s Beach in two years after playing all its 2021 home matches at the on-campus Clarence T.C. Ching Athletics Complex sand courts due to the pandemic.

Pairings have not been revealed, but UH’s duo of Sofia Russo and Anna Maidment are back after going a team-best 16-5 last year. Other additions include Gonzaga graduate transfer Sarah Penner and Pepperdine transfer Calista Wright.

The UH indoor volleyball players to make the crossover this year are Van Sickle, who is completing her six-year collegiate career, and sophomore Riley Wagoner. 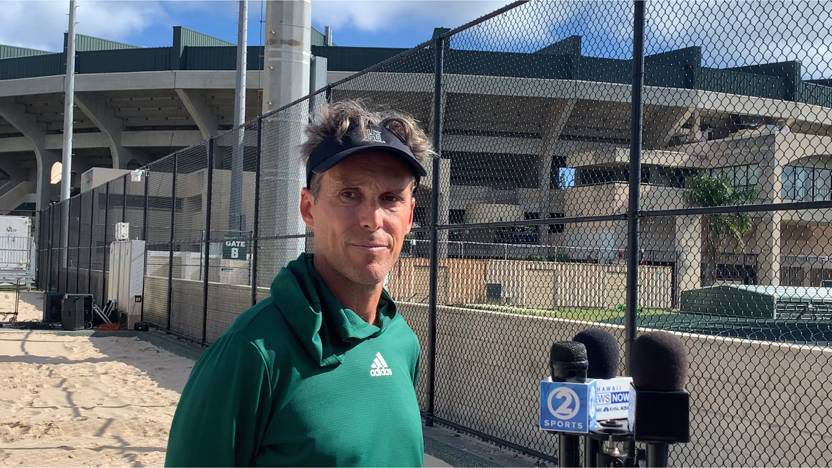 Silberstein’s assuming of the reins comes as the NCAA is expanding the beach postseason field from eight to 16 teams as the sport continues to grow; 86 NCAA members now field a team.

Hall was released by the university in a cost-saving measure at the outset of the pandemic in 2020. Ljungqvist left both the UH indoor and beach volleyball teams in July 2021, citing a need to be closer to her family in Sweden.

“It’s an exciting responsibility for me,” Silberstein said. “Because of the nature of the position … split between the programs (beach and indoor), I think I took a lot of responsibility as an assistant to really handle a lot of those things. And then when big decisions came, I’d be in the room often with Jeff or Angelica helping them to make those decisions. So, most elements of the program I’m really familiar with. It’s exciting, maybe a little nervous sometimes to make those decisions..."

“I love Evan. Now that he’s the head coach, he’s definitely implementing a lot,” Van Sickle said. “He has more team talks. He knows how to run practice really well. He’s incorporating a lot of stats now; we didn’t do that in the past. … It’s really helpful to look at.”

Silberstein thinks that a 50% team rate on first-ball kills – when the receiving team puts the point away on its first bump, set and spike opportunity – will be the mark required to contend for a national title.

“We’re using the metrics and analytics as one more tool to get us to where we need to be,” Silberstein said.

Meanwhile, the change of site to the edge of Waikiki for two of three of the season’s home events is no small thing. The sand is deeper at Queen’s compared to the harder-packed Ching courts, making leaps at the net more challenging, which leads to longer rallies.

“It’s really hard to move. The coaches always say you’ve gotta keep taking extra steps when you’re at Queen’s,” Van Sickle said with a laugh. “There’s a lot of sand sharks, so when you try to jump, you kind of don’t jump, you just fall.”

Visiting teams are No. 2 UCLA, No. 7 Stanford and Saint Mary’s. The four teams will play a round-robin format from 8 a.m. to about 4 p.m. Friday, and from 8 a.m. to noon Saturday. Then they will compete in a championship bracket Saturday afternoon.