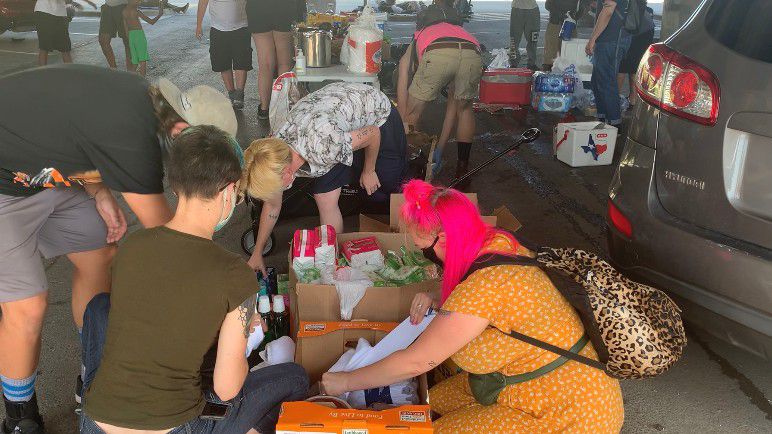 Volunteers hand out food and other items to people experiencing homelessness at the underpass located near 8th Street in Austin, Texas. (Kathryn Gisi/Spectrum News)

AUSTIN, Texas — It's been said that tradition never dies, and that is absolutely true for a group of Austin volunteers. They're carrying on the Garrett Foster's tradition of feeding the city's homeless every Wednesday evening across the street from Austin Police Department headquarters.

Foster was shot and killed at a police brutality protest last month, but his friends and fellow protesters are picking up where he left off.

“People expect us to be here. So, we can’t let him down,"said Mena.

People experiencing homelessness congregate under the overpass near 8th Street. They say they're appreciative of the donations. Up for grabs is both hot and cold food, socks and toiletries.

“Everything shut down, and we we're scared. We were dying out here. So yeah, we’re very appreciative right now. Very appreciative,” said Nikki Aurit, who has been experiencing homelessness for the last five months.

Mena says Foster would be proud to know that volunteers are keeping his work alive after his death.

“He didn’t do this for popularity or anything, he did this out of the goodness of his heart. Because he saw people who needed help, and he helped them," said Mena.