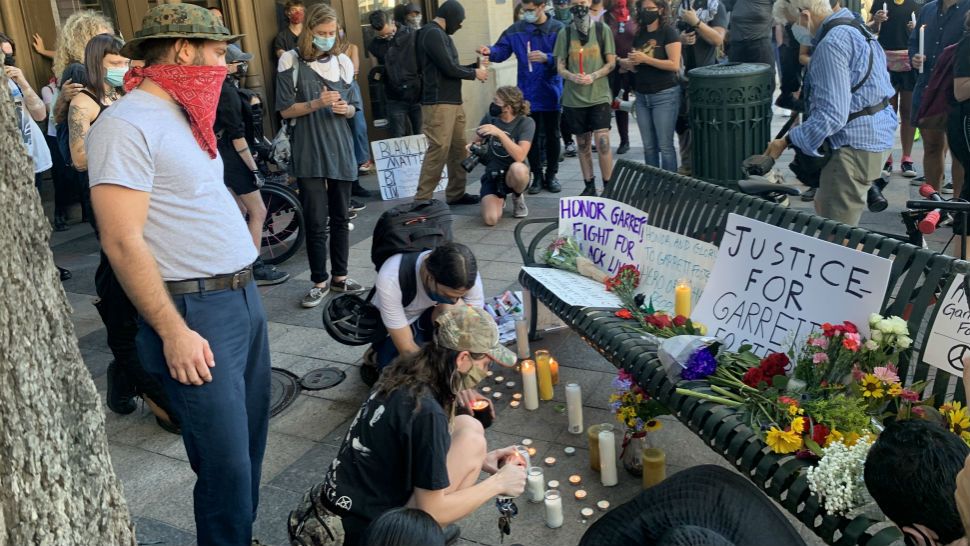 People gather around a memorial for Garrett Foster, who was shot and killed suring a protest on July 25. (Niki Griswold/Spectrum News)

AUSTIN, Texas — The family and friends of Garrett Foster want justice for the 28-year-old who was shot and killed by a driver during a protest over the weekend in downtown Austin, but whether they'll get it is still uncertain.


Attorney Milo Colton, who is also a criminal law professor at St. Mary’s University in San Antonio, said that’s due to the state’s gun laws.

“Under Texas law about the only thing you have to do is show you had a right to be present at a particular place with your gun, and then that you felt reasonably threatened," said Colton.

RELATED: Man Dies in Shooting at Protest in Downtown Austin

Foster was killed July 25 when a car drove into a crowd of protesters, upsetting the group. Foster was openly carrying an AK-47 style rifle, which is legal in Texas. When he approached the driver's window, the driver rolled it down before shooting and killing Foster. The car then sped off and a bystander in the crowd fired his or her gun at the car.

Both the shooters had concealed weapons permits and were interviewed by police and later released pending the ongoing investigation. The driver told police Foster aimed the weapon directly at him, but witnesses say that’s not true.

However, Colton says that might not matter, as long as the driver says he was acting in self-defense.

“If he’s frightened, you’re going to have a guy pulling a gun and shooting. We’ve had people shoot for a lot less here in the state of Texas," said Colton. "And it’s very difficult for a prosecutor to win these self defense cases of this kind, it’s less than one percent in the state of Texas.”

That’s because of Texas gun laws including the Castle Doctrine and Stand Your Ground.

“By 1995, the Castle Doctrine was well established by the legislature, which essentially said if a homeowner felt threatened or somebody on their property felt threatened, they can use a gun to defend themselves," said Colton. "I think it was about 2007 that the Stand Your Ground law went into effect, and you didn’t have to be on your property to use the self-defense logic to shoot another person.”

Witnesses argue that the driver instigated the situation by deliberately driving into the crowd of protesters. Colton says the possibility of bringing the case to court is up in the air.

“That’s going to be very hard to prove. The question is who provoked whom and the question is does he have a right to be in his vehicle in that location?" said Colton.

“Texans support people’s right to stand their ground. You’re setting yourself up if you have a gun, to take on anybody," said Colton. "It’s just a very difficult situation in a heavily crowded gun culture.”

Spectrum News reached out to the Travis County District Attorney's office for a statement on the case and an update on whether charges would be filed, but a spokesperson said the office could not comment due to the Austin Police Department's ongoing investigation.