A statue of Confederate General JEB Stuart is removed in Richmond, Virginia. (AP)

A Push to Remember Statues We’d Like to Forget

As monuments toppled in the old capital of the Confederacy, a self-described rogue group of historians was trying to come up with a plan.

Bronze statues of the architects of white supremacist secession were tumbling along Monument Avenue in Richmond, Virginia, either by protesters or by emergency mayoral order.

After they are hauled away to an unknown destination; after cheers from the crowd and reproach from President Trump, were these monuments that dominated public spaces for a century ever to be talked about again?

Or would what remained be so much an apparition, holes along Monument Avenue?

That’s what worries some historians in Richmond, who say it’s important to remember things you may like to forget.

“You could take down all the Confederate memorials but it wouldn't resolve racism,” said Harriet Senie, a professor at City University of New York and a scholar of public memorials, who first alerted me to the Richmond rogue historians. 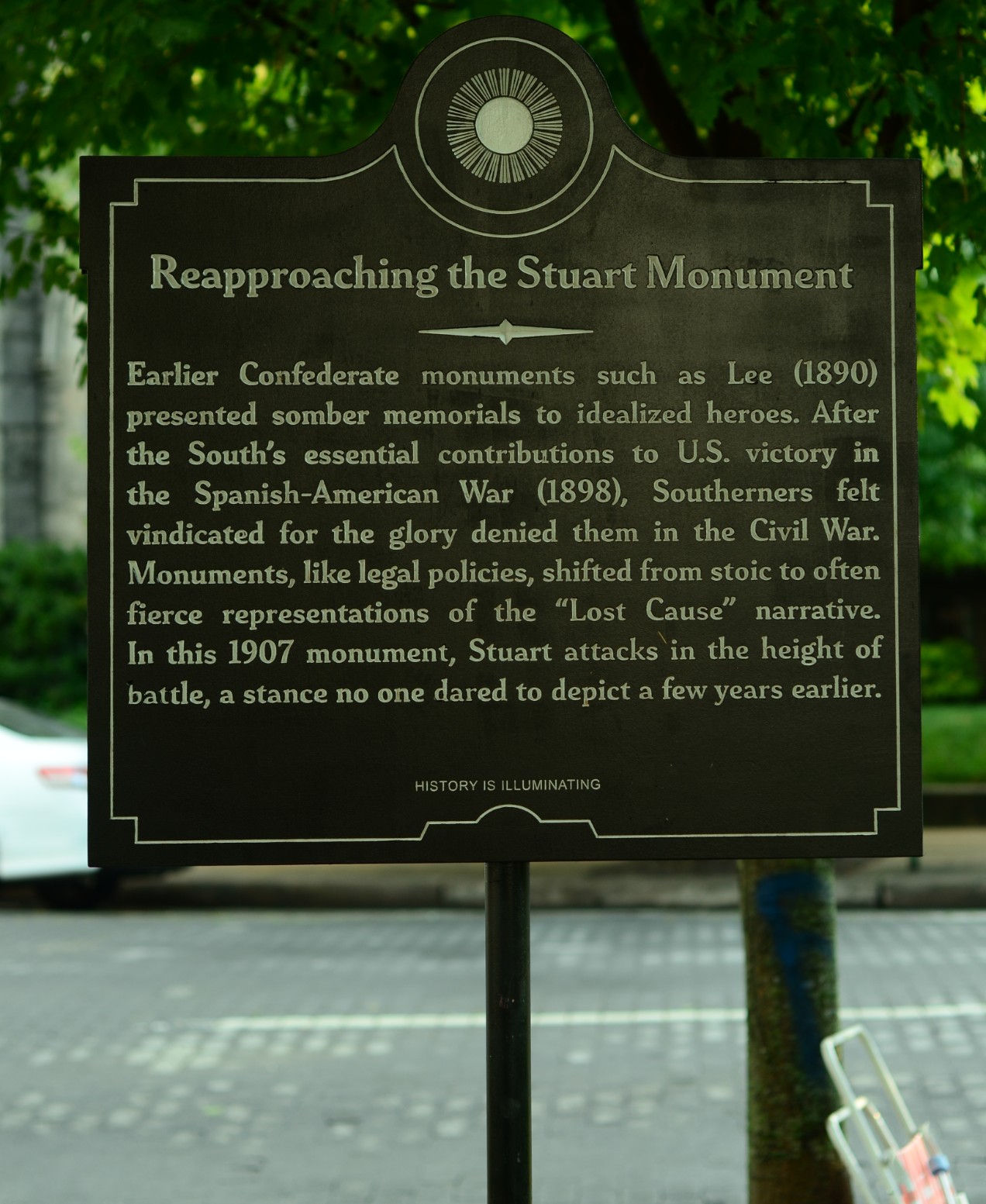 They are rogue because they are anonymous and unsanctioned. They go by a more formal name: History is Illuminating, and for days, they have been secretly putting up markers along Monument Avenue: historical posts, using modern interpretation to contextualize why the statues went up in the first place.

About Thomas “Stonewall” Jackson, for instance, who died in 1863, two years before the war ended. 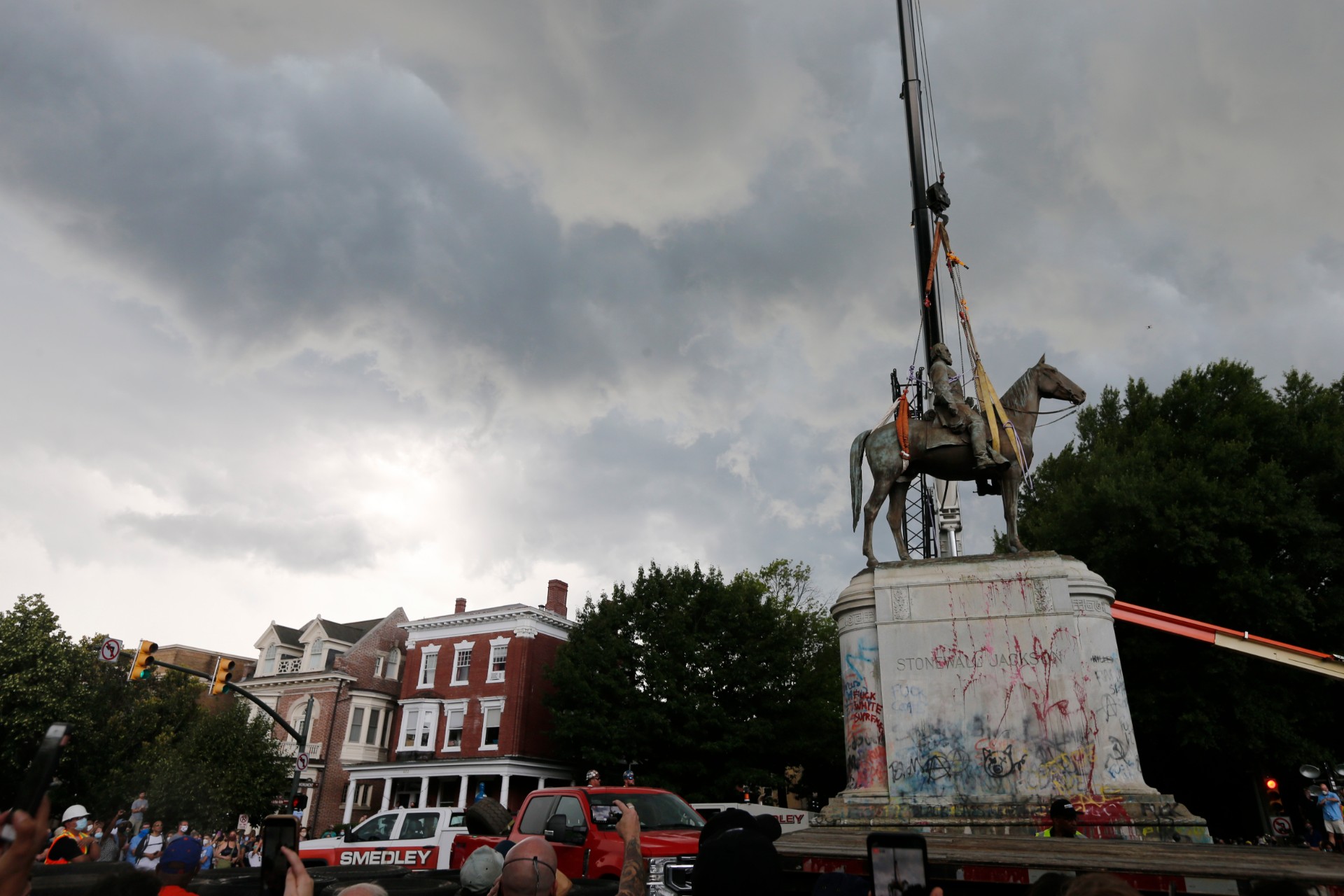 The statue of General Thomas "Stonewall" Jackson is removed in Richmond. (AP)

The History Channel begins its entry calling him “a war hero and one of the South’s most successful generals during the American Civil War.” Which he was. The “History is Illuminating” sign also notes what was happening when the statue was completed in 1919: “profound social unrest,” after an influenza pandemic and amid a rise in white nationalism.

“During the 1910s, ‘Lost Causers’ anxiously constructed statues before the last of the (Civil War) veterans died,” it reads. “While this statue celebrates a man who died defending the slave system, it also reveres a system that Jackson never lived to see — Jim Crow segregation.”

“History is Illuminating” members are all Virginians, who talked to me on condition of anonymity; a co-founder said they didn’t want attention diverted from the signs, and were concerned about safety.

A close read of their signs may lead you to object, or applaud, their historical reading; it’s unconventional — although by standards many call obsolete.

There are six markers — not just about the Confederates but also notable — and long overlooked — notable Black residents of Richmond, like its first female Black physician and a noted Black architect. “We all have the right to know what our history is, in its totality,” a co-founder emailed. “We must acknowledge the role our history has played in the lives and experiences of all of us. Only then can we begin to start on the road to justice and lasting change.”

Not everyone in Richmond agrees. Two signs have so far been ripped from the ground; another sawed off.

The group emailed: “We will be replacing them soon. But we really want people to notice this destruction and acknowledge the anger people have surrounding honest facts being brought to light.”

In a call, another member said Virginia was belatedly re-evaluating how it interpreted its history. The member, who is in her 30s, told me her history teacher in high school called the Civil War “the war of northern aggression”, and that until the 1980s history books characterized slaves as happy.

She said abruptly removing monuments, leaving nothing but empty pedestals, would only harden pre-existing views.

"All the people who are on the 'monument should stay' side have been told the exact same stories their entire life,” she said.

Approximating their voice, she said, “it seems like we're just giving into ‘those crazy protesters in the streets',” she said. They would think the removals are from political correctness or “cancel” culture.

“If it's just people having their own circular conversations over and over, rather than having new information introduced or being pushed into conversations with people they haven't traditionally spoken with, then it's not going to ever change,” she said.

The group concedes the posts are technically not lawful, but they haven’t heard objections from City Hall, which didn’t return my call. They say going through official channels would have taken too much time.

More statues are falling in Richmond and elsewhere, in the U.S. and Europe.  Not just Confederates; demonstrators are tearing down Christopher Columbus and eyeing others whose momentous distinctions came through — or while — subjugating Indigenous people, African-Americans and women. Even the city of Columbus, Ohio officially removed its namesake’s statue outside City Hall.  In a possible case of retaliation, a statue of Frederick Douglass was recently ripped down by unknown vandals in Rochester. 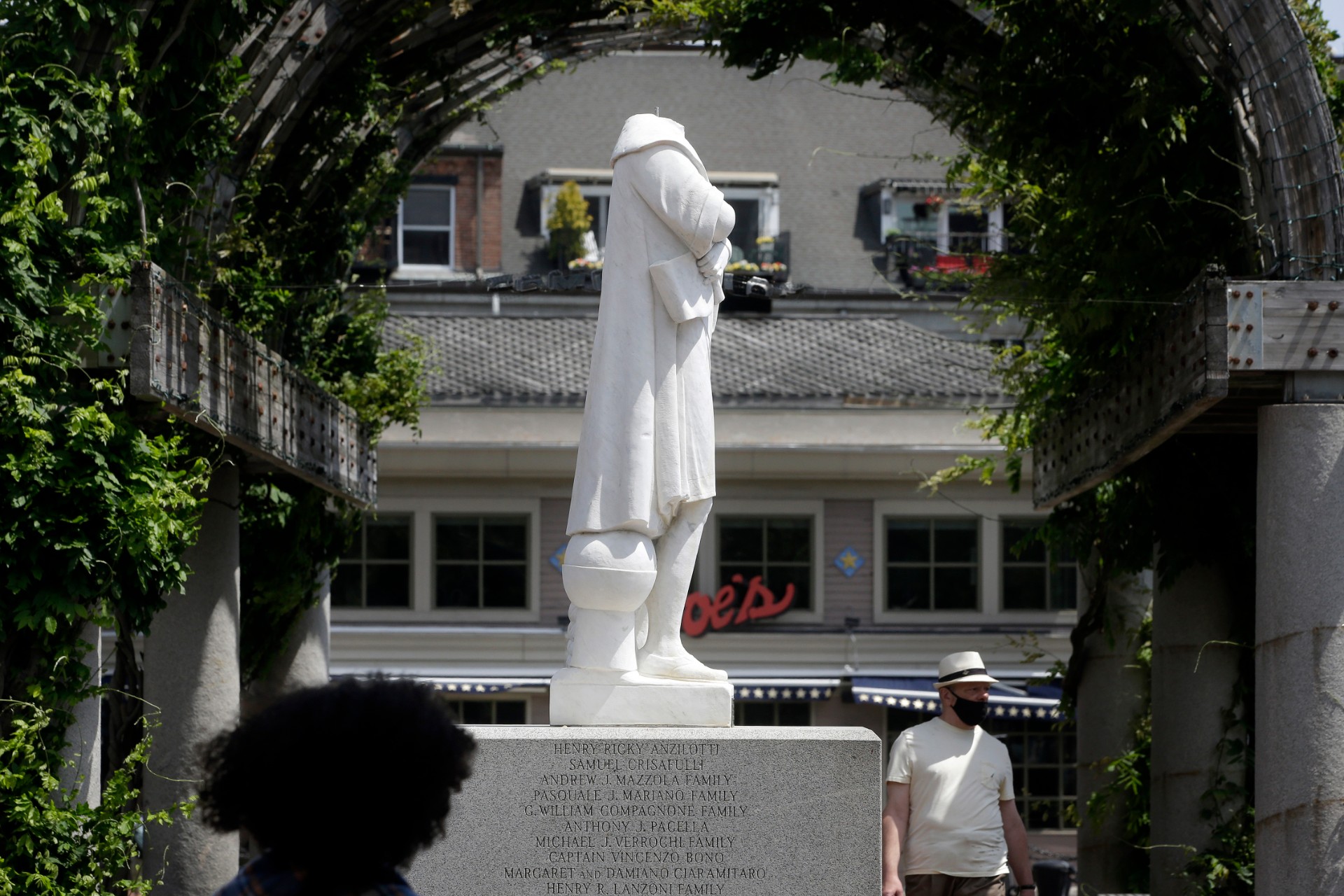 A statue of Christopher Columbus after it was beheaded during protests in Boston. (AP)

A day doesn’t seem to pass without an article about the merits of removing the Jefferson Memorial or the Washington Monument. Or when I am not told that this is a slippery slope; is Washington State to change its name next? The blowback is increasingly figuring into President Trump’s re-election strategy.

She recently served on a commission reviewing New York City monuments, a majority of which recommended leaving the statue atop Manhattan’s Columbus Circle intact, but fostering more public dialogue.

Stressing she doesn’t mean the Confederate memorials shouldn’t come down, she adds: “I think it's dangerous to act in the heat of the moment under any circumstances.”

“Let's think about how we should do this and whether there are any principles,” she said. “These are all teachable monuments.”

“Teachable monuments” could include historical posts of the kind History is Illuminating is erecting, perhaps with a bit more consensus and the accelerated approval of local elected officials, to take advantage of this pivotal moment.

Or, perhaps, new monuments will rise. Maybe they could be more subtle explorations of our shared history, rather than the oversized statues and edifices that dot our nation’s public spaces.

Hero worship is real; but opinions of fellow humans tend to corrode over time — and often much faster than marble and bronze.