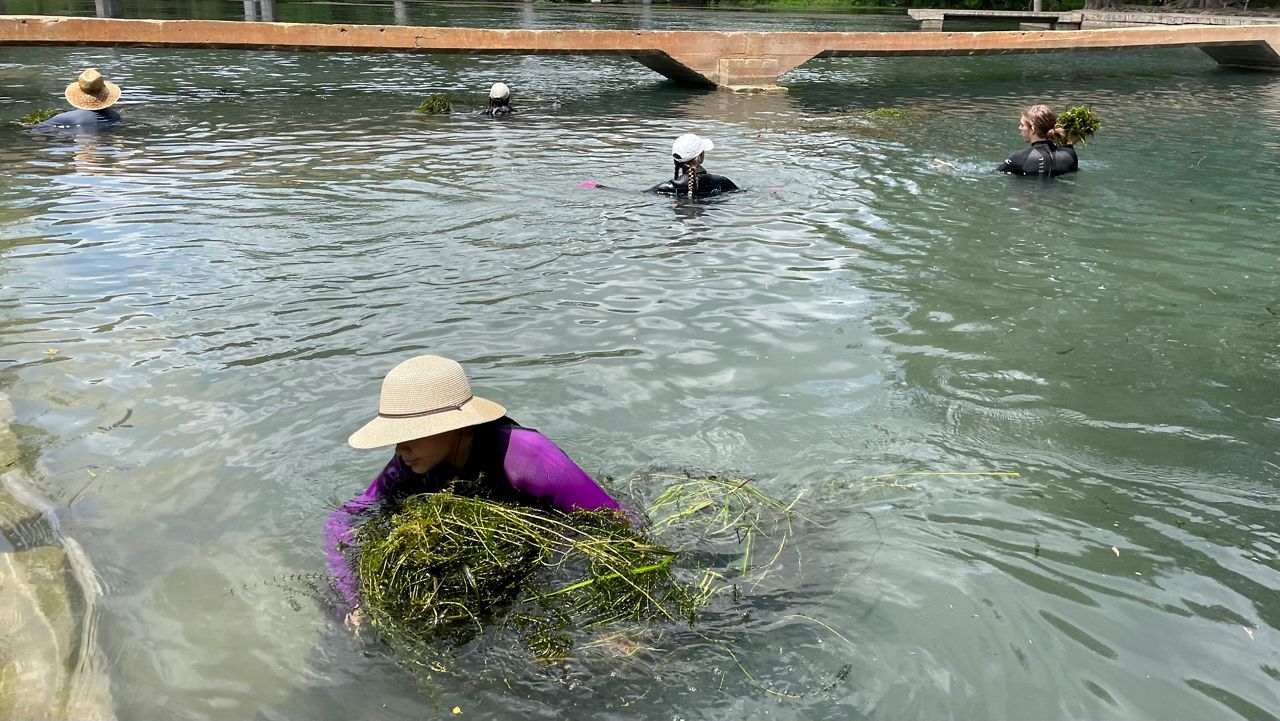 SAN MARCOS, Texas – The effort to remove an invasive plant called hydrilla from the San Marcos River is almost complete. Conservationists with The Meadows Center are working to remove the last, dense stand of hydrilla.

“We can go back and we can tell the Edwards Aquifer Authority, our program managers, that we have accomplished something very exciting today,” said Melani Howard, the habitat conservation plan manager with Texas State University and the City of San Marcos.

It’s believed that hydrilla was introduced to the San Marcos River to be farmed for aquariums in the 1970s.

“Once you have a plant in this type of environment and you don’t have it entirely isolated, it will thrive given the conditions of the San Marcos River: Constant temperature year-round, adequate sunlight, high water clarity,” said Collin Garoutte, a grant specialist with the Meadows Center. “So it found a way and it spread like wildfire over the decades.”

The effort to remove hydrilla is part of the Edwards Aquifer Habitat Conservation Plan.

“This is a federal plan that was put together to cover ‘take’ of endangered species. ‘Take’ is any kind of disturbance," said Howard. "We have fountain darters, we have Texas Wild Rice, and we have the San Marcos Salamander, all in the San Marcos River and some in the Comal River. These are protected, federally and in the state. And for us to have the amount of recreation we have and some other activities as well, in order to include pumping, we need a federal permit to proceed with those activities because they do cause disturbance to the endangered species. That’s a habitat conservation plan. That’s what we’re implementing, and these are the measures within it: the removal of aquatic plants and the removal of invasive fish.”

The protected species make conservation work like this possible. Their status ensures that cities and agriculture businesses cannot freely and overly pump water from the Edwards Aquifer.

“If you pump the Aquifer low enough then you lose flow in the San Marcos and the Comal rivers, so we wouldn’t have this lovely place to recreate,” Howard said.

Participating in this effort is a rewarding experience for the students and volunteers who are involved.

“It’s really fulfilling to see it’s just improving with every day that we go out there,” said Heather Hinchliffe, a student worker with The Meadows Center.

“We’re trying to restore the habitat by removing invasive species from the San Marcos River so we can start clearing out the river for native species like the endangered Texas Wild Rice or the San Marcos Salamander,” said Nicholas Purifoy, the project and event coordinator intern with the Texas Conservation Alliance.

“We’re finding the fruits of our top-down removal strategy really taking place,” said Garoutte. “We’re seeing native species propagate on their own. It’s a very exciting time to be part of this crew.”

Once this last, dense patch of hydrilla is removed, the team will just go back for maintenance.

“We’re hoping that with this type of removal process going back repeatedly and clearing these areas that we bulk removed, that we have a functional eradication taking place where that species is still maybe present, but not actively growing as if it was having free range over the river,” said Garoutte.

Checking up on hydrilla roots and sprouts will happen for the foreseeable future.

“We have our work cut out for us over this year and next year," said Garoutte. "But we’re hoping by 2023 to have most of the bulk removed from the San Marcos River. And then from 2023 on to 2027, we will be in maintenance mode.”